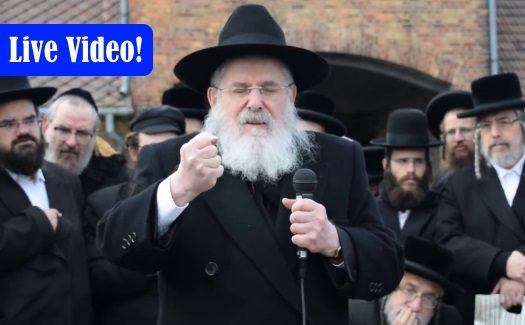 A standing room only crowd is expected tonight, Monday, to hear Rabbi Nissen Mangel, a prominent holocaust survivor, recount his survival from Auschwitz. Rabbi Mangel will speak at an event organized by Chabad at Virginia Tech in honor of Professor Liviu Librescu – also a holocaust survivor – who was murdered 10 years ago when he barricaded the door of his classroom during America’s worst school shooting, enabling his 22 students to escape.

April 24 is a significant date for the event as it is both the 10th (Hebrew calendar) anniversary of Librescu’s murder and Holocaust Remembrance Day. Lionel Arie Librescu, son of Liviu, will also be speaking at this event.

Rabbi Zvi Yaakov Zwiebel, co-director of Virginia Tech’s Chabad student center, now named in Librescu’s honor, shared: “In addition to being an exceptional scientist, the late professor was also known to be a proud Jew and an exceptionally kindhearted man. He left a legacy as a Jew, a witness to the worst of humanity, and an example of the best we can be,” said Zwiebel. “This memorial lecture, and the Chabad student center, help perpetuate his legacy.”

Lionel Arie Librescu said that his father would be confused by the event in his memory. “My father would never understand what the fuss was all about, because he only did what he though was right.”

“An evening in his honor is something special,” continued Librescu, “and to have a Chabad center named after him, where students can gather and learn about their heritage, is incredible.”

Click here to watch a recent video of Rabbi Mangel revisiting Auschwitz and recounting his memories, which has gone viral.