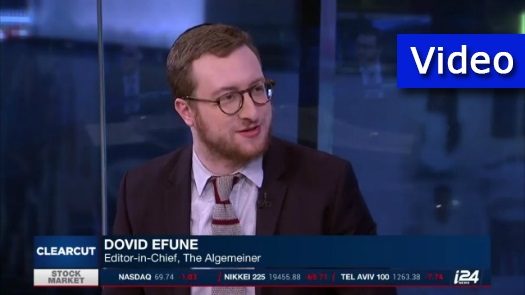 While Chinese President Xi Jinping called for a two-state solution “as soon as possible” during his meeting in Beijing this week with visiting Israeli Prime Minister Benjamin Netanyahu, Middle East peacemaking is not a priority for the Asian power, the editor-in-chief of The Algemeiner said in an interview with i24 News on Tuesday.

“China is not leading on this issue, even though they’re speaking to the issue now” Dovid Efune told “Clearcut” anchorwoman Michelle Makori. “They are best sticking out of this, focusing on business in the Israeli relationship.”

Furthermore, Efune noted, “On the Israeli-Palestinian issue, there never really has been another serious player besides for the US, and I don’t think that’s very likely to change. Even if China is becoming more vocal, on the ground they just don’t have the infrastructure and the resources to have that serious influence.”

At his meeting with Xi, Netanyahu said, “We admire China’s capabilities, its position on the world stage and in history. We have always believed, as we discussed on my previous visit [in May 2013], that Israel can be a partner, a junior partner, but a perfect partner for China in the development of a variety of technologies that change the way we live, how long we live, how healthy we live, the water we drink, the food we eat, the milk that we drink — in every area. There are vast and rapid changes in technology, which Israel excels in that we believe that we could cooperate in.”

Watch an excerpt from Efune’s i24 News interview below: