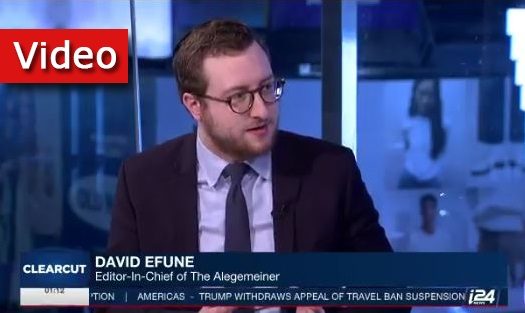 The biggest challenge facing the Trump administration in terms of confronting ISIS is how to do so without benefiting Iran, the editor-in-chief of The Algemeiner, Dovid Efune, said in an interview with i24 News on Thursday.

Asked by anchorwoman Michelle Makori about how the US could achieve the goals of both taking on Iran while also wiping out ISIS, Dovid Efune replied, “[Israeli] Prime Minister [Benjamin] Netanyahu has said this — when your enemies are fighting each other, you do not strengthen one of them, you weaken both. The challenge for the new national security apparatus, from the president down is going to be how do you stem the threat of ISIS while ensuring that Iran is not empowered in the process. And I think we’re beginning to see what the beginning stages of what that strategy might look like. And that involves prying Iran and Russia apart [and] isolating Iran from Russia and the international community.”

Regarding the regional approach to Israeli-Palestinian peacemaking touted by Netanyahu and President Donald Trump at their joint White House press conference this week and the developments that have taken place since the Arab Peace Initiative was first offered a decade and a half ago, Efune said, “The key thing that has changed is that on their own some of these [Arab] states are coming towards Israel’s side. Look, the greatest threat in the region for all of the moderate Sunni Arab states is Iran. The only hope that they really have to contain Iran is US and Israeli weaponry, yes, as a final resort, but also pressure and sanctions on the international stage. They need a lot from Israel. They recognize the value of Israel. They recognize the value of Israel to the US and the value of that alliance. It’s a very different dynamic today and for that reason I think we’re going to see a completely different tone from them.”