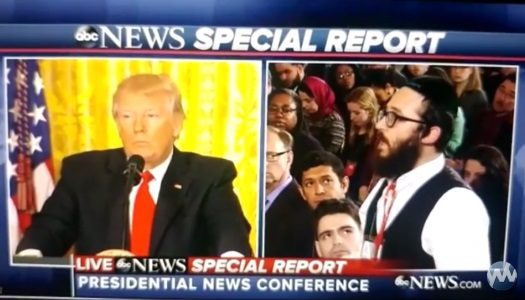 President Donald Trump shouted down an Orthodox-Jewish reporter at today’s White House press conference, after he began asking Trump about the rise of anti-Semitic incidents across the United States.

Jake Turx, a Frum reporter covering the White House, was called on by President Trump at Thursday’s press conference.

Turx began asking Trump about the rise of anti-Semitic incidents across the United States.

“Bomb threats have been made against Jewish Centers all across the country the last couple of weeks….There are people who are committing anti-Semitic acts or threatening…”

At that point, Trump cut Turx off while he was asking the question and said “sit down, I know the rest of your question”.

When Turx tried to finish, Trump told him “Quiet, quiet”, and then called Turx a “liar”.

Trump ended his answer by calling his question “insulting”.

Turx has since tweeted “President Trump clearly misunderstood my question. This is highly regretful and I’m going to seek clarification. #TrumpNewsConference.