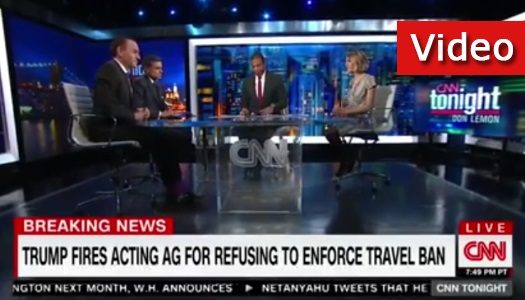 The influence of Jared Kushner’s Shabbat observance on his father-in-law President Donald Trump’s behavior was the subject of a brief discussion earlier this week by a CNN panel.

Kushner — a 36-year-old Orthodox Jew who is married to Trump’s daughter Ivanka — serves as a senior adviser to the president.

Last week, a source close to the Trump family told Vanity Fair that it was “not a coincidence” that Trump’s media troubles surged the day after his inauguration — a Saturday when Kushner was out of contact with him.

On Monday, Vanity Fair reporter Emily Jane Fox appeared on CNN and brought up the issue. As the discussion continued, Professor Alan Dershowitz chimed in, saying, “As the only one on this panel who has ever celebrated Shabbat with Jared Kushner — he was the president of the Chabad society at Harvard when I was the faculty adviser — I can tell you that he is a source of wisdom and I think of trying to influence Donald Trump in the right direction. I don’t know whether the timing and the chronology works out exactly that way, but I do think that he will be a source of trying to be a check on Donald Trump.”

Watch the exchange below: