« College Students Conclude JewFest Weekend at Ohel
Video: How Can One Merit to See G-d? » 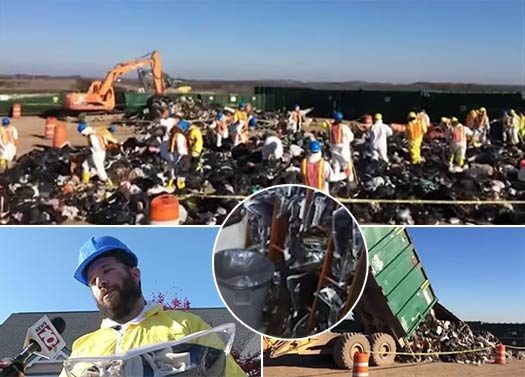 Dozens of volunteers have been hard at work for over two days sifting through tons of trash in an upstate landfill in an effort to locate a set of Tallis and Tefillin – that had been initially thought to have been stolen, which surveillance video revealed had actually fallen into a trashcan.

Dozens of volunteers from the Williamsburg Shul where the Tefillin went missing from traveled to an landfill in Buffalo, New York in an effort to locate the missing religious items.

Initially they were thought to have been stolen, but a review of the surveillance video showed them falling into a trashcan.

Working together with New York City Sanitation they were able to pinpoint the likely haul that the items would be in and the group has been combing through the containers one at a time in an effort to locate them.

“It’s devastating and it’s very sad because you want that sentimental item, first of all for the holiness of the item, you don’t want it being tossed and who knows where it’s going to end up landing at the end of the day,” Issac Neuwirth told a local news stattion. “So, we want to prevent that and the second thing is he wants the item that he wore all these years that he prayed with to God, he wants to keep doing it with the same exact clothing that he did.”

So far they have not been successful in locating the items, but they have only been through half the haul and are still hopeful they will locate them.

Waste Management and a private donor have each offered up $1,000 to the person who finds the items.

« College Students Conclude JewFest Weekend at Ohel
Video: How Can One Merit to See G-d? »