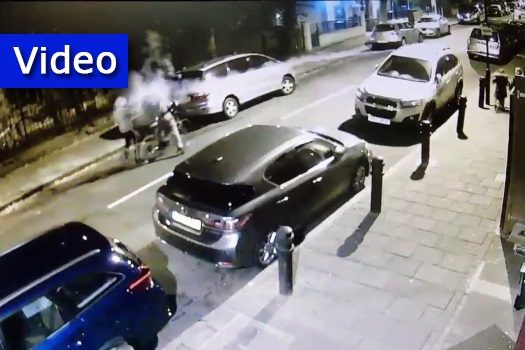 In a shocking attack caught on video, a group of thugs aimed dangerous fireworks at a group of innocent Jewish children passing by in Stamford Hill, London, injuring one of them.

Shomrim of Stamford Hill tell YWN that the troubling incident occurred on Friday night Shabbos Chol Hamoed at around 7:45PM in the area of Cranwich Road near Dunsmure Road in the heart of Stamford Hill, London.

A group of children were walking down the street when a group of thugs suddenly lit fireworks and aimed it at the children.

An 8 year old girl was struck by the flaming balls which burned holes through her clothing. She suffered minor burns on her leg.

She is a Canadian citizen who was spending Yom Tov in London by her grandparents.

A Jewish pedestrian who witnessed the attack, ran over to confront and apprehend one of the suspects. Unfortunately, the man was surrounded by the group of thugs who forced the suspect free. They all fled the crime scene before police arrived.

Shockingly, the CST  – which is the government funded security guards patrolling the area – not only refused to intervene, but refused to call police as well.

The Hackney Police Department arrived and interviewed the victim.

A piece of burned clothing was reportedly taken as evidence, and an investigation is underway.