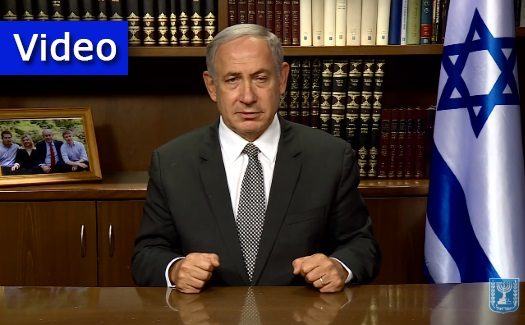 Israeli Prime Minister Benjamin Netanyahu reveals that the Palestinian leadership demands a Palestinian state with only one pre-condition: No Jews. “Ask yourself this: Would you accept ethnic cleansing in your state? A territory without Jews, without Hispanics, without Blacks?” He challenges.

A full transcript of the video:

I’m sure many of you have heard the claim that Jewish communities in Judea Samaria, the West Bank, are an obstacle to peace.

I’ve always been perplexed by this notion.

Because no one would seriously claim that the nearly two million Arabs living inside Israel – that they’re an obstacle to peace. That’s because they aren’t. On the contrary.

Israel’s diversity shows its openness and readiness for peace.

Yet the Palestinian leadership actually demands a Palestinian state with one pre-condition: No Jews.

There’s a phrase for that: It’s called ethnic cleansing.

Some otherwise enlightened countries even promote this outrage.

Ask yourself this: Would you accept ethnic cleansing in your state? A territory without Jews, without Hispanics, without blacks?

Since when is bigotry a foundation for peace?

At this moment, Jewish schoolchildren in Judea Samaria are playing in sandboxes with their friends.

Does their presence make peace impossible?

I don’t think so.

I think what makes peace impossible is intolerance of others.

Societies that respect all people are the ones that pursue peace.

I envision a Middle East where young Arabs and young Jews learn together, work together, live together side by side in peace.

So the next time you hear someone say Jews can’t live somewhere, let alone in their ancestral homeland, take a moment to think of the implications.

Ethnic cleansing for peace is absurd.

It’s about time somebody said it.