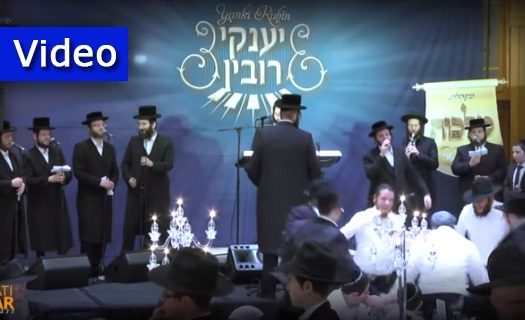 A private family simcha has morphed into a public salute to the revival of Russian Jewry.

Some 20 Admurim, spiritual leaders of Chassidic courts, participated in the Sheva Brachos for the son of Russia’s Chief Rabbi Berel Lazar held at the Keter Harimon hall in Bnei Brak, Sunday.

It was an opportunity for them to salute the years of self-sacrifice of the Rebbe’s chassidim during the Soviet regime and the tireless work after the fall of the Iron Curtain to rekindle the Jewish flame.

One of the people who can testify about the radical change is Bnei Brak Rabbi Moshe Landa whose father was a chossid of the Rebbe Rashab and who himself helped develop the current Kosher certification of Russia’s Rabbinate.

They were joined by Chabad Rabbis, Shluchim from Russia and elsewhere, supporters, friends and family members.

In his remarks, Rabbi Lazar spoke of the upcoming holiday of Purim and the need to deliver Mishloach Manos event to unfamiliar Jews, “to bring them close in a loving way to our father in Heaven.”

The event was entertained by the Malchus choir, Zanvil Weinberger and Yanky Rubin on the keyboard, joined by child star Avrohom Baruch Machlin, a student in Chabad’s Cheder Menachem in Moscow. It was produced by Mordechai Rabinowitz of Tip Productions.