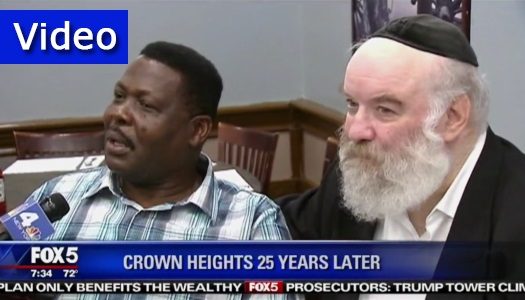 Carmel Cato, whose son Gavin died after he was hit by a Chasidic Jewish driver in August of 1991, and Professor Norman Rosenbaum, whose brother was murdered in the riots that ensued, have reunited ahead of the 25th anniversary of the Crown Heights Riots to denounce violence of all forms and to discuss healing between the two communities.

Carmel Cato and Professor Norman Rosenbaum haven’t seen each other in five years. But their bond goes back to August 1991 and the Crown Heights riots in Brooklyn.

Cato’s 7-year-old son Gavin was killed when a station wagon came onto the sidewalk and crashed into him while he was fixing his bike. His 7-year-old cousin Angela was also hit but survived.

The accident touched off three days of riots between August 19 and August 21 by mostly African American residents angered that the driver of the station wagon was Jewish.

In the ensuing melee, Rosenbaum’s brother Yankel was murdered. He was an innocent man targeted only because he was Jewish.