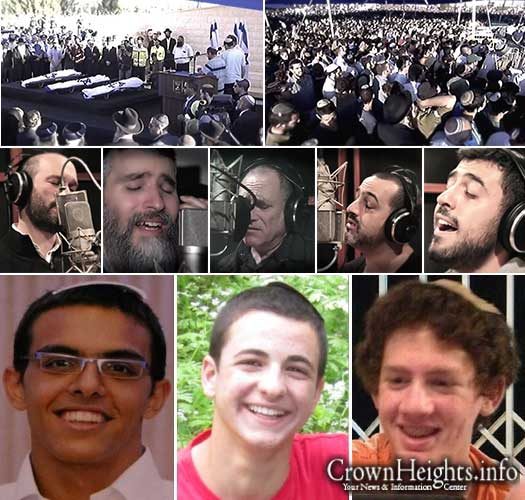 Exactly two years ago, three Israeli teenagers, Eyal Yifrach, 19, Gilad Shaar, 16, and Naftali Frankel, 16, were kidnapped and their bodies were found 18 days later in a horrific incident which unified the nation and drew outrage around the world.

Today, six artists released a song in their memory. With lyrics based on the names of the victims, the song calls for comfort and peace.

Posted on his Facebook page, Avraham Fried wrote “we remember well how their passing brought us together as a people, with love and unity, and their parents continue to shine and share their holy light that inspires us till this very day.

“’Open Your heart with mercy for Your children, let their voices be heard for generations to come, in the heavens Your words are everlasting, and here on earth grant us comfort and consolation,’” he concluded.

The beautiful, stirring song was composed by David D’aor Keinon and Shlomo Ilan. It is sung by David and Kobi Aflalo, David Broza, Yonatan Razel, Yishai Ribo and Avraham Fried. It was written in the teens’ memory in the hopes that it would be a stage to bring to unity in the Jewish nation.