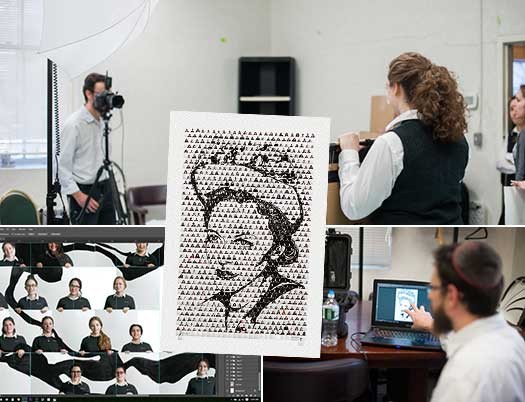 1000 individual portraits of high school students holding up a portion of what – combined – made up an amazing portrait of Rebbetzin Chaya Mushka. This amazing feat, coordinated by photographer Chaim Perl, was this years group photo for the high school convention and we take a behind the scenes look of how it was created.

The annual Chabad Girls High School Convention is a weekend dedicated to emulating the ways of Rebbetzin Chaya Mushka. This year’s convention took place over the Shabbos of Chof Hey Adar Alef, corresponding to The Rebbetzin’s birthday.

Rebbetzin Chaya Mushka is a woman who truly represents how a Jewish and Lubavitch girl should behave. Many stories have been told of her modesty, her kindness, her support of The Rebbe, and the way she exemplified the idea of a Bas Melech. She is a role model to every Lubavitch girl and someone to look up to and try to follow in her footsteps.

With such an important message to bring across, there was no better way to conduct the grand convention photo than by uniting the Lubavitch girls of today in The Rebbetzin’s image.

In the true spirit of Hakhel every individual girl joined together, picture by picture, to create a giant mural of Rebbetzin Chaya Mushka. A special black and white painting of The Rebbetzin was made to be broken down into 1000 pieces.

With the help of the Bais Rivka High School girls, each of those pieces were repainted on even larger papers. Every girl participating in the convention was then photographed with her piece of the picture, and all of those pictures were digitally pieced together to produce an inspirational mural of The Rebbetzin.

A lot of effort and hard work was put into this to make this happen and everyone was anxious to see the final results. 1000 photos and countless hours later, the grand high school convention photo was completed. At first glance, it looks like just another picture of Rebbetzin Chaya Mushka.

However, by taking a closer look, every girl is able to find herself in The Rebbetzin and see what she represents.

During the Motzei Shabbos program, the girls were asked to think about one special thing they learned from the Rebbetzin over convention. Each girl texted in her answer to a designated number and these answers were collected and compiled to create the border of this picture.

Looking at the picture, a girl will not only be able to see herself in the image of the Rebbetzin, but she will also be able to apply that when she reads all the incredible virtues that the Rebbetzin exemplified.

Every girl received a smaller version of this photo to take home and IY”H every participating school will get a giant print to hang up on the school walls. This incredible mural of the Rebbetzin, featuring Lubavitch girls from across the globe, is a picture that we hope can make the Rebbe proud.

This project was created, directed and photographed by Chaim Perl.

Special thanks to Art Director Estee Klein who drew this original picture of The Rebbetzin and instructed the girls on how to transform it into life size pieces.

The project would not have taken place if not for the dedication of Mrs. Sara Blau and the other convention organizers – Malky Lerman, Chaya Mushka Abrahams, and Manya Dubrawsky.