« Here’s My Story: A Humble Office in Brooklyn
Picture of the Day: Shliach Creatively Battles BDS » 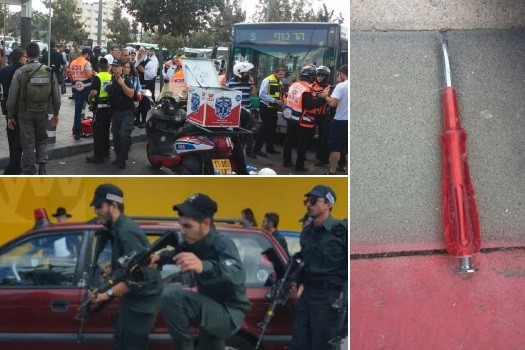 At around noon a Palestinian assailant stabbed an Israeli man on Bar Lev Street in Jerusalem, wounding him seriously. Paramedics who rushed to the scene said that the Israeli, a 25-year-old male, suffered wounds to his upper body, though no other specifics were provided. The victim was rushed to Shaare Zedek Medical Center in Jerusalem for treatment. The terrorist is said to be an Arab juvenile about 15-year-old. He is in custody.

A little before 3:00pm, an Arab terrorist stabbed four people with a screwdriver in Tel Aviv. A female soldier was among the wounded, all of them lightly injured. The terrorist fled and was shot dead a few hundred meters away.

A short while later, a 25-year-old Jewish man was stabbed in Kiryat Arba, located adjacent to the holy city of Chevron. The victim was seriously wounded with stab wounds to his back. The attacker escaped back into Chevron and eluded capture.

Update: At around 7:15pm, a Palestinian stabbed an IDF soldier in the Northern Israeli city of Afula, in the 4th such attack today, and the 7th in two days.

The soldier was moderately wounded in the attack.

The assailant was apprehended at the scene

« Here’s My Story: A Humble Office in Brooklyn
Picture of the Day: Shliach Creatively Battles BDS »