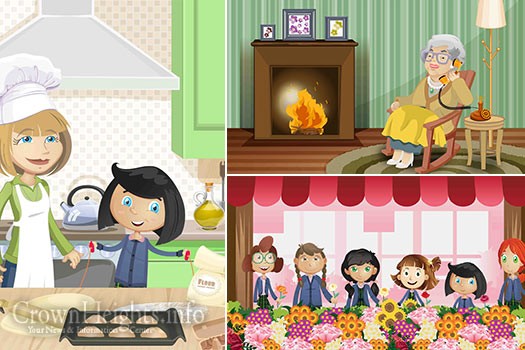 Following the huge success of “Bella Brocha goes to a wedding” there was no doubt in anyone’s mind that a sequel would have to come out.

Yet it didn’t take long after the first was released, that parents came up to producer, Chaim Hershkowitz and implore for the second. Comments such as , “I’ve been humming I’m going to a wedding.. a wedding..” at work are not uncommon for Hershkowitz to hear. However, this second DVD won’t let you down! “Bella Brocha and The Talent Show!” has quick and catchy tunes that kids are sure to be singing and dancing to!

With the generous support of David and Malkie Smetana, Hershkowitz has been busy putting out DVDs to the delight of children worldwide and all ages. Living in a day and age where videos are a powerful medium, it is vital that kids should have educational and fun DVD’s to watch. In this DVD Bella Brocha and her friends get ready for the “Torah Talent show.” Some of the girls are very excited to perform live on stage but others can use a little more confidence. Bella Brocha and her friends learn the value of teamwork and working together.

Singer Chanale Fellig, who wrote the script and songs on the first DVD did an amazing job. Once again, She created original songs and a great script that’s funny and has lots of good lessons. Chanale explained that as a mother herself, it comes “easy” to create a series like this. She especially enjoys being a part of this because it is so rewarding to see the positive impact it has on other children, which makes it very special.

“Bella Brocha and The Talent Show” is now available in stores and online at mostlymusic.com and TorahTreaure.com