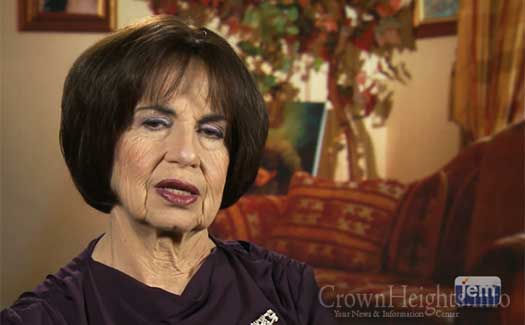 In an interview conducted in 2012, Mrs. Brana Shaina Deitsch recalls how the Rebbe taught the Niggun Shamiel on Simchas Torah, 5719.

The interview with Mrs. Deitsch, who passed away yesterday at age 72, is one of some two hundred enabled through the generosity of her son, Haysha Deitsch, through his funding of the My Encounter with the Rebbe interview studio.

The vivid memory of the Rebbe teaching Shamiel was an experience Mrs. Deitsch would retell throughout her life, and her children sang the beautiful Niggun at their mother’s bedside as she returned her Neshama to its creator.

Aptly, a day after her passing, the Deitsch family and JEM announced that the My Encounter interview space will be renamed the Brana Shaina Deitsch Studios. In her memory, hundreds more precious interviews and thousands of timeless moments with the Rebbe will be documented for posterity, and shared with Chasidim and Klal Yisrael around the world.