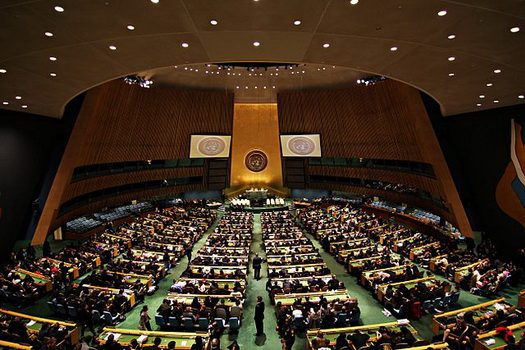 What the Rebbe Thought of the U.N.

Many of us consider the United Nations (referred to as “the UN”) to be an organization that is heavily biased against Eretz Yisrael. We are disappointed with the blatant antisemitism in so many of their declarations and resolutions. Former Prime Minister Bibi Netanyahu often repeats the Rebbe’s statement to him one Simchas Torah night during the period in which he was stationed at the UN—that his mission was to bring light to the “House of Lies.”

While this is an unfortunate truth, the Rebbe also saw this organization as an incredible tool for good. The Rebbe considered the formation of the UN, its choice of location, and even the quote carved into the UN’s symbolic wall within the UN compound, to be of deep significance.

The question of how such a positive entity can frequently opt for such negative choices is one of many paradoxes of Golus. Today, we will focus on the positive elements of this organization and learn what the Rebbe said about the UN in one of the last farbrengens we were zoche to hear from the Rebbe—on Shabbos Parshas Mishpatim, Chof Zayin Shevat, 5752, exactly one month to the day before Chof Zayin Adar.

But first, a bit of history:

As World War II was about to end in 1945, nations were in ruins, and the world wanted peace. Representatives of 50 countries gathered at the United Nations Conference on International Organization in San Francisco, California from 25 April to 26 June 1945. For the next two months, they proceeded to draft and then sign the UN Charter, which created a new international organization, the United Nations, which, it was hoped, would prevent another world war like the one they had just lived through.

Four months after the San Francisco Conference ended, the United Nations officially began, on 24 October 1945, when it came into existence after its Charter had been ratified by China, France, the Soviet Union, the United Kingdom, the United States, and by a majority of other signatories.

The General Assembly selected New York City as the site for the headquarters of the U.N., and after a few years of building, the U.N. headquarters opened in Manhattan in 1952.

Why in New York? The politicians might have had their explanations. However, the Rebbe tells us the true answer: “The true reason for setting it up in NYC is because it is the headquarters of . . . my father-in-law, the Rebbe, the nasi of our generation.”

The United Nations, an organization designed to promote unity and peace between the world’s nations, was established in the Western Hemisphere [“in the lower half of the planet”] shortly after the arrival of nasi dorenu to this region. It began with the acceptance of the Declaration during the [Second World] War, in approximately the year 5702 [January 1, 1942] and was advanced chiefly at the war’s conclusion, in approx. the year 5705 [at the Conference of 1945]. It was then decided to build its headquarters in the city of nasi dorenu, as a result of which a unique building was erected [to house the organization], in approx. the year 5711 [the early fifties].

These events serve to highlight the reality that the unity and peace among the nations is an outcome of nasi dorenu’s activities to purify the world (through spreading Torah, Yiddishkeit, righteousness, and justice globally).

Therefore, the more the nasi dorenu accomplishes in terms of spiritually refining the world, the greater is the UN’s establishment and success in achieving its goal of achieving unity and peace in the world—until the world’s refinement is completed and perfected through the fulfillment of the prophecy that “they shall beat their swords into ploughshares” (the verse carved into the wall of UN building).”

The sources we just read are a few of the many incredible statements the Rebbe said in that farbrengen. What we see here is how the Rebbe opens up to our eyes to a deeper reality behind current events. Events that we might consider random, or decisions made by international bodies, are actually the activities of nasi dorenu, who is orchestrating world events as part of the incredible mission of bringing the Geulah.

Our challenge is to never allow the news cycle, or the theories of thinkers and writers from the secular world, to dominate our perspectives. A Chasid has the Rebbe’s gift of a bird’s-eye view that enables us to see events for what they really are: the Rebbe bringing us closer to the immediate revelation of Mashiach.

To print for your Shabbos table: https://drive.google.com/file/d/1JG4E5WqlBUXU1OwK_gfifz15lwJTFQD0/view?usp=sharing