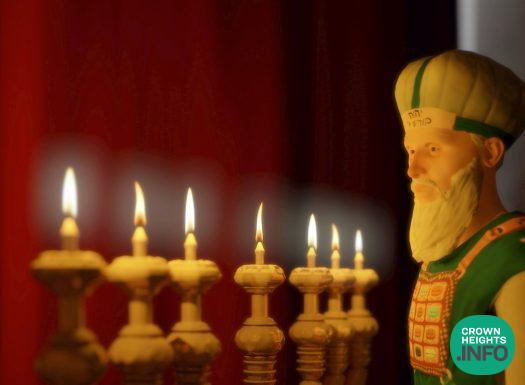 Weekly Dvar Torah: A Menorah And A Menorah

On Chanukah we commemorate the miracle of the small pure flask of oil which had enough oil to last for one day, miraculously the Menorah continued to burn for eight days, until they were able to produce a new batch of pure oil to kindle the Menorah.

1) in the Temple the candelabra was made of seven branches, the Chanukah Menorah has eight.

2) in the Temple they lit seven candles every day consistently, on Chanukah we increase and add another candle each day.

3) in the Temple the Menorah was lit indoors, on Chanukah we light outdoors.

4) in the Temple we lit the candles in the daytime, on Chanukah we light in the evening.

Why so different, if it’s about the Menorah of the Temple, shouldn’t we light a Menorah just like in the Temple?

The Jewish people realized that the Greeks tried to darken the G-dly light, do as you please, keep the traditions, just forget G-d, don’t use pure oil as G-d pleases, use any oil, we’ll make sure that there is no pure oil.

The Jews responded; we will light with pure oil even in this case when there is no choice, and according to the strict letter of the law we are allowed to use any oil, but since they tried to darken our connection with G-d, we will instead bring more G-dly light even to the street, we won’t limit G-d’s light to the Temple alone.

G-d responded; I support this determination, and since there isn’t enough oil, I will make sure that the oil lasts long enough, till they produce new pure oil.

Chanukah has one message; if you bring darkness, we bring light.

The Temple had seven branches, we do eight.

The Temple had the same number of candles daily, we add another candle daily.

The Temple had the candles indoors, we light outdoors.

The Temple had the candles by day, we light the Menorah at night.

We increase the light, we spread it all over, we brighten up the dark.

Chanukah means renewal, and it also means education, on Chanukah we get to renew and to educate.

To educate our children we can’t compromise, we can’t go with the flow, they want us to settle, we insist on light, and we keep adding light, in numbers, amounts, space and time.

Our message to those who seek our assimilation, don’t try, we are about light, not only won’t we settle, but we will share our light with you and we will be a light upon the nations, we constantly surge in spreading light.

And finally, the number seven represents the natural cycle, like the seven days of creation which are the limits of nature, number eight however, is rising above nature, the era of Moshiach, who will come singing with a fiddle of eight strands, overcoming the limits of nature and ushering in an era of G-dly light uninhibited by any restrictions, an era of peace and prosperity for all to see and enjoy.

Chanukah reminds of this glorious day ahead.

Have a blazing Shabbos,
Gut Shabbos