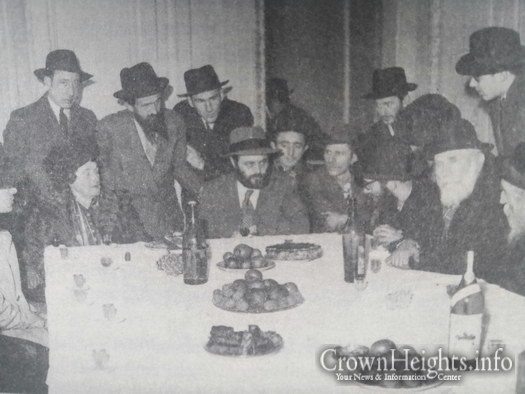 Being that this Sunday is Gimmel Tammuz, I am sharing a thought I heard from Rabbi Nissim Mangel sheyichye, this past Shabbos, which I will use in a farbrengen on Gimmel Tammuz.

This occurred in the late 50’s when he was a bochur in Tomchei Tmimim in Montreal.

When I went into yechidus after Simchas Torah, after the Rebbe answered the points I wrote on my tzetel, he told me that I should purchase a pair of Rabbeinu Tam’s tefillin, and begin wearing it. Returning to Montreal, I informed the Mashpia, Rabbi Volf Greenglass (as I slept in his house) of the Rebbe’s guidance, and I also mentioned that I don’t have the money to pay the sofer to write it.

Reb Volf didn’t think for a moment, but he immediately said, I will lend you the money and you will repay me when you are able to. In the meantime, go to Rabbi Silberman and order the parshios, and go to Rabbi Schwartz and order the batim.

Both of them were chassidishe Jews. Just that Rabbi Silberman was respectful of Lubavitch, and upon request would even write the Alter Rebbe”s ksav. However, Rabbi Schwartz, was a Satmar chossid, and he had numerous questions and arguments against Lubavitch.

Every Friday, after the seder in yeshiva concluded, I would go visit them to check on the progress and encourage them to conclude it as fast as possible.

Every week, Rabbi Schwartz would badger me about the greatness of Satmar and what he considered were the shortcomings of Lubavitch. While I replied and pointed out the unique qualities of Lubavitch and of Chassidus Chabad, he didn’t listen.

One Friday afternoon when I came to him, he said Nissim, I am becoming a Lubavitcher chossid.

Hearing that, I was positive that either he was jesting or that he decided to begin asking other sorts of questions.
But I asked him, Rabbi Schwartz, what happened?

He replied this past week, my Rebbe, the Satmar Rov was in Toronto and I went to hear him. At the tisch, he said the following:

Some of my chassidim moved to Houston Texas, and Boruch Hashem became very successful. So they asked me if I would send a shochet to slaughter for them. They will pay him nicely and it is a win-win situation.

So because you want to be careful in Satmar shechita, I should put another Jew’s life in danger? No, I can’t accept placing someone at such a tremendous risk.

Therefore, continued Rabbi Schwartz, I want to see the Lubavitcher Rebbe. He then came for the Yud Tes Kislev farbrengen

Reb Nissim continued, why is it so? Why can a Lubavitcher go into a wilderness and remain intact, and others cannot?
He then answered we can learn it from the parsha.

In the first possuk, Hashem told Moshe, shelach lecho, and Rash explains it to mean L’daaticho, which is explained to mean, If you want to send them, I allow you, inferring that Hashem personally was against it.

So the question is if Hashem was informing Moshe that He isn’t happy with sending spies, why would Moshe go ahead with it.?

However, according to the way the Alter Rebbe explains in Tanya, that daas means connection, this isn’t a question anymore. This is what Hashem was telling Moshe. “You should know that sending spies is a minefield, full of dangers. However, the only way to succeed is by sending spies that are connected (mekusher) to you. If they are connected to you, they will remain safe. Tragically, ten of them began using their own mind and at that point they became exposed to the dangers and succumbed.

The lesson from this is we , chassidei Chabad, have this unique ability to out ourselves aside, and connect to the Rebbe, and then we can go and conquer the world on his behalf. As the world says, why is a Lubavitcher able to go to a desolate place and remain intact? Because he never left 770!!

Based on this, I (Sholom Avtzon) would like to add the following thought.

Everyone asks, how is it possible that ten out of twelve hand-picked people messed up so royally?

The Ohr Hachaim explains that when a person becomes a messenger, he loses his own identity, and assumes the identity of the person who is sending him.

The twelve spies were tzaddikim, however, when they went on behalf of the request of the Jewish people, they were no longer themselves, but the messengers of the nation. The nations desire to send spies was not pure and good and that influenced the righteous spies to act in a way contrary to their own greatness..

So if this is can happen in the negative, how much more so is it in the positive. Even if a Jew is not special, but he allows himself to become the messenger of the Rebbe, then you are no longer yourself, a regular person, but you assumed his identity and then you can accomplish great things.

Let each and everyone of us fulfill the mission the Rebbe entrusted us to fulfill to bring light to the world and prepare it for the coming of Mosiach.

On Gimmel Tammuz, the administration of the Chasdei Avrohom Eliezer camp fund, in emory of my brother-in law Avrohom Eliezer hy”d Goldman, is making a campaign to raise money to help send children to camp in the summer. Please contribute at