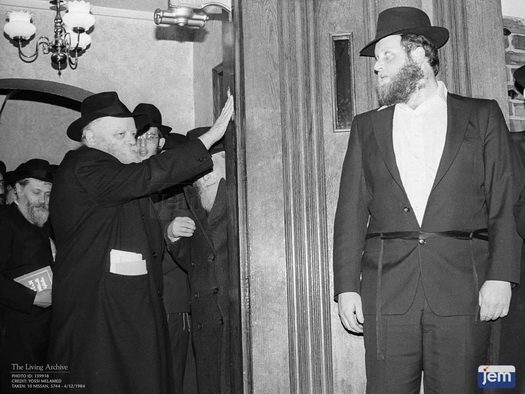 Everything in Rashi is on the level of a 5-year-old, every question should be simple and straightforward, the answer should be understood to the 5-year-old, and if Rashi does not ask a question which other commentators ask, this question doesn’t bother the 5-year-old, it may be a question to a scholar or an adult, but not to the child.

Once the Rebbe taught a Rashi on Parshas Shlach (Bamidbar 14, 36), where it talks about the 10 spies who instigated the Jews against G-d and the land, they were punished by death in a plague.

Rashi explains the meaning of the words “they returned and badmouthed him” for which they were punished, by saying that “when they returned from scouting the land they organized the people against him (Moshe) by badmouthing”.

The Rebbe asks; what was missing in the verse “they returned and badmouthed him” that Rashi has to add Moshe in the context?

This is pretty clear, they were punished for badmouthing G-d, Moses, the land; why is Rashi inserting a clarification that they instigated against Moshe?

The Rebbe explained; the 5-year-old asks, G-d is angry, He wants to kill all the Jews and Moses will replace them with a new nation, Moses prays and pleads and begs for the Jews, and ultimately G-d says, I forgive like you asked.

And the Jews are spared.

Then we learn that the 10 scouts died, they were not spared.

To which Rashi responds; “they organized the people against him (Moshe)”, therefore Moshe could not save them.

There is a known rule in life, “a prosecutor can’t become a defender”, in this case, because the sin of the spies was directed at Moshe, G-d said, you can’t defend them, their crime was against you, so you are like the prosecutor, therefore you can’t be their defender.

Concluded the Rebbe; the lesson is that Jewish leaders work tirelessly to bring blessing to all the Jews, except for those who go against them.

Rabbi Leibel Schapiro was editing this talk for the Rebbe to approve for publication, and when he got the final Sicha (booklet), he noticed that the last part which says that leaders cannot bring blessings for their opponents, was missing, the Sicha finished mid-sentence, with the message that Jewish leaders bring blessings for the entire Jewish people.

Being that he lived in Florida, he called New York to ask, what did you do to butcher my editing?

He was told, that when the Rebbe got this transcript, the Rebbe put a big X on that last paragraph.

Puzzled, the Rebbe was asked what’s wrong, isn’t this exactly what the Rebbe said?

The Rebbe responded; this is in total contrast to Chassidic thinking, burn this paper and you should never repeat this!

Moses perhaps couldn’t save his opponents, but we who learned Chassidus, this goes against our grain, there’s no such thing that a Chassidic leader becomes a prosecutor against another Jew.

This is the most powerful message that we can get from the Rebbe, Moses our greatest leader ever, he couldn’t do it, but now that we have Chassidus we can.

(Perhaps in Torah conversation and study we can complete the sentence, but to publish this forever, this cannot be repeated, because it is not applicable in today’s real life.)

Over the years the Rebbe imbued us with so much Ahavas Yisroel (absolute love of fellow Jew), and he kept reemphasizing that this is the precursor to the coming of Moshiach.

When Moshe took the Jews out of Egypt about 80% of the Jews didn’t make it out, because they went against Moshe and his prophecy that redemption is imminent.

However, Moshiach will be collecting each and every Jew hand by hand from every corner of the world, no Jew will be left behind.

That’s why Moshiach will come as a result of the spreading of the teachings of Chassidus, because this is necessary to condition us to be able to welcome Moshiach.

And the Rebbe not only taught us Chassidus, but the Rebbe lived Chassidus, the Rebbe implemented in real life what Chassidus teaches to love a Jew unconditionally, no if buts and how’s.

If there is one trait about the Rebbe that we can all connect to and learn to implement, this unconditional love is it.

Learn from the Rebbe to love, to bring Moshiach, as we complete on Gimmel Tammuz the 40th cycle of studying Rambam with the laws of Moshiach to make them real and practical.