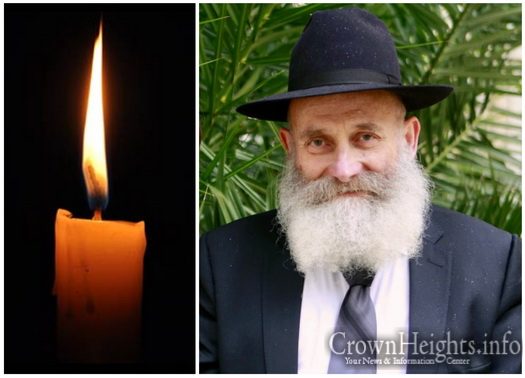 This is, after all, our Rabbi Gorelik

“He stood not far from the fresh grave and wept. I didn’t know him, but I recognized him from various events we had shared. An older person standing and crying at the funeral of a person who was not a relative of his. I went over to him, put my hand on his back and said: ‘Sad, isn’t it?” He wiped away his tears and said, ‘Atu zeh nosh Rebbe Gorelik” – This is, after all, our Rabbi Gorelik.”

And so, with such simple yet emotionally powerful words, David Trachtman described the love and deep connection that Jews from the Soviet Union felt towards their rabbi, the Rebbe’s Shaliach to the Russian Jews in Melbourne, Rabbi Chaim Elazar Gorelik z”l, who passed away this week.

Rabbi Gorelik was a beloved uncle of my wife, and I called David to tell him that I was deeply moved by his post; I also wanted to hear something more. ‘Luzik was one of our own; he spoke our language, the Russian language and the heartfelt language of the Russian Jews. He was one of us, and yet, he was different. He was above us.”

“Why?” I asked. “What was the difference?” and David answered: “Because Luzik was educated in the Lubavitcher underground of Soviet Russia. He received an education that permeated both body and soul, an education that penetrated the bones. You could not budge him from who he was and what he was.”

David does not know what I know: that one month after Luzik was born in Lvov at the end of 1946, the KGB arrested his father and sent him into exile for eight long years. And when Luzik was a month or two old, his mother was taken for long and exhausting interrogations, and he and his older brothers, my father-in-law, Rabbi Mordechai Menashe – then three years old – and their eldest brother, Shalom Ber z”l, who was then five years old, stayed home with their twelve-year-old cousin, “Vera”, whose own parents, by the way, were already in exile. If that is not called a bone-penetrating Jewish education, what is?

Those were not people that anyone could cause them to budge from their faith.

It is not easy to found, manage and maintain a center for Russian Jews in Melbourne, says David. The Jews who were searching for Judaism had immigrated to Israel, and even those who had emigrated to the United States knew that they would find there a proud and active Jewish community. Unlike these, those who came to Australia were just seeking a quiet and comfortable life, nothing more. But the Rebbe was not deterred by this, and he sent them the most suitable man – Luzik Gorelik – a small man with a big heart, who “loved us, danced with us, hugged us.”

For forty years he stood like a soldier in his watch, and was there, day after day, for his Jews. And I suddenly understand better the crying Jew at the funeral, who said “Atu zeh nosh Rebbe Gorelik” – for us, those are just five words, but someone who knows the language of the heart of a Russian Jew, knows that there is much more here than just five words.