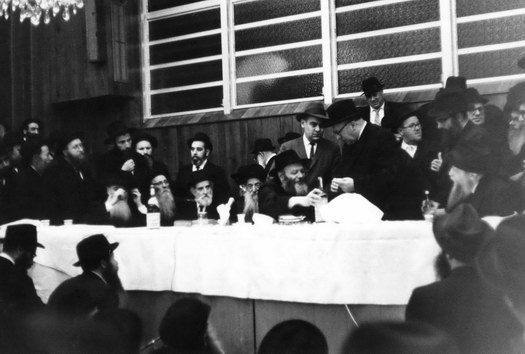 I Did Not Understand nor Remember it, But My Soul Understood

I was nine years old, and didn’t quite understand. The Rebbe spoke for many hours. I understood the Yiddish, the words themselves, but I did not understand the message, nor did I remember it. When I complained, my father said that my soul understands.

It was at the Hitva’adut of the 10th of Shvat, 5746 (1986), the first Hitva’adut that I participated in. Since then, I have gone back to its printed version it from time to time, and each time something else there touches me for the first time, as if it was intended precisely for me.

The 10th of Shvat was the day in 5710 (1950), when Rabbi Yosef Yitzchak Schneersohn, the sixth Chabad Rabbi, passed away. It is the also the day when, a year later, in 5711 (1951), the seventh Rebbe, known as the Lubavitcher Rebbe, accepted upon himself the leadership the Chabad movement. As such, this day is a very significant one for me, as Chabad chassid. To tell the truth, this is a significant day for every Jew who has ever been influenced by the Rebbe, whether directly or via his chassidim and shluchim, his words and his many writings.

But back to me: The Rebbe accepted upon himself the leadership long before I was born, and certainly influenced my life through my parents, may they live, but the first direct, internal connection with him for me was made actually on the 10th of Shvat, 5746. And so, I return to my first Hitva’adut, study it once more. I would like to share with you a few lines from it that for me are mind changing. I will not explain, I will not go into details; I will just bring them word for word (in translation, of course), as they are written down in the book:

Regarding all the calculations about the state of the world and his personal state – whether he is worthy or not worthy etc. – he should know and remember that he is not being requested to do something new that never was before, change the state of the world or change his personal state, but rather to return the world or himself to its real state as it was created by the Holy One, Blessed be He – “To gani (My garden), to ganunei (My very own garden), to the place that was the main place in the beginning.”

When a Jew sees something undesirable in the world or in himself, he should know that it is not coming from Creation itself, for the creation of the world and of man – both Jew and non-Jew – was in the form of “And G-d saw everything that He did and behold, it was very good.” – not just “good”, but “very good”. So, anything undesirable was a change in the reality of creation. Therefore, his work in fixing this thing is not doing something new, but rather returning it to its true state, as it was created by the Holy One, Blessed be He.”