« Laughing at the World, A Lesson from Rabbi Mendel Futerfas z”l
Shabbos at the Besht: The Rebbe Rashab » 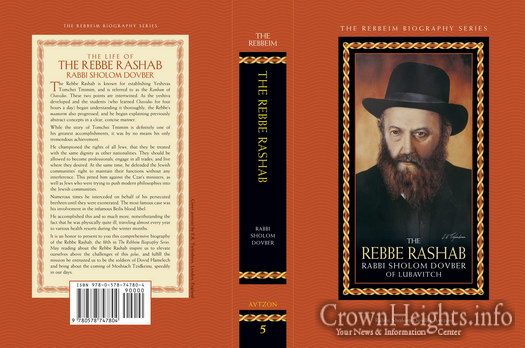 This Shabbos is Chof Marcheshvan, the 160th birthday of the Rebbe Rashab, (and therefore the kapital tehillim said for him is kapital 11). While at every yom holedes of the Rebbeim, I try to write something about them, this time, I am coming with a much deeper appreciation of the Rebbe Rashab and understanding of his life and accomplishments.

As I posted in previous posts, I have recently sent his 648-page biography to the printer, and in this weeks’ post, I would like to share some of the points that I learned.

If you ask a Lubavitcher to describe the Rebbe Rashab, the answer you will receive is that he founded Yeshivas Tomchei Tmimim, and is the Rambam of Chassidus. His community activities were concerning the ongoing war with the maskilim and their associates including the Czar’s ministers, who were determined to undermine the chinuch of Jewish children. Furthermore, he stood up for the rights of every Jew, to live with dignity and be allowed to earn a livelihood in the profession he so desired.

We also know that he was involved in the infamous Beilis blood libel, providing the defense lawyers with assistance and in fact, the leading lawyer Gruzenberg, concluded his defense by addressing Mr. Mendel Beilis and giving over the Rebbe’s message; “If the jury and judges will ignore the truth and pronounce you guilty, realize you are not the first Jew to be persecuted. Remember that our ancestors died to sanctify G-d’s holy name with the words Shema Yisroel Hashem Elokeinu Hashem Echad.

All the above is true and is truly an impressive amount of accomplishments. However, it is so incomplete, almost a distortion of his accomplishments and by limiting it to just these few impressive things, we are in fact minimizing his true greatness.

Let us now fill in the picture a little bit, topic by topic.

He established Tomchei Tmimim and then opened up numerous branches of it in Russia and even in Eretz Yisroel, which he called Toras Emes. But he established much more than just a network of Yeshivos. In Lubavitch, some years before establishing the yeshiva, he founded, Chevras Poalei Tzedek, a society for workers. He hired a melamed to teach the storekeepers basic halachos and explain to them what can be learned from the stories in Ein Yaakov (the stories mentioned in the Talmud). These storekeepers, came early to shul, to say some tehillim and learn before they davened and went to work.

Interesting to point out, one of the maskilim in Lubavitch informed the officials that the Rebbe established an illegal society and he was taken in for questioning. This was just one of the times he was threatened by the authorities to be arrested. During the conference of rabbonim in 5670 (1910), he was actually put under house arrest.

In 5662 (1902), he joined with the Slonimer Rebbe to promote such societies throughout Russia, under the umbrella name of Chevras Machazikei HaDas. Some years later in 5667 (1907), when he spent almost a year in Germany, Rabbi Breuer discussed with him to make an international society of religious Jewry. Rabbi Breuer felt that it would help the observant Jews in Germany and elsewhere to remain firm, knowing that they too are part of a powerful and large movement.

The Rebbe Rashab then helped him formulate His’agudas Hayirei’im. This ultimately evolved into what the conference in Katowitz where Agudas Yisroel was founded. However, for various reasons, the Rebbe ultimately decided not to join.

Throughout most of his life, he was not in the best of health and traveled to various health resorts in numerous countries. Although he was going for health reasons, he used the opportunity to meet with numerous rabbonim and discussed with them how to help Russian Jewry, both in the spiritual sense and the materialistic sense.

One of the places that this was more noticeable than others was In Uzbekistan (Samarkand) and Georgia. Throughout his nesius, he encouraged his cousin, Reb Shlomo Yehudah Leib Eliezrov, who was a Rov in Chevron, and visited Uzbekistan on behalf of the Sephardic Jews in Chevron, to remain there for numerous years and become the Rov in the city of Samarkand.

He also sent Reb Shmuel Levitan to Kutaisi, Georgia to open up a yeshiva there. His success was so great that over the next few years, the Rebbe sent additional rabbonim and Tmimim who opened up yeshivos in nine other towns and cities.

Yes, many chassidim have learned the hemshech (series of maamoirim) that he began saying on Rosh Hashanah 5666 (1905). Others have even learned the three-volume hemshech which he began saying on Shavuos 5672 (1912) and continued saying until he left the town of Lubavitch over three years later, due to WW1. In these hemshechim, he expounded and clarified numerous deep concepts of Chassidus.

However, just like his great-grandfather and namesake the Mitteler Rebbe, who wrote seforim geared to various levels of his chassidim’s understanding, the same is true by the Rebbe Rashab. As noted he founded a society for the simple Jews who were storekeepers, and wrote specifically for them Kuntres U’mayon.

Seeing a general lack of enthusiasm in davening, he wrote Kuntres HaTefillah and then Kuntres Ha’Avodah and for the Tmimim he wrote a handbook of what is the goal and purpose of the yeshiva, and wrote Kuntres Eitz HaChayim.

So while he personally delved into the deepest concepts of Chassidus, many of his teachings were geared towards the chossid or Jew that wasn’t so knowledgeable in these concepts.

BATTLING THE MASKILIM and the ism’s

The battle with the maskilim, began in the days of the Alter Rebbe and continuously intensified. The Rebbe Rashab personally pleaded with Baron Gunsberg, not to open a school in Lubavitch. However, he turned him down and made sure to build an impressive one in Lubavitch. Some years later, the students of that school attacked the Yeshiva and even tried twice to assassinate the Rebbe’s only son, who was the menahel of the yeshiva.

But at the same time, when the Rebbe Rashab obtained permission and assistance from the government to send matzos to the Jewish soldiers in the Russo-Japanese war of 1905, although he once again refused to assist the Rebbe, saying there is always a pesach sheini, the Rebbe decided to appoint his son, Baron David as the chairman of this undertaking. Some years later, he convinced him to save the Rom printing press, so that Russian Jewry can have one Jewish press.

One of the major battles began after the maskilim persuaded the philanthropic agency JKA to grant them a million francs to expand their schools. The Rebbe spearheaded a battle against it and ultimately succeeded to cut off this funding. However, being that over 650,000 francs were earmarked for Russian Jewry and not spent, the Rebbe convinced them to use it to open up a weaving factory, giving two thousand Jewish families a decent and honorable source of income.

He also championed the cause that a Jew if he chose should be allowed in a University, and be allowed to earn a livelihood.

I was under the impression, that just as he appointed his son, the Frierdiker Rebbe to be the actual administrator of the yeshiva, the same thing is that when he appointed him as his personal secretary and made the krisas bris (or the Akeida), he gave him the power to deal with all communal issues. This allowed him to contemplate on Chassidus to his heart’s content. While this is true to a certain sense, it gives a false narrative.

Yes, the Frierdiker Rebbe traveled and spoke on his behalf. Yes, he was authorized to make decisions and often did so. But whenever it was possible to delay the answer for even a short time, the Frierdiker Rebbe would ask, either, verbally or through a letter or telegram, for his father’s guidance. He was involved in everything.

He worked tirelessly to help the Jewish soldiers who were at the war front, and then organized assistance to help Jews settle in the big cities, after the government evicted them from their homes at the onset of WWI. He then bought a printing press and printed both Ashkenaz and Sephardic siddurim, that a siddur should be available.

Another misconception is that until he fully accepted the nesius on Rosh Hashanah 5654 (1893), eleven years after his father’s histalkus, he wasn’t involved in communal affairs. For example, only after then, did he actively participate in leading Colel Chabad. But, I found that in Tishrei of 5652 (1891), he successfully interceded on behalf of hundreds of Jewish families who were incarcerated or threatened to be expelled from their homes.

The Rebbe’s involvement in this case was way more than I imagined. Yes, he allowed the lawyer to use his vast library as a reference to refute the claims of the prosecutor. He advised the lawyer how to conclude his summation at the end of the trial. But, he did much more.

He instructed the chossid Reb Mendel Chein, to be in Kiev throughout the trial (ultimately six weeks), and assist the lawyer with his knowledge of halacha in every matter possible. Furthermore, I didn’t realize that the governments’ claim was that Mendel Beilis murdered on behest of the Rebbe. They stated that Mendel Beilis doesn’t need a gentiles blood for his matzos, but chassidim and especially tsaddikim do. So Mr. Beilis, what is your connection Rabbi Schneersohn?

However, this wasn’t the only time the Rebbe was involved with lawyers to help a Jew. In fact, the Rebbe established a fund and committed to cover fifty percent of all lawyers fees to defend any Jew that was falsely accused by the authorities.

Until he became nineteen, the Rebbe Rashab was in robust health. Although some officials desperately wanted the Rebbe Maharash’s son to officially join the army, they all agreed that Reb Zalman Aharon’s health precluded him from doing so. However, when the Rebbe Rashab became eligible for the draft, they insisted on him doing so.

Ultimately the Rebbe Maharash was able to obtain an exemption, however, the following year the Rebbe Rashab had a serious bout of tuberculosis and that affected his health for the remainder of his life. If that is what triggered his other ailments, such as a weak heart, is not clear. But that is the reason why every winter, he went to various health resorts, and in the summer he went to a country home. Numerous times throughout his life, the doctors voiced their concern that they might not be able to help him.

Additionally, he had no feeling in one arm.

I mention all this to bring out his greatness. The accomplishments noted above are only a fraction of what he did. It would take a “giant” of a man to accomplish that. How much more so is this, when you are dealing with someone who constantly had to be concerned about his health, and was away from his home every year for a few months, in the winter and summer?! But nevertheless, he threw everything to the side in order to help Russian (and world Jewry) Jewry, collectively and individually.

This weeks’ post is l’zechus the complete and immediate healing for my sister Chaya RivKa bas Cheyena and all those in need of a brocha.

Rabbi Avtzon is the author of numerous books on the Rebbeim and their chassidim and can be contacted at avtzonbooks@gmail.com

« Laughing at the World, A Lesson from Rabbi Mendel Futerfas z”l
Shabbos at the Besht: The Rebbe Rashab »