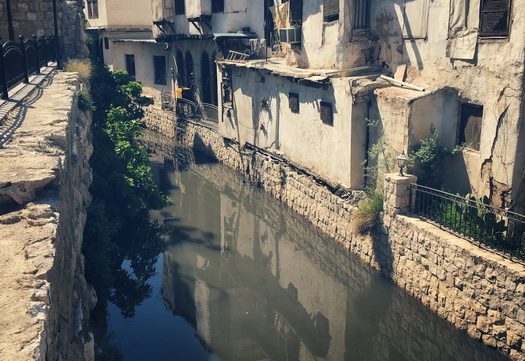 I heard this story when I was a youngster and someone recently reminded me of it. It can be seen in all its details in taamei Haminhagim pp. 497-499. At the same time, I ask you to please share with me stories that I can share with the wider audience, may they all be well. As always your feedback is greatly appreciated.

Rabbi Moshe Galanti lived in Damascus, which was then a Muslim country, and the sheik was a just person, who was loved by the people. In addition to being a fair judge, whenever someone was ill, the family would come to him and ask that he pray on their behalf. Not only did he do so, but he would tell them when to return, and when they came back he informed them if their family member or friend will survive or not.

After some time it became a regular scene. Early in the morning long lines of individuals would line up in front of his palace, to ask him for his prayers and blessings and then that evening or whenever, he instructed them to return, he would tell them what will happen.

People came to Rabbi Galanti, the Rov of that city, and asked him whether they are allowed to ask him as well. Their question was, was the sheik using the power of an avodah zora, or was it a gift from Hashem? When the Rov heard about this phenomenon, he also became curious about this ability of the sheik, and decided to find out.

He called the shamash and told him to ask the sheik if he can visit him. The sheik who was quite learned and had heard that the Jewish rabbi was extremely knowledgeable in many fields, happily agreed to meet him.

When Rabbi Golanti came, the sheik asked him if he was knowledgeable in a certain wisdom.[1] The Rov replied, with the grace of the Creator, I am somewhat knowledgeable in it. The sheik was thrilled and began discussing certain questions he had in it, and was elated with the answers. Evidently, the rabbi was modest in his declaration that he has some knowledge in it, he is definitely an authority in it.

The time allotted passed by extremely fast and the sheik requested that the rabbi please visit him the following week. Rabbi Golanti agreed, but on the third day, a servant of the sheik was knocking at Rabbi Golanti’s door. The Sheik requests that you visit him today, at your convenience.

Rabbi Golanti replied in the affirmative that he will come, and arrived some hours later.

The Rov replied, he would be happy to do so, however, he cannot promise that he will have the answers. After all, I just study it, in order to understand Jewish law, but I will try my best.

The following week when the Rov came, the sheik had a list of questions and was hoping that at least a few of them would be answered. To his surprise, the rabbi answered all of them without any difficulty.

Rabbi you said you are somewhat knowledgeable in it. I see your humility got the better of you, as you are the leading expert in this field.  The Rov simply replied, there is so much more to learn.

The sheik asked him, where did you study all this? And Rabbi Galanti replied, I need to know it to understand the Torah and the greatness of the Creator. So continued their twice a week meetings for some months. Their friendship indeed grew, and his respect for the rabbi was becoming stronger and stronger.

One day during their conversation, the Sheik asked him about the seventh subject, and when the rabbi replied that he has some knowledge in it, the sheik knew that the rabbi knew it very well, and he was thrilled. He fell on his feet and pleaded to Rabbi Golanti to please teach it to him. However, to his dismay, this time Rabbi Golanti turned him down and said, I can’t. It took me years of herculean effort and tremendous expenses to learn it, I can’t just give it away.

I will pay you whatever price you ask, replied the sheik pleadingly. What is my money worth, compared to gaining such wisdom?!

Exactly as you said, replied Rabbi Golanti, so why should I sell it for money? I can only give it away as an exchange, wisdom for wisdom. You teach me something and I will teach you something.

My dear friend, there is no wisdom that I have that you are not better qualified than I! If I have something that I can switch with you, I would gladly do so.

The sheik paled, that is something I can’t reveal to anyone, I was sworn to secrecy.

I too have that problem, but I figured in order for me to gain wisdom, it is for mine benefit, so it is permissible for me to share it, as I am doing so for my benefit not for yours.  The same is by you my dear friend, you are using it to gain knowledge.

Rabbi, I am willing to do so, however, I can’t divulge it, not because I don’t trust you, but it is because I wish to protect you.

Protect me from what, inquired the Rov.

Whoever is not worthy to know this secret and founds out, may perish on the spot, replied the Sheik, and I don’t want anything bad to happen to you.

I am not fearful of that happening, replied the Rov.

If so, I will inform you. But you must prepare yourself properly, replied the Sheik. Starting from tonight, you must fast for two days, and in the meal that you eat this evening you should not have any meat or wine. Then if you still want to see, come to me on the third day, after you immerse yourself in water and put on a new set of linen garments.

The Rov agreed and went home and didn’t break his fast even on the morning of the third day. He was somewhat nervous, but felt that he has to found out. Arriving at the palace after he davened shacharis, the guards ushered him and the Sheik greeted him warmly. He noticed that the rabbi was extremely pale and weak, and said, it is clear that you followed the instructions, so we can proceed.

The Sheik bolted the door from inside and then opened another door which led into a beautiful garden. He instructed the Rov to follow him and that there would be no talking, besides for the few instructions he gives.

The Rov agreed and after some distance, they came to a stream. He then said, Rabbi, we will immerse in the stream and then proceed.

The Rabbi was becoming more and more bewildered, but he did as was instructed.

After walking another few hundred feet the Sheik began to tremble. He whispered to the Rov, Rabbi if you want to turn back, this is your last chance. The Rov assured him that he is alright.

They then came to a small hut made out of marble and precious stones, with pure silver carved doors that put the doors of the sheiks palace to shame. Rabbi Galanti never saw a house so beautiful. The Sheik whispered, before you enter you must bow down, and before the rov could reply, the sheik bowed for a while. Seeing him bowed, the Rov was relieved.

When the Sheik arose, he respectfully knocked on the door and then with his head bowed he humbly entered the room, and bowed down seven times. Knowing that it is expected of him to do so also, Rabbi Galanti decided to say the possuk, shivisi Hashem l’negdi sumid – I place Hashem constantly in front of me, and bowed to the side.

Opposite the door was the most exquisite curtain the Rov had seen, and the Sheik instructed the Rov to move the curtain and look at what is behind the curtain. There he saw four familiar words laid out in a most beautiful way, the words he had just uttered, shivisi Hashem l’negdi sumid, and under it he saw the four letters of Hashem’s name, Yud, Hei, Vov and Hei. He sighed a sigh of relief thankful that he did not bow to an avodah zora.

They then returned in silence to his room, and Rabbi Galanti said, I saw some words and letters, but that doesn’t explain how you know who will live and who not!

The letters you saw, are the letters that spell the name of the true Creator. He created this world and is continuously in charge of it. When I hold up a name, either the name begins to shine, which means that that person is going to recover. If there is a shade over the letters that means they will pass on.[2]

When Reb Moshe came home he broke out in an inconsolable cry. He sat there with tears rolling down his cheeks. After a few moments he said, we say this possuk every day, and mention Hashem’s name numerous times a day.  So why don’t we have this present and ability, while the Sheik does?!

Because look at the respect and awe he has of Hashem’s name, even though he has no idea about Him and His Torah and mitzvos, and therefore he was granted this special ability. But we who do know Hashem, how much more respect should we demonstrate, when we daven?!!

This weeks’ post is lzechus the complete and immediate refuah for my sister Chaya Rivkah bas Cheyena and all those who are in need of a brocha.

[1][1] When I was a youngster and first heard this story, my melamed said it was mathematics and Rabbi Galanti explained that it is needed to understand the measurement of a k’zayis and rivi’is etc. The next subject was astronomy and he explained it is needed for kiddish hachodesh etc.

I didn’t include these details in the text as it is not noted in Taamei haminhagim.

[2] My melamed also added, and if it remains as is, that means the person will be ill for a lengthy time until they pass on.

He also added the following, when we asked him, how did the sheik learn this?  He replied the sheik said:  Many years ago, my grandfather wanted to find the true G-d and serve Him. He invited the priests of many religions and spoke to them, he traveled to many countries to observe them, but alas he came to the conclusion, that they are all false.

When he returned home, he constantly prayed in his room, asking G-d to help him serve Him. He cried, I spent years on searching for You, and couldn’t find You.

One night he had a dream and an angel appeared to him and said, G-d has heard your prayer. I am going to reveal Him to You. He then showed him G-d’s name. My grandfather passed the secret on to my father and my father gave it to me.

I didn’t include these details in the text as they also are not mentioned in the original story.