« A Tribute for Rabbi Aryeh Lasky
Shabbos at the Besht: An Overview of the Halachos of Sukkos » 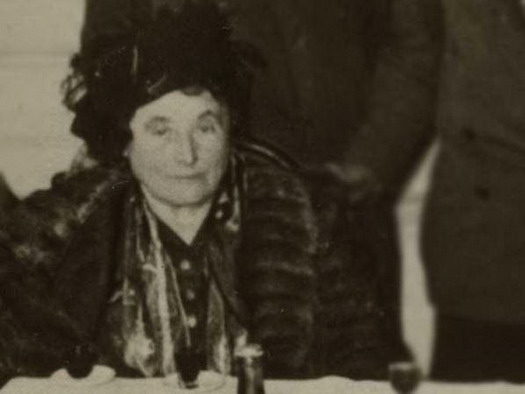 Being that Thursday was Vov Tishrei, the yahrzeit of the Rebbe’s mother, Rebbetzin Chana, I am posting some anecdotes I have heard over the years in farbrengens or from those who personally noticed it. Obviously the purpose is to learn from these stories, so while I only pointed out a lesson by the first anecdote, one should strive to learn from each one, and bring that lesson into our life.

1] The Rebbe would visit his mother at least once a day. This was at a set time in the afternoon.[1] He would walk from 770 to her apartment in 1418 President Street. There were times that he visited her in the morning as well, but then he often brought to her some basic groceries. However, the Rebbe stipulated with the storekeeper that the money he gives for the items he purchased goes and remains in the cash register, just like any other customers’.[2]

An obvious lesson we should learn from this; we all feel that the day is not long enough for us to do everything we want. However, as busy as we are, we will admit, that the Rebbe’s minutes and seconds were much more precious to him than to our time is to us, (after all, we do waste a minute or two each day). Yet the Rebbe made the time every day to visit his mother, not regulating his interaction to a phone call, but a personal visit and a cup of tea.

2] As a mother, Rebbetzin Chana was always concerned about the Rebbe’s health. She asked that no one in the apartment complex hold open the front door for him. She said, the metal door is heavy and he can use the exercise of pulling open a heavy metal door,

Other days, especially in the spring and summer, when it was nice weather outside, she would sometimes wait outside the building for him to come. She would be standing with her back towards the brick wall, in front of the yard, and the Rebbe will be standing facing her, with his back to the street. It happened, more than once, that there were people who walked pass them not realizing they were walking passed the Rebbe.

3] When the Rebbe would come into her apartment, the table was set, and there was always something to eat and drink on the table. Nevertheless, the Rebbe would prepare two cups of tea and would have a tea with his mother. He refilled the hot water urn with water, to replace the water he took out.

4] Rebbetzin Chana once mentioned to Rabbi Berel Junik,[3] that when the Rebbe leaves, he always places things back into their place. She added, the reason he does this is that this way he never walks with his back to me. But he does it in such a manner that you would think that he is actually doing it to tidy up the place.

5] Every day, before the Rebbe would come, Rebbetzin Chana would change into her Shabbos clothing to wear for the duration of the visit.

7] Although 1418 is on the same side of President Street as his house, the Rebbe would cross over President Street by Kingston and cross back by Brooklyn. People say that this was because in the building that is now known as FREE headquarters, was a colel of Yeshivas Chaim Berlin. And the Rebbe enjoyed hearing the voice of the people learning.

If you are aware of additional detail and/or anecdotes about these visits, please share it with me, so I can pass it on. Also if you have any interesting story that you would like to share, please email it to me, as the initial intent of this column was and remains to post stories that are not well known. Now that I am beginning the sixth year, I need to hear additional stories, (especially as I refrain from participating in large gatherings, so I miss Shabbos farbrengens).

To follow up on last weeks’ thought, the Rebbe asks, “If Shabbos accomplishes the same thing as shofar, why was it stopped because of a decree of Rabbah, it wasn’t necessary to blow it anyways”?

But if we look at the seder plate etc., we can understand it. The korban Pesach was roasted, so therefore we use a chicken neck and roast it, but we don’t eat it. This is called zecher l’mikdash, we do things to remind ourselves of what was done in the mikdash. Therefore, we might have thought that we should blow it, to remind us of what was done in the beis hamikdash.

In order that we don’t do blow, to remind us that it was blown in the beishamikdash, Rabbah made his decree. But since that blowing accomplished something that we can’t do on our own, we recite the pesukim that are written in the Torah, to accomplish something that is not in the ability of a person to accomplish, it is accomplished through the Creator who is greater than us.

This week’s post is l’zechus the complete and immediate refuah for my sister Chaya Rivkah bas Cheyena and all those who need a brocha.

[1] I heard from people who noticed this two different times. Some say it was sometime between four and five and others say it was closer to six. Possibly there were changes over the years

[2] I was told, Otherwise the Rebbe felt as if he is causing the storekeeper a loss.

[3] Rabbi Junik left Russia together with Rebbetzin Chana, and later on when she settled in New York, he helped out in her house.

« A Tribute for Rabbi Aryeh Lasky
Shabbos at the Besht: An Overview of the Halachos of Sukkos »