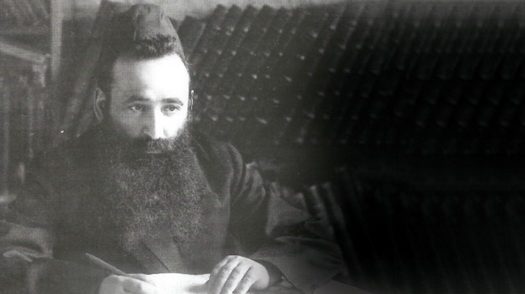 This Monday is Chai Elul, the birthday of both the Baal Shem Tov and Alter Rebbe. Therefore we begin to say kapital 23 and 126 respectively. May it truly enhance our service of Elul.

Recently someone asked me if I heard the following story which was related by Rabbi Biderman, and I replied that I hadn’t, but I will look into it. Subsequently, I heard a few versions, so I decided to post the parts that everyone agrees on, (in the footnotes I will mention some of the differences).

Your feebback is always appreciated.

Rabbi Yechezkel Abramsky was arrested in 5689 (1929) by the communists and sentenced to five years of hard labor in Siberia.[1] Boruch Hashem he was saved two years later and settled in England. Then in 5694 (1934) he served as the Av Beis Din of England for 17 years. He then moved to Eretz Yisroel, where he taught for another 25 years.

Once when he met the Frierdiker Rebbe, he discussed his years in Siberia. Among the points he mentioned, he related the following incident.

“One morning when I awoke and was saying Modeh Ani, I began to ponder. In my present situation which might cause me to pass on, what am I thanking Hashem for? I don’t have a siddur to daven from, I can daven only what I know by heart. I can’t put on tefillin as it was taken away from me. I can’t learn Torah as I have to work throughout the day and I have no seforim to learn from.  Is this the life of a Jew?

But then I came to a realization; I am connected to Hashem and Hashem loves me just for the fact that I am a Jew. So yes, I have what to be thankful and indeed joyful about.[2]”

The Frierdiker Rebbe said, “Reb Yechezkel, the entire [ordeal of] Siberia was worth it, to come to that realization.”[3]

Years later when Reb Yechezkel related this encounter to his students, he gave the following preface, “My students you should know that only a tzaddik like the previous Lubavitcher Rebbe who was imprisoned by the Communists and faced the death penalty for his activities on behalf of keeping the flame of Judaism alive, could say the following answer.”

While this is definitely true, I feel the need to clarify a possible misconception.

When a parent is blessed with a healthy child, even though the baby can’t do much activity, the parents love him/her with their entire heart. But as the child grows and develops, the parents encourage their wonderful and beloved child to begin crawling, walking, talking, dressing and performing more.

The same is with every Jew. Hashem loves each and every one even if he/she is unable to do a mitzvah (such as those who are considered tinok shenisba – a person, who grew up without being taught about Torah and mitzvos).

However, one who does know and for whatever reason decides not to observe the mitzvos, can be compared to child who loses valuables that the parents gave him/her. While the parents still love the child, they may take their child to a specialist for help or reprimand him/her because of the love that they have to their child.

The same applies to all of our fellow Jews who for whatever reason became lax in some commitment of observance. You are still beloved and part of the community, but at the same time someone may remind you that each mitzvah is compared to a tailored made garment that fits you perfectly or an exquisite piece of jewelry that enhances your being. If you have that recognition, wouldn’t you as a friend try to help your friend find their misplaced jewelry.

In essence this is part of the Alter Rebbe’s message in the parable of Melech BaSudeh – A King in the field.

The city dwellers represent those who are occupied the entire day in learning Torah and the people of the field represent those Jews who have regular jobs, but fulfill mitzvos and support the Torah scholars. Then there are those who may have wandered into the wilderness, which represent a Jew who does not fulfill Hashem’s will.

Yet the King – Hashem goes into the field and makes Himself available to all of his subjects, even to those who have wandered in the woods. Seeing that they are still beloved to the King – Hashem, they come to the realization that they are not mere wilderness people, but people of higher caliber, field and even city dwellers. Then they join the king and are welcomed into His chamber as a trusted subject.

This week’s post is l’zechus the complete and immediate healing of my sister Chaya Rivkah bas Cheyena together with all cholei Yisroel that need a brocha for their health.

Rabbi Avtzon is a veteran mechanech and the author of numerous books on the Rebbeim and their chassidim. His upcoming book on the Rebbe Rashab is 90% completed with over 600 pages already edited. He can be contacted at avtzonbooks@gmail.com If you wish to participate in it, please contact him.

[1] I heard various versions of what the charges against him were.

[3] I heard from some that when Reb Yechezkel visited the Rebbe, the Rebbe asked him to relate something that his father-in-law, the Rebbe said to him.  Initially he didn’t recall anything but as he was standing by the door, he recalled it and related it. The Rebbe said in astonishment, “And you held back such a saying from me??!!”