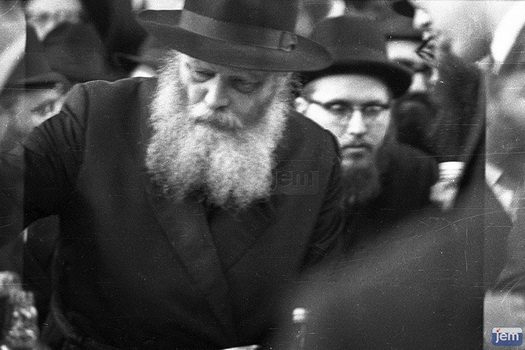 It is the custom of the Rebbe before Shavuos to bless all Jews to receive the Torah B’simcha U’b’pnimiyous. Many expressed their understanding of what the two terms mean or refer to, and I would like to offer an additional perspective based on the following story.

As always your feedback is most appreciated; (especially now that there are no comments allowed on the websites).

A student of Tomchei Tmimim lived in the same town where a chossid of the Magen Avos (Kopuster) lived. That chossid was extremely knowledgeable in Chassidus Chabad, and whenever he noticed someone from Lubavitch, he would ask about the Rebbe Rashab’s Chassidus.

Initially the student mentioned concepts that were discussed in various maamorim. But each time the Kopuster replied, that concept is discussed in the maamorim of either the Alter Rebbe, the Mitteler Rebbe or /and the Rebbe the Tzemach Tzedek. He would then show him in which maamar it was discussed. The Tomim saw that the Kopuster’s point was just to state that the Rebbe is not saying anything “new”, so he decided it is best not to get into this type of debates. He won’t be able to convince him that the Rebbe added clarification in these various concepts, as that chossid did not want to hear anything positive about Lubavitch, after all he was Kopust.

During the famous hemshech of 5666 (1906), which everyone knows revealed tremendous depth in many concepts of Chassidus, the Tomim brought home a copy of many of those maamorim, confidant that this time he will be able to show the Kopuster something he will to admit to.

Sure enough the same question was asked, and he eagerly opened his bag and said, “Here, you can see it for yourself.”

The Kopuster took the papers, put one foot on a stool and began reading it for around an hour. He then said, this is correct, but this concept is mentioned in such and such a maamar, and if you would learn that maamar properly, you would see that your Rebbe didn’t reveal anything new. I don’t see any accomplishment.

The Tomim was hurt, he knew that the Rebbe revealed new concepts, but what can he do when a person has a preconceived notion and refuses to be willing to change?

Twenty years passed, it was now after the communist regime began their onslaught against religious observance. (I don’t know if this happened before the Frierdiker Rebbe was arrested in 5687 (1927) or shortly afterwards. The Tomim was now a married person and “by chance” he met the Kopuster chossid.

The Kopuster said to him, “Now I see what the Rebbe Rashab accomplished with that maamar!”

The Tomim was happy he was vindicated and they parted in friendship.

The question is, what happened that caused the Kopuster to recognize that The Rebbe Rashab accomplished something with his maamar. Was he thinking about the maamar for twenty years and finally understood the chiddush (new concept) that the Rebbe spelled out? That is highly doubtful; he was a Kopuster and wasn’t going to review the Rebbe Rashab’s maamorim.

But he now was looking around himself. He saw how Communist Russia was decimating the observance of Yiddishkeit. He saw how great talmidei chachomim, were forced to be mechalel Shabbos etc. Those who were lucky were able to leave Russia, but otherwise most of them capitulated to the demands of the regime. Many of them stopped teaching their students, with the hope that they will be left alone and not be threatened. If we stay quiet, the government won’t bother itself about my shmiras Shabbos and all other mitzvos. Yet there were individuals that didn’t succumb to the intense pressure and prosecution. They continued to teach others and put their lives in danger.

The truth be told there were individuals from all backgrounds and communities. However, he couldn’t ignore the fact that a majority of them had one thing in common, they were Tmimim.

So it wasn’t that he now saw a new insight in the Rebbe’s maamar, but rather he recognized that the Rebbe ‘s accomplishment was that those concepts were not just grasped as an intellectual exercise, but rather that they were internalized, and became part and fiber or the Tmimim. So even if there was no chiddush, it still was an unbelievable accomplishment of the Rebbe, and now that his mindset changed, maybe he would see that the Rebbe also revealed a new dimension in those concepts.

Let us indeed merit to receive the Torah B’simcha U’b’pnimiyous.

Next week bezras Hashem I will continue with practical points as it applies especially now in the new ZOOM generation. I will be glad to also share insights that the readers may share with me.

Rabbi Avtzon is a veteran mechanech and the author of numerous books on the Rebbeim and their chassidim. He can be contacted at Avtzonbooks@gmail.com