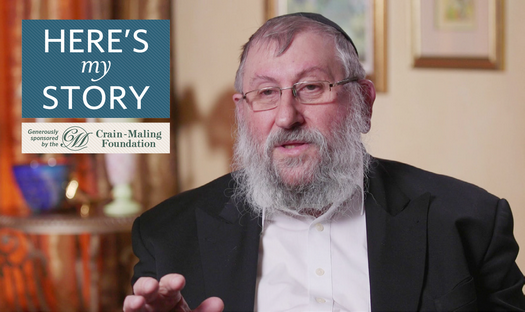 When I offered to make a substantial donation to Chabad, I received an amazing response from the Rebbe, which gave me great insight into his worldview and, literally, changed my life. All this started when, in the early 1980s, my law partner and I got involved in real estate investment in the city of Melbourne, Australia, where we live. We bought two small properties in the center of town and, after holding onto them for quite a few years, we were approached by a big Japanese company which wanted to buy them. This Japanese company was planning to build a huge store in that location and they made us an offer we could not refuse. So we made the deal and realized a substantial sum.

I discussed it with my wife, Sylvia, and we both thought it would be a good idea to do something for Chabad with this money. After due consideration, we finally decided that we would like to build a hospital for children in Crown Heights, where the Chabad headquarters is located and where a significant Chabad community lives. We wanted the hospital to be operated in accordance with Jewish law and to function under the Rebbe’s guidance.

Since we were from Melbourne and didn’t know too many people in Crown Heights, we sought out Rabbi Yehuda Krinsky, the Rebbe’s secretary. We came to New York, met with Rabbi Krinsky, presented him with the check and returned home to await the Rebbe’s response. It came shortly thereafter in the form of a three-page letter, dated the 15th of Tammuz, 5746 — that is, 22nd of July, 1986.

The Rebbe opened the letter by quoting the saying of our Sages: “The reward of a mitzvah is the mitzvah itself,” and then continued: What can a “thank you” from a human being add to the Divine reward in which everything is already included? But it is certainly in order to express my inner pleasure at seeing another well-known saying of our Sages so eloquently confirmed in concrete action, namely the saying that “a Jewish heart is always awake” — awake and responsive to Hashem’s mitzvoth, especially as in your case, response to the need to spread Torah and mitzvoth for the benefit of the many. He went on from there to address the question of how best to use the donation “in accordance with your intention.” And what followed was a long exposition of the relationship between medical science and Jewish law:

Our Sages declare, “the Torah brings refuah [healing] to the world.” The meaning of it is not that the Torah negates medical science in any way. On the contrary, the Torah declares that, in matters of health, it is necessary to consult a physician and follow his instructions — at the same time not forgetting … that the physician is no more than the agent of [G-d].

Then the Rebbe analyzed the current approaches of medical science — what he called the “therapeutic” approach and the “preventive” approach. The therapeutic approach treats illness, while the preventive approach aims to eliminate illness. He continued:

Needless to say, while there is no getting away now from the need of therapeutic medicine, preventive medicine is, ideally, the more desirable method … For preventive medicine to be most successful and effective, it is necessary to start it from the earliest childhood — beginning with vaccination, brushing one’s teeth to prevent cavities, a balanced diet, and so forth. In regard to Jewish children, it calls for strict observance of the laws of kashrus of foods and beverages, and it is well known how it affects mental and physical development.

Turning to our desire for our donation to be put towards a hospital for children operated in accordance with Jewish law, the Rebbe declared, “The Torah is the most effective preventive medicine” and then went on to express the opinion that “the best way of implementing your intention and to achieve even incomparably greater results than can be imagined, is to apply your contribution in the area of Torah chinuch [education] for children.”

He summed up various Chabad activities, which ranged from running kosher nurseries to helping the aged, and concluded:

In light of all above, it is my considered opinion that if your tzedoko is used in this way, it would be in the real spirit and letter of your idea and intention. For,used in this way, it will help ensure healthy children, physically, mentally and spiritually, so that there would be no need to establish a special hospital for children according to the halacha, since they will be raised fully in accord with the halacha.

I understood. Both your physical and spiritual needs can be satisfied by following the Torah. If you follow the Torah, it will be your healer. And, therefore, Torah education is primary and the most important way to prevent any illness.

In the end, I don’t know where the money we donated went exactly, but we left it to the Rebbe to decide where it should go. We felt that our connection to the Rebbe was very much strengthened as a result, and although we never had the privilege of meeting him in a private audience, we came almost every year to attend his farbrengens on Simchat Torah. As well, we connected with him as he was distributing dollars for charity.

I, personally, began to study chasidic teachings in a major way — that was the starting point for me — all the while keeping the Rebbe’s wise words in mind. They changed my life, as well as the lives of my wife and children, and they guide us to this day

Mr. Michael Goldhirsch resides in Melbourne, Australia, where he has worked as a lawyer for over fifty years. He was interviewed in July of 2016 and November of 2019.