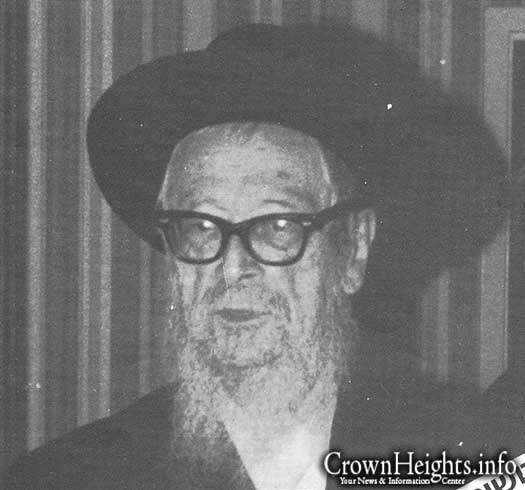 As we prepare for Yud Aleph Nissan (this Sunday and we begin saying chapter 119 in psalms), 118 years since the Rebbe’s neshoma was sent to illuminate this world, and prepare it for the coming of Moshiach Yzidkeinu, may it be speedily in our days, I am posting a story that I received a month ago. I take this opportunity to thank everyone who shares their stories (or stories they know to be true), so that all Anash and indeed the all Jews can benefit from it.

At the same time I want dedicate this article to all cholei yisroel, may Hashem send them a complete and speedy recovery. A special tefilla for Chaim Yosef Yitzchok ben Sima Leah, who for many years worked tirelessly on behalf a Tomchei Tmimim.

(To commemorate the passing on the 17 of Adar of Rabbi Zalman Shimon Dworkin a”h, the Mara d’Asra of Crown Heights – we present a beautiful story about him …)

A little over ten years ago a family in Tzfas had a new baby boy. The father of the baby decided to hold the bris by the one who had facilitated his teshuva process, a certain Chassid, Rabbi F.S. from northern Israel, to whom he would honor with sandakaus (holding the baby during the circumcision).

The night before the bris, as is customary the father and some friends celebrated the “vach nacht” and farbrenged. At this farbrengen, the following story about Rabbi F.S. was told.

It was about thirty years ago when the Rebbe said (in 1978) that the Tanya should be printed wherever Jews live. The idea was to conquer the world with the teachings of Chassidus. Chassidim began printing editions of the Tanya in every city and town in the world.

Rabbi F.S. considered how he could get involved. He came up with the idea of printing the Tanya in a pocket-sized format so it could be easily carried anywhere. This would surely add to the purification of the atmosphere of the world through the study of Tanya on trips and on the road.

Rabbi F.S. decided to dedicate this edition to the Rebbe as a gift.

He first asked the Rebbe permission to follow through on his idea and he also offered to include notations on the pages following the daily study calendar (something which was later done by Heichal Menachem). The Rebbe gave his approval to the printing but did not agree to have the notations inside the body of the work, saying it was not yet the time for this.

The main problem was preparing an edition that would fulfill opposing requirements; that it should be pocket-size while also having a large, clear print. After many attempts, he was successful. He sent the edition to the Rebbe and hoped to receive the Rebbe’s bracha of yashar ko’ach and encouragement, but he received nothing at all. This distressed him greatly [especially as it was quite common to receive such a bracha].

At this same time, Rabbi F.S. having already been committed to various penitential practices and had decided, on his own, to fast.

At first, he fasted on Mondays and Thursdays, but then his fasting extended throughout the week. He ate only at night. This went on for ninety days!

That year, Rabbi F.S. planned on traveling to the Rebbe. When he arrived at 770, he submitted a letter about his arrival and mentioned his fasting. Not even two hours went by and Rabbi Groner, one of the Rebbe’s secretaries may he have a refuah shleima, was looking for him. He had a response from the Rebbe:

The directive of the Alter Rebbe in Igeres HaTeshuva is known, that in our generations one should not fast etc., aside from the fasts we are obligated in, and especially in actuality this is the practice of Chabad Chassidim – to conduct themselves this way. Therefore, you should immediately annul the aforementioned practice (being that you have done it more than three times) with a Lubavitcher rav and do as all Chabad Chassidim do, and may Hashem grant you success to serve him with joy and as per the teaching of the Baal Shem Tov [on the verse] “assist shall you assist with him,” with the body.

Rabbi F.S. asked Rabbi Groner what he should do, and Rabbi Groner advised him to go to Rabbi Zalman Shimon Dworkin’s home, as he was the rav of Crown Heights, and annul his vow.

Rabbi F.S. went to Rabbi Dworkin straight away and told him what happened. Rabbi Dworkin examined the Rebbe’s answer and said that he thought the Rebbe did not want him to cancel his vow retroactively but only henceforth. The fasts that he did until that point should remain in force.

Rabbi Dworkin called in two other men, (to constitute a court) and in the presence of the three of them, Rabbi Dworkin asked him whether he would have fasted had he known that the Rebbe would be displeased. When the man responded no, they annulled his vow.

Rabbi Dworkin immediately got up and left the room for a moment and returned with a plate of cake and a bottle of wine. He told Rabbi F.S. to eat something and say l’chaim. They got to talking and Rabbi F.S. told him about printing the pocket-size edition of the Tanya and his tremendous disappointment about not receiving feedback from the Rebbe. Rabbi Dworkin smiled and said he had a story to tell:

A Jewish student in an American university became involved in Jewish life and became religious. This student then exerted himself for four years in medical school and did well on his tests. When he finished all that, he was told that the last thing he had to do was an autopsy. If he did that well, he would receive his degree.

The student was from a traditional home and he remembered that he was a Kohen. He knew that Kohanim cannot come in contact with the dead and he did not know what to do about this requirement. It was all that remained for him to receive his degree and it was a tremendous nisayon (test).

After making inquiries, he was told that the Lubavitcher Rebbe in Brooklyn was the one to consult. He sent the Rebbe a letter and the answer was to speak to Rabbi Dworkin. The student went to Rabbi Dworkin’s house and told him about the situation. Rabbi Dworkin said, “You cannot dissect cadavers since you are a Kohen and the Halacha forbids this. Perhaps you should study dentistry instead. That way, you can receive your degree without having to perform a dissection.”

This was a tough decision for the student since it would entail another two years of study and tests. His parents did not understand his dilemma and were upset. “Are you crazy? After so many years of study, you won’t get your degree because you are a Kohen?!”

The student eventually decided to do as Rabbi Dworkin suggested and went to dental school. His father was wealthy and paid the tuition even though he was angry.

He spent the next two years studying and passed all the tests. However, shortly before receiving his degree, his professor told him that in order to graduate he had to perform an operation on the mouth and jaw of a cadaver.

Once again, it was his career versus the Kehuna. The student wrote to the Rebbe again and the Rebbe referred him to Rabbi Dworkin. He went to the rav and told his story.

Rabbi Dworkin said, “You can’t handle the dead because the Halacha forbids it. I have an idea for you. On the day that the graduation certificates are given, go to the dean’s office and even though he is not Jewish, tell him, ‘Out of all of the mass of humanity there is one special nation, the Jewish people. Among the Jewish people, there is one special tribe, the priestly tribe. Priests are not permitted to have contact with the dead. I am a member of the Jewish people and I am also a member of this special tribe of priests. Therefore, I cannot operate on the cadaver.’

Tell him you studied medicine for six years and did very well. Your test marks show that you did well both in medical school and dental school. What you are missing is the operation on the cadaver which you cannot do. If he wishes to give you your degree without operating, fine; if not, not. Then turn around as though you are leaving.”

As difficult as this may be, the student did what Rabbi Dworkin told him. He went to the dean and repeated the script. The dean said he could not give him his degree without the operation. When the student heard this, he turned around and began walking out.

A moment later, the dean called him back and said, “Okay, I’ll approve it,” and on the spot he signed both degrees, medical and dental. The student received two distinguished degrees instead of just the one he had hoped for.

About a month later, he called Rabbi Dworkin and said he was going to get married and he wanted Rabbi Dworkin to be the officiating rabbi at his wedding, as a sign of appreciation for his help and advice.

Rabbi Dworkin only officiated at weddings in Crown Heights but since he knew this student and was impressed by his mesirus nefesh, he agreed to officiate. At the appointed time, he went to Manhattan where the wedding took place.

The driver brought him to the exclusive hotel. Everyone waited for the arrival of the rabbi for the chuppa to begin. As soon as he arrived, the final arrangements for the chuppa were made. Then a phone call came in from the Rebbe’s secretary who told the chassan that the Rebbe asked that they wait with the chuppa because he wanted to give a gift to the bride and groom. The secretary said the messenger was on his way.

Out of respect for the Rebbe, everyone waited. The messenger arrived shortly and he brought a pocket-sized Tanya which he said the groom should hold while under the chuppa.

In order to underscore the importance of this gift, the messenger related: This Tanya was always kept in a drawer in the Rebbe’s desk. This was the Rebbe’s gift to the chassan who was moser nefesh for the Kehuna.

This is the story that Rabbi Dworkin told Rabbi F.S. and he said, “What do you think, that the Rebbe sent you to me just so I could annul your vow about fasting? The Rebbe wanted me to tell you this story as I was personally witness to it so that you would know how much he valued the Tanya you published. Not only was it kept in the Rebbe’s drawer but this was the gift that the Rebbe chose to give the bride and groom. Now you can be certain that you gave the Rebbe much nachas.”

May we all have such joyful and inspiring tidings, and may we speedily merit the wedding of Hashem with the Jewish people, with the coming of Moshiach, as the wellsprings of Chassidus have indeed spread out, fulfilling the condition the Moshiach informed the Baal Shem Tov.

Rabbi Avtzon is a veteran mechanech and the author of numerous books on the Rebbeim and their chassidim. Can be contacted at avtzonbooks@gmail.com