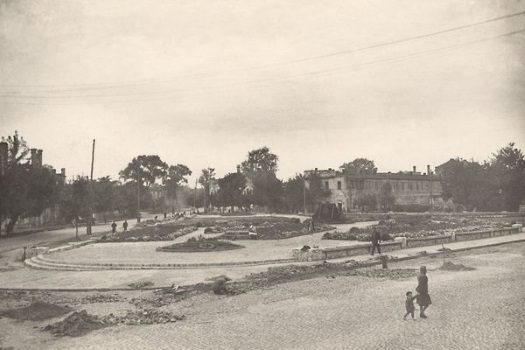 This Wednesday was the bris of my niece’s son and they named him Yonah, after her father, my brother, whose first yahrzeit was two weeks ago.

May Yonah Ben Shania grow up larichus yomim v’shonim tovos, and may he follow in the ways of his grandfather Reb Yonah a”h, giving his parents and grandparents emese chassidishe nachas.

My brother was named after our great-uncle Reb Yonah Kahan, known as Reb Yonah Poltava, whose yahrzeit is this coming week.

After our mother’s parents both passed on, Reb Yonah and his wife took in our mother and her two younger teenage sisters, until their marriage.

So in this week’s story, I will relate some details of his greatness.

Your feedback and support is greatly appreciated.

Before the Frierdiker Rebbe left Russia, he appointed some chassidim to be in charge and responsible for maintaining the yeshiva, even as it goes underground. Reb Yonah was one of them.

Some years later he managed to obtain a visa to move to Eretz Yisroel and they were all packed up. The week before he was to leave a chossid came over to him and said, he was told that the [Frierdiker] Rebbe mentioned he is happy how Yonah is taking care of the yeshiva.

Hearing this he unpacked his belongings and gave away the coveted exit papers to someone else. If the Rebbe is happy with what I am doing, how can I move and stop doing it.

One of the chassidim who was working together with him was Reb Mendel Futerfas. Reb Mendel sensed that the KGB was closing in on him and he had an opportunity to leave Russia. He and Reb Yonah together with numerous other chassidim, were involved in this daunting undertaking.

Before, doing so he went to Reb Yonah to discuss with him his personal situation. After explaining why he feels the way he does, he mentioned that he is able to leave Russia on one of the trains together with other chassidim and go to Poland.

Reb Yonah understood the situation, as the KGB was also closing in on him, and he replied; “Mendel that means that even mesiras nefesh has limitations!”

Hearing these words Reb Mendel sent his family out of Russia on the next train, but he himself remained. Indeed sometime later he was arrested and was imprisoned for many years.

I heard from Reb Yankel Chazzan, (my brothers’ brother in law) that his father Reb Aharon a”h told him the following:

One Simchas Torah night, when ewe lived in Tashkent, after the shul I davened in, completed the hakaffos, I went home and ate the seudas yom tov. After the seudah, I decided to go to the Lubavitcher shtiebel and watch or join them in their hakaffos.

I arrived as they were concluding their farbrengen, and Reb Yonah was out like a light. Evidently, he had too much mashke and he just laid down and was in a deep sleep.

It came to honor someone to say the first possuk of the Atah Horeisa, and they honored the most honored chossid there, Reb Yonah. But he was out like a light, so everyone said the first possuk together.

After a few hakofos, a Jew thought to himself, is it possible that Reb Yonah shouldn’t participate in the hakafos at all? So he went over to him and whispered into his ears, Reb Yonah, Hakafos.

Rabbi Chazzan says, he looked in amazement as Reb Yonah awoke, stood up and took a Sefer Torah. He danced with it for a few minutes and then gave the Torah to another Jew to dance with. A moment later, he laid down again and fell back asleep.

Then is when I saw the power of his neshoma. He is dead drunk, in a deep sleep. But when he heard that the minyan was in midst of hakofos, how could he not dance? At that moment all the effects of the mashke evaporated. He arose and danced as if he had not taken even one drink. I have a mitzvah to do, and it would be done. As soon as the mitzvah was completed, the effects of the mashke resumed.

In 5708 (1948), they both lived in Moscow and shortly before Reb Yonah was arrested he asked Rabbi Aharon Chazzan for a favor. He would like to use his home address in a letter he wants to send to the Frierdiker Rebbe. Reb Aharon noticed it was a pidyon nefesh and allowed him to do so. The following year, on the 22nd of Shevat, he was niftar in exile.

The porochos upstairs in 770 for many years was l’zecher nishmoso. I was told that the Rebbe is the one who dedicated it.

Correction: I was informed that Reb Michoel Teitelbaum paid for the porochos in memory of Reb Yonah Poltava.
Then some years later, someone wanted to buy a new one in memory of someone else, the Rebbe said it should not be replaced

Rabbi Avtzon is a veteran mechanech, and the author of numerous books on the Rebbeim and their chassidim. Yes, the biography of the Rebbe Rashab is progressing, and already five hundred pages have been written and is in midst of being edited. He is available to farbreng in your community and can be contacted at avtzonbooks@gmail.com