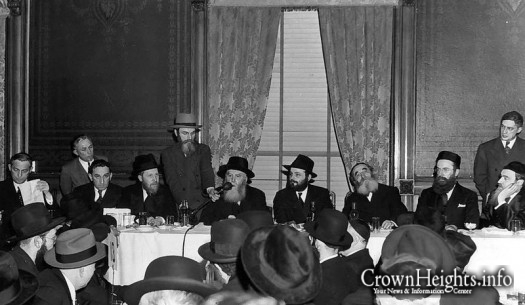 As we continue in our preparation to Yud Shevat, Shnas Hashivi’im, I would like share what I said this week in a farbrengen for mesivta bochurim. It is also a response to some of the feedback I received concerning last weeks’ story.

The year 5663 (1903), was a phenomenal year by the Rebbe Rashab in many aspects (as is discussed in his upcoming biography). He was in Vienna for three months that winter, and chassidim from Russia, Poland and elsewhere decided that they will join him for Purim. After all, Purim was one of the few times that there was an official farbrengen.

However, on Purim the Rebbe wasn’t feeling well and informed them that he cannot farbreng.

They were disappointed, but Purim is Purim and the Rebbe’s son, HaRav Yosef Yitzchok, was there, so they farbrenged with him. Shortly after the farbrengen began, a special delivery envelope was delivered to HaRav Yosef Yitzchok. Seeing that it was from the hanhalo (administration) of the yeshiva, he opened it and quickly read what they wrote.

Seeing that it was an extremely positive report on the progress of the students both in their learning, as well as in their conduct, he excused himself saying that he has to bring it to his father, the Rebbe without delay.

Watching his fathers’ reaction, he noticed the happiness shining on his face while he was reading it. When he read the last page, the Rebbe Rashab exclaimed, thank you for the besurah tova – good tidings.

Seizing the opportunity, HaRav Yosef Yitzchok said, “Father, perhaps in honor of the besurah tova, we should have a farbrengen?!”

The Rebbe Rashab responded, “Yes!” and he joined the farbrengen.

When the Frierdiker Rebbe related this incident, he said, now is not the time to mention what was discussed, but it was revelations, similar to the revelations which are reserved for Yud Tes Kislev.

So dear chassidim of the Rebbe, as this story demonstrates, our actions have consequences, and we can make sure that they are extremely positive ones.

As noted in the preface, I chose this story as a response to the question of WHO CARES? Is it so important to conduct ourselves in this electronic age etc., just as the chassidim of yesteryear did? From the above story we clearly see how vital it is that we follow the takanos of the Rebbeiim and the customs of chassidim.

But I think we should look at this concept from the a thought the Rebbe explains in the Basi L’Gani maamar of 5620 (1960), where he expounds on chapter ten of his father in law, the Frierdiker Rebbe’s maamar of Basi L’Gani. [As is known each year for twenty years he expounded on another chapter and in the year 5731, he began explaining the twenty chapters, a chapter at a time for a second time].

There the Rebbe brings down a teaching of the Baal Shem Tov.

The Baal Shem Tov says, Hashem awaits for the davening and Torah study of a Jew, in order to kiss his lips.

The Rebbe explains this is why our actions are so important. We should realize the extreme power our actions have. It causes Hashem in all His glory to be connected to our actions; and that is what gives us the ability to bring down the shechina into this physical and materialistic world, once again, just as it came down by mattan Torah.

Every mitzvah and custom that is done by each and every one of us, brings about a revelation of G-dliness

He then discusses the teaching of the Maggid on the possuk chaveirim makshivim likoilecho – friends listen to your voice, that when we learn Torah the neshomos in the highest spheres of Gan eden and/or the angels listen in and benefit from our learning. So as we, dor hashivi’i prepare for yud shevat hashivi’im, let us remember what our mission and shlichus is. The Rebbe clearly stated in his first maamar, that we, dor hashivi’I have the ability and subsequently the responsibility of bringing down the shechinah in our world.

Yes, I might have to give up something in order to accomplish that, but that is what iskaf’ya is all about, holding firm and controlling yourself. And through iskaf’ya, the essence (highest level) of Hashem is revealed in all worlds equally.

May we fulfill our sacred mission, and may Hashem fulfill His promise of bringing the complete redemption, with the coming of Moshiach, NOW!

Rabbi Avtzon is a veteran mechanech and the author of numerous books on the Rebbeim and their chassidim. He is available to farbreng on your community and can be contacted at avtzonbooks@gmail.com