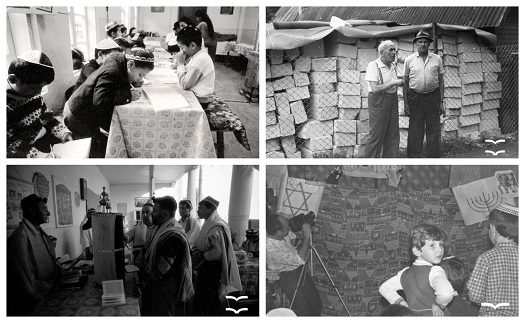 The Jewish communities of the former Soviet Union were never monolithic. For the better part of this history, most Jews did not live in Russia itself, as we know it today. In fact, the only thing connecting the different Jewish communities was the prosaic fact that they were all ruled by the Russian-speaking USSR for roughly 70 years. The communities differed in ethnic origin, language, dress and even in religious and cultural customs. Jews from the shtetls of Poland or Ukraine were different than the Jews of Bukhara, Moscow and the towns of the Caucasus. All were consumed by the USSR.

It was this vast cultural wealth that Ilya Dvorkin set out to conserve. In 1981, he took up what seemed like a crazy idea – photography expeditions to the Jewish communities of the USSR. Dvorkin himself funded the expeditions. He brought along a photographer and set out to find Jews in different towns under Soviet rule. The expeditions lasted until 1998, through the years of glasnost and the dissolution of the Soviet Union. In many cases, Ilya and his photographers were only able to find the last remnants of Jewish communities which had almost completely dispersed, only a few years earlier. Dvorkin’s photography project provides unique documentation of these disappeared communities.

Dvorkin’s documentation project reached all of these communities. Community buildings such as synagogues and batei midrash (“Houses of Learning”) that no longer exist were recorded as part of his project, as were ancient Jewish cemeteries. Customs, rituals and cultural traditions that were common among local Jews were also documented. In addition to the many photos taken, interviews with members of the different communities were recorded on video, as were local songs and unique prayers. Dvorkin and his team also documented Jewish daily life in what was then known as Leningrad (today’s St. Petersburg).

Visitors of the National Library website can explore the documentation project which includes approximately 10,000 photos, and counting.