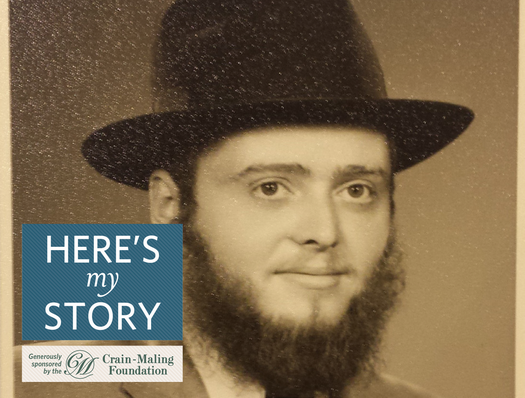 I would like to share the story of the Rebbe’s blessing that resulted in my uncle – my mother’s brother – being freed from the Soviet Union.

My mother’s entire family had perished in the Holocaust, with the exception of her older brother, Hershel (Grisha). He had joined the Jewish underground, but had been caught and sentenced to hard labor in Siberia. Ironically, this horrible sentence actually saved his life, while his wife and daughter were killed by the Nazis.

After Stalin’s death in 1953, Hershel was released from prison. He remarried and moved to Rostov, where he earned a meager livelihood as a carpenter. As soon as my mother learned of his whereabouts, she began sending him parcels of items that were hard to come by during the Soviet era.

My mother’s one fervent wish was to be reunited with her brother, the sole survivor of her family. She resolved to do all that she could to help obtain visas for him and his family to enter Canada. However, all her efforts were to no avail. The chief problem was that, at the time, emigration from Russia was severely restricted by the Soviet authorities. It was almost impossible for anyone to leave, let alone a Jew who had been previously imprisoned for “counter-revolutionary activities.” The Iron Curtain was firmly shut, and Hershel was trapped behind it.

It broke my mother’s heart that her dear brother was so far away, in a place where there was little opportunity for him to live a proper Jewish life or to educate his children to live proudly and openly as Jews.

Feeling her pain, I resolved to get a blessing from the Rebbe for my uncle’s release. During a personal audience in 1970, I mustered the courage to do something that was out of character for a chasid: I asked the Rebbe to give his assurance – in addition to a blessing – that my uncle would leave Russia. At first, the Rebbe didn’t respond to my request and spoke to me about other matters. But I persisted and asked a second time, again getting no answer.

For my mother’s sake, I posed my request for a third time. This time, the Rebbe responded. He looked at me, his eyes penetrating mine, and said: “They will leave. But you cannot disclose this to anyone.”

Without a second thought, I promised I wouldn’t.

I left the Rebbe’s office flying high – I was elated that my mother would see her brother again and her pain would be eased. And I felt compelled to share the news with her. I reasoned that although the Rebbe had requested that I not disclose this to anyone, my mother was not just “anyone.” So, as soon as I saw her, I told her. Immediately afterward, however, I felt deep regret and began to fear that my revelation would perhaps diminish the Rebbe’s assurance, as he had specifically stated that it not be shared with anyone.

About a year passed, and my uncle was still not permitted to leave Russia. So I again brought up the subject of his release to the Rebbe, but this time I simply asked for a blessing, not the assurance I had boldly sought in my earlier audience.

The Rebbe said nothing about my failure to abide by the condition he had previously imposed, and with a big smile, gave a beautiful blessing that my uncle would be allowed to leave. I then asked the Rebbe what I should do to hasten the fulfillment of this blessing.

He answered: “Az men geit, geit men tzu di hechste – When one goes for something, one must go to the top.” I took this to mean that I should go to the top official, and in Canada the top meant Prime Minister Pierre Trudeau. I immediately wrote a letter to Prime Minister Trudeau regarding my uncle’s situation. Thereafter, I received a response that the matter was being referred to the Secretary of State for External Affairs, Mr. Mitchell Sharp. My brother and I immediately began corresponding with his office, making numerous visits to Ottawa. Finally, we were told that our efforts had been successful and my uncle would be granted a visa to enter Canada.

We informed my uncle that his Canadian visa was ready and that he should apply for an exit visa in Russia. He went to the immigration office but not only was his application denied, he was threatened with being sent back to Siberia. My cousins, who were university students, were also advised to disassociate themselves from their father.

My uncle was so shaken by this turn of events that he sent a telegram to my mother, asking her not to try again. When we received this awful news, we were devastated.

And then it struck me – I was not following the Rebbe’s instructions to the letter. He had told me to go to the top; instead I had been dealing with officials on a lower level.

I immediately contacted the Prime Minister’s office again, but this time I asked for his personal intervention. In response, we were informed that Prime Minister Trudeau agreed to our request, out of hundreds he’d received, to personally ask the Soviet Premier Alexei Kosygin – who was on a trip to Canada at the time – to release my uncle and two others.

A short while later, my uncle was summoned by the authorities. He went, fearing the worst. But lo and behold, he was in for a surprise. The Communist official treated him very respectfully, even offering him coffee and cigarettes, having received a directive straight from Moscow that he was to issue an unconditional exit visa. The official told my uncle that during all his years of service with the immigration office, he had never had a decision of his overturned. He was puzzled and very intrigued. “You have connections very high up,” he concluded.

Shortly thereafter, to our great joy, my uncle arrived in Canada with his family. And of course, the first thing he wanted to do was to see the Rebbe. During that audience, he asked for the Rebbe’s blessing that his wife’s brother and family could also get out. The Rebbe said with a smile, “They’ll get out, but through ‘smaller’ miracles than you experienced.” And sure enough, they too received permission to leave and immigrate to Israel.

After they settled in Canada – where my uncle lived out the end of his days, and where his children ended up marrying observant Jews – we were invited to Ottawa to meet with the Prime Minister.

The Rebbe always said that a miracle happens through nature. In the case of a doctor curing a patient, the doctor is necessary for the miracle to take place. In this case, the “top” was necessary. Prime Minister Pierre Trudeau fulfilled that role and in so doing, played a part in the realization of the Rebbe’s blessing.