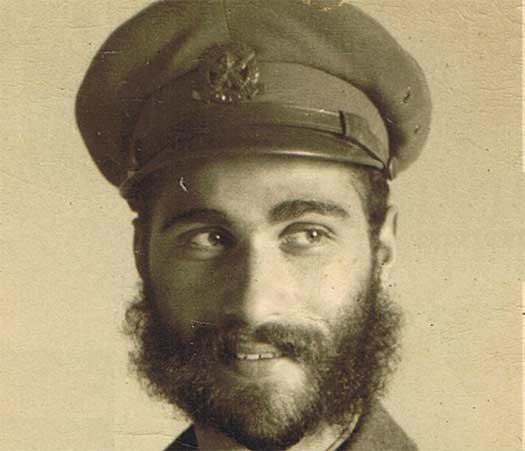 I was born in 1926 in Kursk, Russia. It was at the beginning of Soviet rule, but despite the difficulties involved, my parents made sure to give me a Jewish education.

When I was ten years old, my parents managed to get a permit to leave Russia, and we came to the Israel, then the British Mandate for Palestine. There I continued my Torah studies.

I was twenty-two years old when the State of Israel was established. I joined the Israeli army and served with the rabbinate of the IDF, eventually advancing to the position of officer in charge of religious affairs. My job description included supervising kashrut and overseeing prayers during Shabbat and holidays. On Rosh Hashanah, I blew the shofar for the soldiers, and on Passover I organized the Seder. I saw that if one had the will, one could gain much spiritual benefit from influencing soldiers within the framework of such a job. And indeed, the Rebbe encouraged me very much to take advantage of my position, and to use every means possible to strengthen the Torah observance among the soldiers.

When I completed my compulsory service, I was invited to sign up for the standing army. I debated doing so because I had gotten married in the meanwhile, and this position necessitated my staying on the base for Shabbat and holidays – not a convenient thing in my new status as family man. But I didn’t decide on my own. I wrote to the Rebbe and followed his advice to lengthen my service.

Of course, I would report to the Rebbe about all the activities I was involved in as part of my role in the army, and I would get letters back from him, in which he encouraged me very much and urged me to do more.

Before Chanukah, the Rebbe sent me coins – Chanukah gelt – to distribute to the soldiers who were participating in my classes. Before Passover, the Rebbe instructed me to make sure that every soldier would have some hand-made shmurah matzah. I raised the necessary sum and ordered several boxes of this special matzah in order to follow his instructions.

Several times a year, the rabbinate of the IDF published a journal of Jewish studies called Machanayim and, encouraged by the Rebbe, I became involved in its publication. Several times I even inserted in it sections from the Rebbe’s talks. The Rebbe showed much interest in these publications and expressed his desire to receive a copy of each issue for his library. After I completed my army service, the Rebbe wrote to me, asking that I continue to send him copies of Machanayim, and even urged me to supply specific issues that were missing from his collection.

In 1953, the first lottery was held in Israel for a trip to see the Rebbe. Sixty-three chasidim participated in this lottery, each one paying fifteen liras – not a small sum at that time – and I won the lottery and became the Israeli representative who would go to visit the Rebbe. I was thrilled about this, but because I was still in the army, it was difficult for me to receive the necessary permits to go abroad. After much effort, I managed to obtain a travel permit, and my trip was set for the Hebrew month of Iyar, 1954.

Before I left, I received several special instructions from the Rebbe. For instance, the Rebbe told me that, as the winner of the lottery, I should visit all the places where there were Chabad communities and institutions in Israel, in order to bring him personal regards from the people there. I felt that I was really representing the entire Chabad public in Israel, not only the sixty-three chasidim who had participated in the lottery.

The Rebbe also wrote that during the time I was away, there could be no lapse in my duties and responsibilities. I had to make sure that there would be no lessening of Torah observance in the army due to my absence. The impression I received was that the Rebbe would agree to my trip only if this condition was fulfilled.

Another instruction was not to travel to New York on Israeli ships, or on any ships owned by Jews or operated by Jewish workers, in order not to run into problems of traveling on Shabbat and thus benefitting from another Jew’s violation of the holy day. In the end, I went by ship from Haifa to Marseille and, from there, flew to New York.

The trip proved extremely costly, and the sum that was awarded to me for winning the raffle wasn’t enough even for the cheapest ticket. I had to borrow money in order to make up the difference, but it was well worth it.

During my visit in New York, the Rebbe treated me very warmly. In the middle of one of the gatherings that I participated in, the Rebbe declared, “Since someone from the Israeli army is here, a person who is also a religious officer, and since it is customary in the army to sing marches, he should lead us in singing a march here as well…”

At his invitation, I sang the well-known nigun called “Napoleon’s March.” The Rebbe also gave me a bottle of vodka to use in making l’chaim with army personnel.

During that visit I also had a personal audience with the Rebbe. Among other things, the Rebbe encouraged me to use my speech-giving talent and to deliver talks to the soldiers on Jewish topics. He also advised me to speak generally about discipline and acceptance of authority, which are basic principles in the army, and to explain to the soldiers that this also applies to serving G-d, for we are engaged in a spiritual war against the evil inclination (yetzer hara) in everything connected to Torah observance.

Another subject that came up concerned the letters that the Rebbe received from army personnel. During my activities in the army as an officer in charge of religious affairs, many soldiers asked me to write to the Rebbe about their personal matters, both material and spiritual. Some of them asked to write to the Rebbe following lectures I had given them on Judaism, in order to obtain deeper answers to questions that had come up. The Rebbe encouraged this and told me that I should tell them that any soldier who writes will, with G-d’s help, receive an answer to his letter, even if it may take a while.

They wrote and they received answers. Indeed, quite a few of those who wrote to the Rebbe ended up coming closer to Judaism and becoming more Torah observant. Some of them even became Chabad chasidim, closely connected to the Rebbe.

Rabbi Leib Zalmanov (1926-2017) was one of the veteran activists of the social service agency, Tzeirei Chabad, in Israel. He was interviewed in his home in Bnei Brak in August, 2009.