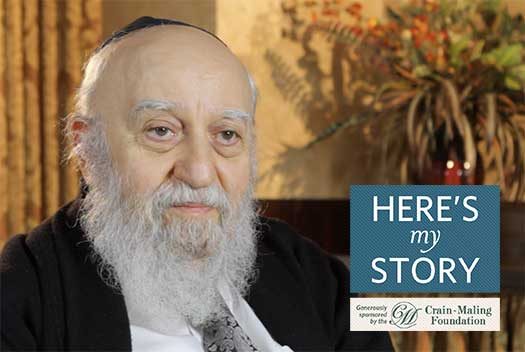 I grew up in a Chabad home – our family had been Chabad for generations – and, of course, we were very connected to the Rebbe. Nothing happened in our family that the Rebbe didn’t know about because he was like a father to us.

Shortly after the Rebbe took over the leadership of Chabad in 1951, I needed to have my tonsils taken out. Of course, the Rebbe was consulted, and he asked that we report to him right after the operation. I clearly remember my mother, who was quite a stout woman, running in the heat of the day from the doctor’s office to 770 Eastern Parkway to tell the Rebbe that all had gone well.

After receiving rabbinic ordination from the Chabad yeshivah in New York in 1960, I got engaged to be married to my first wife, Esther, of blessed memory. At that time, if a young couple had committed to go out as emissaries of the Rebbe, he would officiate at their wedding. We were planning to become the Rebbe’s emissaries, and we were hoping that he would come to recite the blessings under our chuppah.

But when we went to see the Rebbe two weeks before the event, he said to us, “There is going to be a change concerning my officiating at weddings.”

Of course, I got the hint – “change” meant he would stop doing it. Hearing this, I don’t know where I got the courage to protest, “But we are going to be the Rebbe’s emissaries!”

He responded: “Tzuden darf ich shtayn unter de shteingen tzu bentchen? – Must I stand under the poles of the chuppah to be able to bless?” In other words, the Rebbe was saying that he would bless us as a couple even without being physically present at our wedding. And that is what happened.

We arrived in Brazil in July of 1961, working for the first two years in Rio De Janeiro, and after, per the Rebbe’s directive, in San Paulo, where I became the principal of the Jewish day school.

In all this time, my wife did not get pregnant. We went to the top specialist who examined her and examined me, and he concluded that we could not have children. When we got this verdict, we decided that my wife had to go to New York to see the Rebbe. Getting the money together for the trip was no mean feat since, back then, I earned two hundred and fifty dollars a month. But we managed to put together enough money for her ticket.

When she met with the Rebbe, he read the doctor’s prognosis, but he didn’t comment on it. Instead, he told my wife, “I want you to give talks to Jewish women in these four cities – Worcester, Boston, Springfield and Providence.”

My wife followed the Rebbe’s instructions. She traveled to the four cities he named and gave talks to women there. After she returned home, she became pregnant. Thank G-d we now have four children, which I cannot help but associate with the four cities that the Rebbe asked her to visit to inspire the Jewish women there.

Working in Brazil, we always felt the power of the Rebbe’s blessings and the wisdom of his advice. For example, at the school which I directed, the parents of one of the classes were insisting that the Talmud class be conducted in Yiddish.

These kids were eight years old, and all they knew was Portuguese, the language of Brazil. Having to learn the Talmud was difficult enough, but to do it in Yiddish was just too much to ask of them. They were rebelling and I asked the Rebbe what to do. He responded, “Teach in whatever language will enable them to learn better and to learn more.”

Following his directive, I changed the system to teach the Talmud in Portuguese and, as a result, the most difficult boy of the school became the best student. He was not the only one; others were also positively influenced. In emulation of how well the Rebbe related to children, I did everything to make sure the kids saw me as their big brother. Every day I was at the gate when the school opened, and I met every one of the four hundred students with a smile.

After about ten years of concentrating on Jewish education, I also opened a Chabad House in San Paulo. The Rebbe gave me a blessing for this and, as a result of his blessing, donors came forward and we were able to build. This happened in 1973.

The Chabad House was opened to the public, which meant that non-Jews also came there from time to time. On one occasion, a couple approached me after my weekly lecture. They said that they had a daughter named Angela, who had tumors in her head and needed a blessing for recovery. I said that I would ask the Rebbe, and we dispatched a letter to New York.

After about a month, they informed me that their daughter had experienced a total spontaneous remission. I presumed this was due to the Rebbe’s blessing, but I failed to notify the Rebbe, assuming that he had many other things on his mind.

It was not until five months later that I realized my error. I was visiting New York and, when I entered the Chabad Headquarters on the tenth day of my trip, I was presented with a little piece of paper with the Rebbe’s writing on it in Hebrew: “What is going on with the little girl? How is she progressing?”

The Rebbe wanted to know what happened to the people he prayed for. He cared, yet I had neglected to inform him that his blessings and prayers had borne fruit; that she had recovered!

Of course, I gave a full report, with apologies for my neglect. When I returned to Brazil, I informed Angela’s mother that the Rebbe had asked about her. She was thrilled and said, “It is amazing to me that the Rebbe asked about my daughter on the very day of her twelfth birthday!”

There is a postscript to this story. Seven years later, I was trying to rent a space on behalf of our Jewish youth organization. When I rang the bell to the owner’s house, I was greeted by Angela, now a healthy young woman, who started to scream, “Mother, mother, look who is here!” Her parents owned that property and insisted on giving us fifty percent off the rent.

But that is not the reason that I am telling this story. Here’s why I’m telling you the story: Many people ask me, “Before the Rebbe passed away, why didn’t he tell us what is going to be with the Jewish people?”

I always answer: “If the Rebbe thought about Angela, a Brazilian non-Jewish girl, for five months, you can sure he thought about the Jewish people. So don’t worry – he is still thinking about us at every moment and taking good care of us.”

Rabbi Shabsi Alpern has been serving as a Chabad emissary in Brazil for the past fifty years. He was interviewed in November, 2010.