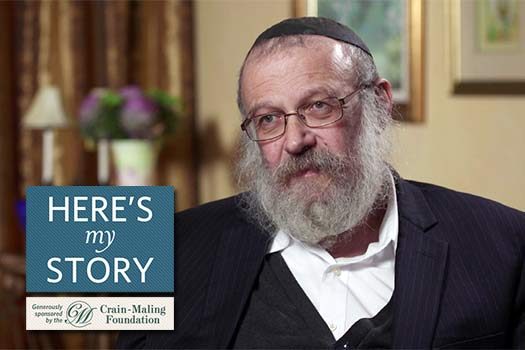 I grew up in Sydney, Australia, in a religious home. After high school, I went to Israel to study in yeshivah for a few years, returning to Australia to enroll in medical school at the University of Sydney. After graduating and completing my medical residency, I married my wife, who is from Melbourne.

Over time, I found myself attracted to Chabad philosophy, which appealed to me intellectually, and I became involved with the Lubavitch community, which was the dominant religious force in Melbourne.

Indeed, it was the Lubavitcher Rebbe who helped me decide to settle in that city. When we first married, my wife and I needed to decide whether to live in Melbourne, where she was from, or in Sydney, where I was from. We wrote to the Rebbe for his advice and received the reply: “Makom dirah kirtzon akeres habayis – your place of residence should be where the woman of the house desires.” And so we settled in Melbourne.

After a time, I was not sure which direction my life should take, so once again I wrote to the Rebbe asking for his advice, and listing four possible options which I had been considering. The first option was to return to Torah study and learn in a kollel for married men; the second was to become a general practitioner; the third was to specialize in some area of general medicine; and the fourth option was to specialize in psychiatry.

In his reply, the Rebbe circled psychiatry and added the words “kdima l’efsharut zu – this option should take precedence.” I followed the Rebbe’s advice and enrolled in psychiatric training. And I have been in psychiatric practice now for over forty years.

When I graduated, the preeminent mode of treatment was psychoanalysis. This school of thought tends to see people’s psychological problems as rooted in the traumas and experiences of the past. The therapist’s role is to facilitate an exploration of those experiences, the idea being that understanding the roots of their problems will help patients to heal. This technique involves many sessions a week for several years.

I found this method troubling since many patients become depressed upon being forced to revisit their past. Furthermore, they can become unsettled when what they perceive as “good behavior” is interpreted as a mere defense mechanism against unacceptable parts of their own personalities.

I had been studying the teachings of the Alter Rebbe, the 18th century founder of the Chabad Movement, who in his work, the Tanya, describes the duality within man (the animal soul and the divine soul). This helped me understand that good behavior is legitimate in its own right, and is not to be seen as a neurotic defense. The Tanya also demonstrates how to foster positive thinking as a genuine and legitimate aspect of reality. This had a powerful effect on me. I found chasidic metapsychology to be a multi-layered and rich source for understanding people’s functioning.

In November of 1975, I had a chance to come to New York and discuss these issues with the Rebbe personally. In particular, I wanted to ask his advice as to the advisability of undergoing psychoanalysis myself. At that time, it was a common belief that psychiatrists should do so, in order to better understand themselves and their patients.

I brought this up to the Rebbe during the audience, but he said, “Ich veis nicht vos du vest hoben defun – I don’t know what you would get out of it.”

So then I asked if perhaps I should undergo a course of psychotherapy, which is much less intensive and less time consuming. The Rebbe responded “Kenst geyen fir, finef mol – you can go four or five times.”

“Must the therapist be a Jew?” I inquired, to which the Rebbe replied, “Es macht nicht ois tzi er iz a Yid oder a goy, ober er darf zayn a baal maamin – it doesn’t matter if he is a Jew or a non-Jew, so long as he is a believer in G-d.”

When I returned to Australia after my meeting with the Rebbe, I tried to find a psychotherapist who believed in G-d, but I could not, so I never took up that option. However, the audience with the Rebbe had a huge impact on me and my professional approach and, indeed, totally changed my mindset. Among other things, the Rebbe had implied that there is a validity to short-term, goal-oriented sessions, while an ongoing, lifelong exploration is not required. This opened up the possibility for me of alternate treatment options (which today dominate psychiatry, while psychoanalysis has faded from the picture), and it led me to be become skeptical of received truths in my profession.

In addition to the above, I would like to mention a number of other interactions I have had with the Rebbe.

One time I left my car in the parking lot, with my wallet on the front seat. I was gone for only a short time, but when I came back, I found that my car had been broken in to and my wallet stolen. Of course, I was upset about losing the contents – most especially, the dollars that I had received from the Rebbe.

My brother was living in Crown Heights at the time, and I asked him if he could please go on Sunday, when the Rebbe distributed dollars to be given to charity, and ask the Rebbe for a dollar for me.

My brother went, although he was too embarrassed to ask for two dollars: one for him and one for me. But, as he was walking away, the Rebbe called him back and said, “Here’s a dollar for your brother.”

Over the years I wrote several times to the Rebbe when things were troubling me and, each time, I received personal guidance that was very important. On one occasion, I wrote regarding certain professional issues and received the answer: “Hanhoga yomis al pi Shulchan Aruch – Your daily conduct should be according to the Code of Jewish Law.” My spiritual mentor at the time, Reb Zalman Serebryanski, told me this meant that I should study the Abridged Code of Jewish Law, together with the commentary of the Misgeret Hashulchan.

On another occasion, I wrote regarding a number of areas where I felt dissatisfied with my personal achievements. The Rebbe put a circle around all my perceived failures and wrote “Lekayem bepoel mah shene’emar: Ivdu es Hashem besimcha – Actualize in practice the verse: ‘Serve G-d with joy.’”

This and other advice of the Rebbe has helped me very much, and over the years I have shared his wisdom with many of my clients and friends.

Dr. Mottel Greenbaum is a psychiatrist in private practice. He lives with his wife and family in Melbourne, Australia, where he was interviewed in July of 2016.