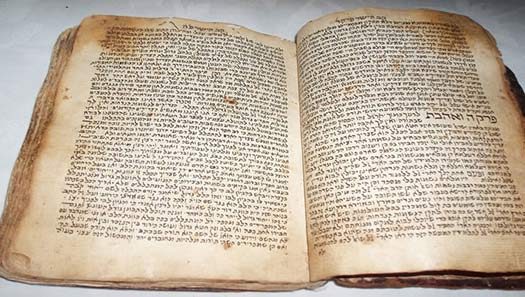 In a certain city, a group of chassidim would gather quite often to farbreng in one of the local shuls. Since one of the local townspeople, who was not a chossid, would learn in that shul every evening, they would farbreng at the other end of the shul to avoid disturbing him.

At times, when this individual would conclude his learning, he would listen in for a few minutes to what the mashpia (chassidic mentor) was saying, and then leave.

One day, after a number of months of observing their farbrengens, he approached the group and said:

“I truly admire your gatherings, and I think it is wonderful that you meet so often in true friendship. However, as you have surely noticed, I listen in from time to time to what is being said. There is one thing, however, that I don’t understand.

“In addition to the stories you relate about one of your Rebbeim and tzaddikim, I have heard you mention the same twenty or so words constantly. In fact, by now I can name a few of them myself:  kabolas ol, avodah, avodas hatefilla, hiskashrus, yesh mei’ayin, bittul, ein soif, ahavah, yirah. But how much is there to talk about these few words? During the last few months, with Hashem’s help, I was able to learn a number of chapters of Gemara in depth, while you are still discussing these same few words!”

The chassidim were at a loss, as they didn’t know how to respond. They turned toward the mashpia, as if to say, “He is asking a good question!”

The mashpia smiled and replied:

“My dear friend, you are correct. All of Chassidus discusses the same twenty or so all-encompassing phrases. So you want to know: How much can one speak about a mere twenty concepts? We have been farbrenging about these words since the days of the Baal Shem Tov, some two hundred years ago, and we will continue doing so until Moshiach takes us out of this golus. So you want to know how this is possible?

“Now, let me ask you a similar question: How many letters are there in the aleph-beis? There are only twenty-two. Now look at all the seforim on the bookshelves. Each sefer is there to explain these very same twenty-two letters. And the seforim in this room are just a fraction of what there is to learn from the Torah.

“So how much is there to discuss about these few concepts, you ask? It never ends!

I heard this from my father Reb Meir a”h and bezras Hashem it would be included in the upcoming book Sippurei Meir – Stories of a Chossid. I decided to post it this week as this Shabbos is Shabbos Mevorchim and one of the takkanos of the Rebbe is to farbreng  om Shabbos Mevorchim.