« “Take out your Wallet, Take out a Dollar and Give CSSY the Rest”
Photos: Purim on the Streets of Crown Heights #1 » 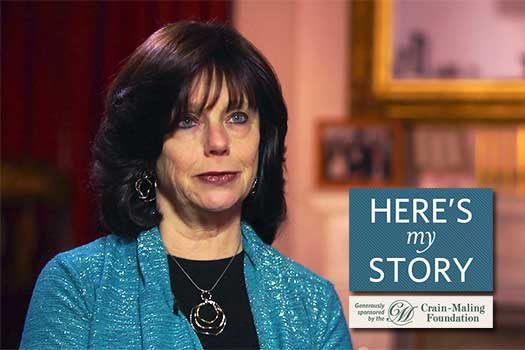 Mrs. Gila Lilian lives in Johannesburg, South Africa, where she works as a secretary. She was interviewed in August of 2014.

Rabbi Mendel and Mashi Lipskar, the Chabad emissaries whom the Rebbe sent to South Africa in 1972, were instrumental in my becoming Torah observant. After a time, they suggested that I would benefit from learning at Machon Chana in Crown Heights. I took their advice, and it proved to be an amazing experience that lasted two years. The highlight was developing a sense of closeness to the Rebbe. Though I never had a chance to meet him in a personal audience, I attended all his farbrengens (public addresses) and wrote to him often.

In the midst of my studies I returned to South Africa to visit my family. As I was making travel plans to go back to Crown Heights, my brother urged me to make the trip via Israel. He had spent time in Kfar Chabad there and felt that it may be a good place for me to find my marriage match. I was not convinced, so I wrote to the Rebbe to ask his advice. In my letter I said that I didn’t want to go to Israel and would only go if I knew that I would meet my beshert ,true partner, there. In response, the Rebbe underlined the word beshert and wrote next to it “nachon,” meaning “correct.”

So I went to Kfar Chabad, and that’s where I met my husband, a yeshivah student from Australia. We were married in South Africa in December of 1977, after which we returned for a time to Kfar Chabad, as the Rebbe had given my husband a blessing to continue his Torah study in a kollel for married men.

Fast forward to my third pregnancy, as this is the story that I would like to relate here.

I was approximately six months pregnant with my son Danny when, after a routine exam, the doctor said to me: “I’m sorry to tell you, but there is something wrong with your baby’s heart. I would like you to see a cardiac pediatrician as soon as possible so that he can do a proper ultrasound scan and give us more information.”

I did this right away. The cardiac pediatrician said that the baby had a very serious condition called “Fallot’s Tetralogy,” which includes four significant heart defects, one of them being a large hole in the heart. I was naturally extremely upset, and the doctor’s announcement that this was the first time he had seen this condition in utero and he would show my scan to all his medical students did nothing to reassure me.

I phoned my family doctor, Dr. Rodney Unterslak, who suggested that I immediately write to the Rebbe, which I did.

The Rebbe responded with a blessing that the pregnancy should go well and that I should have a healthy baby. He also recommended that I strengthen my trust in G-d.

Meanwhile, the doctors were preparing me for the worst. I was told that the baby could possibly be born brain damaged, that he would be blue due to lack of oxygen and that he would most likely be unable to lead a normal life. Not to mention that he would require major surgery at the outset. I was also told: “When you go into the hospital to have your baby, don’t bring any baby clothes, because there is a strong chance that your baby won’t survive.”

All this was very hard to hear. I was scanned and rescanned and, as there was no change, I felt very helpless. There was nothing I could do except to follow the Rebbe’s advice and strengthen my trust in G-d. I put much effort into that and it gave me a great sense of peace – I began to feel that G-d was with me and that I could count on the Rebbe’s blessing.

On September 30, 1984, I gave birth to my son with all the specialists on standby. The doctor who delivered my son told my husband that the whole birth was a miracle. Aside from the baby’s heart condition, the umbilical cord was tightly wound around his neck and there was also a problem with the blood vessels leading from the cord to the placenta – only two of the vessels were working instead of three. But despite all this he was alive. He was immediately taken away from me and placed in an incubator. The doctors checked his heart and said that he had a murmur, but otherwise seemed okay. Still, they cautioned me that it was too early to be hopeful.

Shortly thereafter, I was allowed to take my son home with orders to bring him to the cardiac pediatrician for a proper check-up. This I did after six weeks, as instructed. When this doctor examined the baby, he said to me: “Mrs. Lilian, you are making an absolute fool out of me. I have pictures, I have videos. I have it on record that your baby had Fallot’s Tetralogy, but all I can see now is a lot of scar tissue on the heart where the hole used to be!”

The hole had healed all by itself, the shape of the heart was now normal and all the other major defects had also corrected themselves.

“The only thing I can say,” the doctor concluded, “is that there has been a spontaneous correction. I have no other way to explain it.”

So I told the doctor about the Rebbe and his blessing. “This is the way I explain it,” I said, and the doctor accepted that this is what happened.

There are no words to describe our joy at the doctor’s findings. We immediately called the Rebbe’s office to inform him. And we named our son Daniel Nissim – the second name meaning “miracles” – as a testament to his wondrous recovery. He grew up as a healthy, strong and energetic child, who also excelled in sports at school.

What else can I say? I will be eternally grateful to G-d for this miracle, and of course to the Rebbe as well.

« “Take out your Wallet, Take out a Dollar and Give CSSY the Rest”
Photos: Purim on the Streets of Crown Heights #1 »