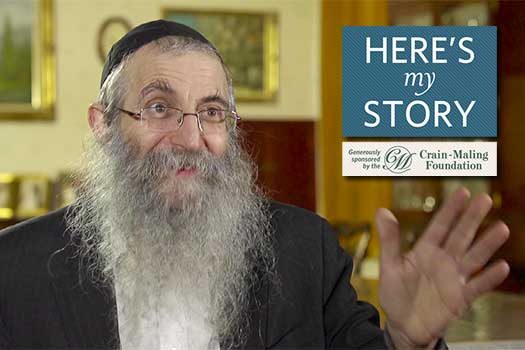 Dovber Klein, a teacher at the Chinuch N’Orim Talmud Torah and Chabad youth leader, has just published a book, Sea Traveler, on Chassidic meditation during prayer. He was interviewed in Manchester in March of 2015.

As a college student enrolled at the University of London, I majored in social anthropology. My studies played a major part in sparking my interest to travel to some remote parts of the world – Thailand, Singapore, Malaysia, Sumatra, Java and Bali – and become acquainted with their cultures and religions. Slowly I came around to thinking that there must be some kind of universal truth that I should be seeking, and Judaism should not be ruled out. This was repeatedly brought home to me when the natives in those distant places asked me about my religion and I wouldn’t know how to answer.

In 1971, after returning from Indonesia, I confided my dilemma to a good friend of mine from Manchester who suggested that if I wanted to explore Judaism, then Chabad-Lubavitch would be a good place to start. “They are more cheerful than the rest,” he quipped.

I followed his advice and ended up enrolling in a Chabad yeshivah in Kfar Chabad, Israel. There I found many spiritual seekers like me, all interested in learning about the Jewish mystical tradition.

After a year of very enriching and inspiring studies, I still had a few concerns. One was that, being an independent person, I was worried that becoming a Chabad chasid meant abandoning my individuality. It seemed as if Chabad-Lubavitch people were very dependent on the Rebbe, and I was not sure that I could easily submit to the Rebbe’s directives.

The only way to resolve my doubts was to go and meet the Rebbe, which I did at Passover time in 1974. The procedure in those days was – in advance of the audience, to write a letter to the Rebbe outlining one’s concerns and requests, and hand it in to the Rebbe’s office. So this I did – I wrote a letter five or six pages long, explaining my background and listing my questions.

I recall walking into the Rebbe’s office – which seemed huge to me at the time – and seeing the Rebbe seated at his desk. Although I walked in feeling quite nervous, I immediately relaxed because the Rebbe had a warm fatherly air about him, and yet, at the same time, I felt that I was in the presence of somebody very great.

He immediately took out my long letter and began answering my questions.

One of these was how much sleep I should get per night. It might seem like a trivial question but it was important to me because I wanted precise advice how to allocate my time.

The Rebbe’s answer was clear: “How much sleep one actually needs has to do with one’s individual constitution. Most people need between six and eight hours of sleep. Very few people can deal with less than six hours.  You can ask your doctor about this but you might need eight hours of sleep a night.”

And then the Rebbe started to do a little calculation, “Even if you need eight hours of sleep and then you need an hour-and-a-half each day for your meal times, and another hour-and-a-half for devorim beteilim [other things you must take care of], you still have plenty of time left over to become a Torah genius!” He wanted me to take care of myself while making sure not to waste time.

Another question I had asked was connected with my experiences in Southeast Asia, where I had met many people who practiced black magic. And I was a bit concerned that maybe along the way somebody had cast a spell on me. So I wanted to know if I should be worried about this.

But the Rebbe allayed my fears totally: “Neither black magic nor white magic can have a permanent effect upon anybody,” he said. “But it’s important for you to learn the Shulchan Aruch, the Code of Jewish Law.”

Although the Rebbe never explicitly made the connection, I understood this to mean that someone who led a life in accordance with Jewish law had a great deal of spiritual strength to counter all the negative forces out there.

Finally, we discussed my future. I already had a college degree but I wanted to get a teaching diploma as well. My question was: “How much longer should I stay in yeshivah?”

The Rebbe smiled at me, “Finish off this year in yeshivah and go on to get your teaching qualifications.” And then he made this very interesting comment, “You should know that if you go to teach in a school which is not very religious, even if it’s a Jewish school, people in the community might not know how religious you are and, therefore, you might not be able to find the kind of marriage match that you are looking for. Whereas if you work in an Orthodox school, people are more likely to think that you have higher religious standards.”

Now, it had been in my mind to teach in a non-religious school in order to bring those children closer to G-d and Torah. But here the Rebbe was telling me that this might not necessarily be the best way for me to proceed.

As it turned out, after I got my teaching credentials, I was offered a job in the most religious school in Manchester. I accepted it conditional on being able to give two-weeks’ notice if I found the job that I really wanted, in a non-religious school. In fact, I have spent nearly all my life teaching at that school – for forty years now.

While there, one of the other teachers told me that his father, Rabbi Chaim Silbiger, a senior lecturer at the Manchester Yeshivah, wanted to meet me and, sure enough, he was the one who introduced me to my future wife! So, just as the Rebbe predicted, my marriage match came through the religious school in which I was teaching.

When I came out of the Rebbe’s office after that first audience, I was very relieved. First of all, I realized that my concerns about being put into a Chassidic mold of dependence on the Rebbe were unfounded. Indeed, it was now quite clear to me that the Rebbe had no intention of tampering with my – or anyone’s – individuality. He respected me as an entire person and accepted that my past and my interests are part of who I am. He had a way of giving guidance without being imposing.

But most intriguing were the very first words the Rebbe uttered during my audience, which seemingly had nothing to do with any of my questions: “The job of a Jew is to strengthen his people.”

These words have stayed with me my whole life. They were the Rebbe’s personal directive to me about how to conduct my life as a chasid, but I do believe that in those few words the Rebbe encapsulated what being Jewish is all about.

While studying Torah, keeping kosher and keeping Shabbat are all very important, the Rebbe omitted them from his definition.

The key to being Jewish, as the Rebbe saw it, is more than just being concerned about one’s own personal growth and mitzvah observance. It is, first and foremost, being occupied with the physical and spiritual welfare of our people, the Nation of Israel.