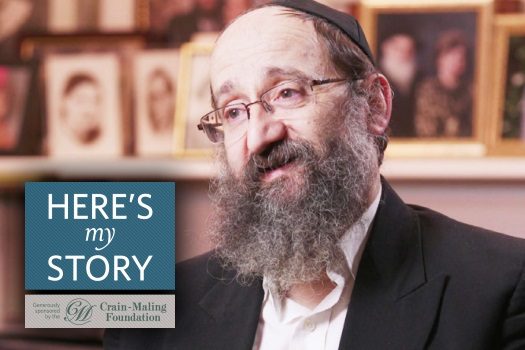 Since 1986, Rabbi Mendel Raskin has served as the spiritual leader of Chabad of Bentleigh, Australia. He was interviewed by JEM’s My Encounter with the Rebbe project in June of 2016.

I met the Rebbe for the first time in 1969, when I was fourteen years old. Back then, I was living and learning in London, in a small Lubavitch school, but I wanted to learn in a real yeshivah, and so I asked the Rebbe if I could do that. The Rebbe approved and I went to the Lubavitch yeshivahin Brunoy, near Paris. Eventually, I transferred to the main Chabad-Lubavitch yeshivah in Crown Heights, New York, where I lived and learned for close to ten years.

In 1980, Rabbi Yitzchok Dovid Groner, who was the Chabad emissary in Australia, approached me about joining other young married men in staffing his kollelpost-graduate learning group in Melbourne.

I wasn’t very keen on the idea but, since he had come to me, I felt that it was worth considering. I had also received two other proposals so I decided to write to the Rebbe and request his advice. In my letter, I listed all three of my options with the invitation to Australia last, and I asked the Rebbe which option I should choose.

Two weeks passed, but I received no reply. Meanwhile, Rabbi Groner was anxious to know whether I was coming or not. “What do you want from me?” I responded, “I wrote to the Rebbe but I got no reply!”

Rabbi Groner apparently followed up with the Rebbe, who replied that the interested parties should ask again. I wrote again and, on that same day, we received the Rebbe’s answer. He had crossed out the other two potential destinations I had put forth, and underlined “Australia” as the place where I should go.

Neither my wife nor I knew anyone in Australia. She was from France; I was from England. As far as we were concerned, Australia was the other end of the earth. My wife was worried about the move there, and when we came to see the Rebbe for a blessing, she expressed her concerns. She said that she was happy to be the Rebbe’s emissary wherever, but that she was nervous about being alone out there.

There was one more thing that the Rebbe said during that audience which proved very significant to us. He reminded us that we had both come from Russian families and we would be meeting many Jews from Russia in Australia; it was our job to show them how a Chasidic home is run and to be role models for them. Because we shared their background, they would hear us and be inspired by us.

And that is what has happened. In all our interactions with the Jews of Australia over the years, it is the Jews from Russia who feel particularly at home when they come to our house.

In 1986, after we had been in Australia for six years, the Rebbe started a campaign to increase Chabad activity worldwide. He issued a directive to expand programs for children and the elderly, and to open centers of Torah and prayer wherever there is a Jewish community. The Rebbe spoke of this at the end of Chanukah and he wanted a report, along with photos, by the tenth of Tevet. That meant we basically had a week in which to get this done!

At that time, Chabad of Melbourne had a yeshivah, which included a synagogue, but there was no Chabad center in outlying areas. Upon hearing what the Rebbe said, I told my colleagues, “Look, a few minutes away, in Bentleigh, there’s a large Jewish neighborhood without any Jewish services.” And they decided to join me and start a Chabad House there.

But we didn’t know what to do or how to start. Should we buy a house or a storefront? But we felt compelled not to let the Rebbe down, so we went big and we bought a two-bedroom home, though we had no time to plan precisely how it would be run.

We hurried, and before the appointed day, the tenth of Tevet, we were able to report to the Rebbe about the purchase and sent him a picture of the building that we bought.

The Rebbe responded with a check for one-hundred dollars and a blessing for further success. As per the Rebbe’s instruction, a book titled “Let There Be Light” was printed and I am proud to say that it includes the picture of our newly purchased building.

Ours was the first Chabad House to open in an Australian community that hadn’t had any Jewish services. When we bought the building, we thought we were going big, but very quickly it grew so popular that we had to move into another, bigger place. And then the idea mushroomed from there – the establishment of our Chabad House opened the door for many other Chabad houses and activities.

In response to the Rebbe’s appeal we went from nothing to the dozens of Chabad Houses that have sprouted throughout Australia over the past thirty years.