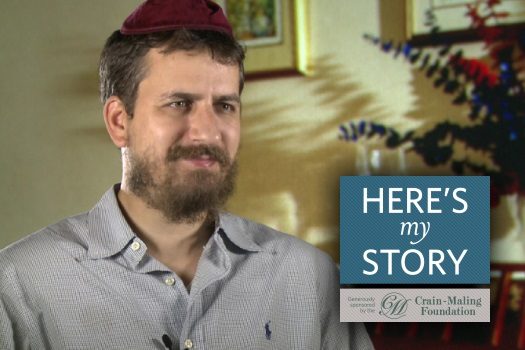 Mr. Danny Finkelman is a director and filmmaker who founded the film production house Sparks Next. He was interviewed by JEM’s My Encounter with the Rebbe project in New York in May of 2013.

Click here for a PDF verison of this edition of Here’s My Story, or visit the My Encounter Blog.

As a kid, I used to love reading books. In fact, I opened my own home library at the age of seven. And that’s when it started. One morning, I just got up and I could not open my eyes. In a panic, I ran to the bathroom to try to put some water on my eyes, but that didn’t help. My eyelids were glued shut.

My father – who himself was a doctor at the Hadassah Medical Center in Jerusalem – took me to the emergency room and, after a series of tests, they discovered that I was suffering from a very rare eye disease – in a nutshell, I was allergic to the sun.

From then on, for several years, when I woke up every morning, my eyes were glued shut. I would have to apply various creams and solutions to open them again. This took a long time. I had to get up at about 6:00 in order to open my eyes by 7:30, when I would have to get ready for school. I had to do this morning after morning.

My father sent me to every eye specialist he knew. But nothing any one of them tried helped. My sun allergy meant that any exposure to the sun would cause my eyes to swell up, and I would feel a sharp pain like someone jabbing me with needles. Besides that, my eyes were always itching and tearing.

I had to wear special sunglasses prescribed especially for me and, wherever I went, curtains had to be drawn the entire time I was in the room. At school, I was subject to mockery for a long time, though after a while the kids got used to me and my unusual appearance.

But my condition deteriorated, until I finally was informed that I would probably go blind. My father had taken me to another specialist in eye medicine in Jerusalem, Professor David Ben Ezra, who told him, “The good news is that there is a new treatment I am going to try, but the bad news is that, if it doesn’t work, your son will most likely lose his eyesight.”

Meanwhile, my father was offered a job in the United States and, in May of 1989, we immigrated to the United States. Upon arrival, we spent the first month at the home of my father’s good friend, Meir Rhodes, who resided in Crown Heights at the time.

I remember Meir telling my father, “Your son has to go see the Rebbe on Sunday morning.” That’s when the Rebbe would greet people and hand out dollars for charity.

My father was reluctant. He had taken me to many rabbis in Israel, and their blessings had not helped. So, he didn’t want to get my hopes up again only to have them dashed. But Meir insisted that we had nothing to lose.

The Shabbos before that Sunday, Meir took us to the Rebbe’s farbrengen. And I distinctly remember the awe that I felt and the electricity in the air. I could see well inside the room because there was no sunlight – fluorescent light was easier on my eyes.

During the farbrengen someone gave me a little cup of wine or grape juice and told me to say L’chaim to the Rebbe. I raised the little cup and said “L’chaim, Rebbe! L’chaim, Rebbe! L’chaim,Rebbe!” But the Rebbe didn’t notice me. I remember thinking in my childish mind, “What kind of Rebbe is this that he ignores a small boy?” And right then the Rebbe turned to me, looked right into my eyes, and with a big smile said “L’chaim!”

What I felt at that moment is impossible to describe.

The next morning, I stood in line for a very long time on Eastern Parkway, as Meir had instructed me to do, waiting to receive a dollar from the Rebbe along with his blessing. When I finally reached the Rebbe, I spoke to him in Russian, a language I knew from my parents. At that time, I didn’t yet speak English, and I didn’t know if the Rebbe spoke Hebrew. But I knew that the Rebbe came from Russia.

I asked for a blessing that my eyes shouldn’t hurt, that I grow up to be a Torah scholar, and to be healthy and successful. “Amen,” the Rebbe responded and then blessed me: “May G-d grant you success in everything you need. And you should become a chasid, a G-d-fearing Jew, and a scholar. Blessing and success.”

I walked away happy but with no expectations. And nothing much happened for a week – I still had trouble opening my eyes, I still had to apply creams and solutions to unglue them every morning, and I still felt terrible pain when exposed to the sun.

But then, the following Sunday morning, I got up and, for the first time in years, I opened my eyes right away. I was shocked. I ran to the bathroom and looked in the mirror. My eyes had opened and I was not blind. I remember feeling a cleanliness, as if I had taken a long shower. And then I went outside, and I took off my sunglasses and looked at the sun. I felt no pain! I was cured!

The only explanation for this sudden reversal of my condition was the Rebbe’s blessing.

It is an incredible story, but there is more to it. The Rebbe didn’t just open my physical eyes, he opened my spiritual eyes. I was exposed to the beauty of Chabad teachings and, at age twenty-three, I became a Lubavitcher chasid.

So, all of the Rebbe’s blessings were fulfilled – I got my health back, I grew up to learn Torah and to be a good chasid, and I succeeded in life as a filmmaker spreading the message of Judaism.