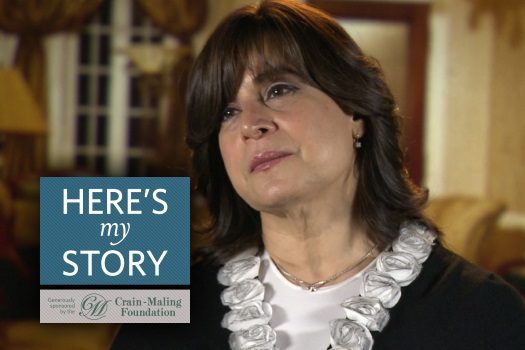 For the past fifteen years, Mrs. Sarah Karmely has served as the director of Sha’arei Tovah Talmud Torah. She is co-editor of Shalom Magazine, a bi-lingual outreach publication, and the author of Words to Hear with Your Heart. She was interviewed by JEM’s My Encounter with the Rebbe project in June of 2012.

I was born in India to a Persian family. But when I was two, we moved to England, where I was educated and lived until age eighteen – that’s when I got married and moved to Italy. And it was there that I was introduced to Chabad.

My connection with the Rebbe begins in 1977, when my husband, Benyamin, took ill.

He had been travelling to the Far East on business and, when he returned to Milan, I noticed that he wasn’t well. At first, he insisted that nothing was wrong until one morning he woke up paralyzed from head to toe. I took him to the hospital where they kept him for a whole month, and he still couldn’t move – he couldn’t even chew. He could only swallow soup, which I would have to bring to him daily.

The doctors didn’t know what was wrong, and they kept doing tests and telling me, “Signora, until we find out what’s wrong, we cannot help him.”

I was beside myself with worry, and I confided in Rabbi Moshe Lazar, who was the Rebbe’s emissary in Milan. He asked very gently, “Would you like a blessing for Benyamin from the Lubavitcher Rebbe?”

I’m ashamed to say now that I thought then, “How can a man in New York help my husband here in Milan?” But I figured what harm can it do? So, I gave his Hebrew name “Benyamin ben Esther.” I certainly didn’t expect anything to happen.

The next day, I walked into the hospital with my pot of soup and almost dropped the whole thing on the floor, because there was my husband walking towards me – no longer paralyzed, not in need of crutches, just walking normally!

“What happened?” I asked.

“I don’t know,” he answered. “It was as if my body was frozen and then it defrosted. I feel fine.”

This incident left me wondering, “Who is this man? Who is this Rebbe? What did he do to cure my husband?” I wanted to know more about him, but I didn’t find out until we moved to the United States in 1979. This may sound melodramatic, but it’s true: When I finally met the Rebbe, I felt like a new life opened for me.

The very next day after we landed in New York, I went to see the Rebbe as he came out for prayers and from that moment my attachment to him began. Whenever I had any questions about anything – my husband, my kids, my Persian community in Queens – I would ask him. Every afternoon I would drive to Crown Heights, and I would stand in the lobby as the Rebbe walked out after afternoon prayers in order to glimpse his face and be inspired.

Then, in 1980, my life took a major turn. A Sephardi rabbi in my community, Rabbi Eliyahu ben Chaim, asked me to teach new brides about the laws of family purity, Taharat Hamishpacha. I took this assignment very seriously because it’s not something one can take lightly. I took two teachers’ training courses in Crown Heights, and I felt equipped to do it.

But after six months, I got scared. It was a big responsibility, and I feared that if I got something wrong, the mistakes these women might make would be on my shoulders. So, I went to the Rebbe and told him this. He answered me, “Not only can you do this, you must do this. And I want to be partners with you.” Then he gave me fifteen dollars for the class. When he did that, I did not know how many brides would be participating; it turned out to be fourteen brides in the group, plus myself – altogether fifteen!

But what really proved life-changing was the audience I had with the Rebbe on the occasion of my son’s Bar Mitzvah.

In that audience, the Rebbe said to my husband, my son and me: “I want you to go and bring people back to G-d. If you do this, you’ll be doing G-d’s work, and He will help you, and He will give you more riches than you dream possible. Do you understand?”

Anybody who has ever been on the receiving end of the Rebbe’s piercing blue eyes will know why we just started stammering. So he repeated what he had said, ending with: “I hope you heard my words with your heart.”

That’s the title of two of my books – Words to Hear with Your Heart and Stories to Hear with Your Heart – because those words stayed with me. To this day I feel very strongly that they are applicable not just to me, but to every Jew – we all must help people around us. And when we do, G-d becomes our partner. I really believe that and I feel that.

Later on, I decided to do something to further the Jewish education of Persian children, most of whom went to public school and receiving no religious training. This idea came to me because the Rebbe kept urging me to do more for my fellow Jews. Whenever I reported on any of my activities, his response was always “Thank you, and now go and do more.”

So, with the Rebbe’s encouragement, I started a Sunday Talmud Torah for Persian children. It was not easy in the beginning because I was doing it alone. Indeed, much of the time it was a struggle, but I succeeded. At one point, there was a group of people who wanted to stop me – they didn’t want their kids to be religious. They didn’t like the ideas the kids were picking up in the Talmud Torah, coming home and refusing to eat at McDonalds or refusing to get into a car on Shabbat.

Finally, I couldn’t take all that opposition, and I went to the Rebbe. I said, “I just can’t do it anymore.” In response, the Rebbe waved his hand and said, “Gornisht! It’s nothing! It will go away.”

He was right. From that day forward, everything calmed down, and I was able to continue my classes with good results.

Over the years, the Rebbe gave me so many blessings. I always came to him when I needed advice; I could tell him things I could not tell anyone else. He guided me, protected me and helped me.

I never knew any other person like the Rebbe who cared for me as a father would care for a child. That’s how I related to him – as a father figure in my life. And I miss him very much.