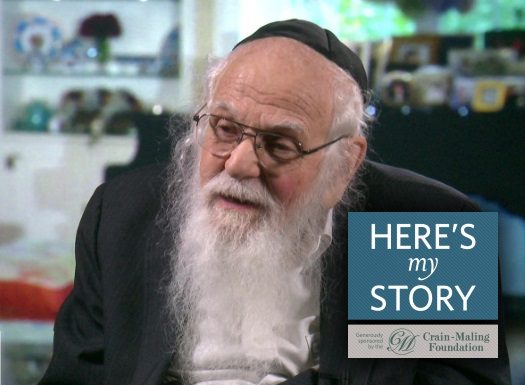 Mr. Shabsi Turner is an architectural engineer who lives with his family in Chicago, Illinois. He was interviewed by JEM’s My Encounter with the Rebbe project in Brooklyn, NY, in July of 2017.

I was born in 1929 in Chicago, where I have lived for most of my life. After high school, I enrolled at Northwestern University to study architectural engineering, and later got a job in the construction industry.

Most of my friends at that time were survivors of the Soviet labor camps or had been taken further east as children, to former Soviet republics such as Uzbekistan, before immigrating to Chicago. Among them was a Belzer chasid who introduced me to the Rebbe’s published talks. I was impressed at how clear the Rebbe made everything sound, and that led me to attend a Chabad class conducted by Rabbi Shlomo Zalman Hecht, a local Chabad rabbi. I found this class most uplifting – in fact, I became totally enamored with it. So much so, that I would go home afterwards and stay up until two or three in the morning reviewing what I had learned.

Naturally, I wanted to meet the Rebbe and, in 1967, I managed to arrange an audience, the first of what turned out to be many over the years.

I didn’t know what to expect, and I was hesitant when I opened the door to the Rebbe’s office, but he said, “Welcome. Sit down.” I didn’t. “I think I’d better stand,” I said, and I stood.

I would just like to say that it is difficult for me to describe what it was like talking with the Rebbe. I had the sense that I was in the presence of a loving parent, a great teacher and my best friend all rolled into one. I felt he meant business, but also that he loved me. And I felt very comfortable talking with him.

At first, he spoke to me in Yiddish, but we began discussing technical engineering terms, which I only understand in English. When he saw that I didn’t understand well enough, he switched to English – his English was grammatically perfect even though he had a strong accent. He asked me various questions about architectural engineering. For example, he wanted to know how a cantilever works. He asked, “A balcony that sticks out of a building without any visible support – why doesn’t it fall down?”

I replied that there is counterweight behind it, with concrete reinforcing rods that stick into the building, so it’s something like a teeter-totter. When you stand there and your weight pushes it down, the other side goes up. Then he asked about a camber, which is the belly that forms during the pouring of a concrete beam. He asked, “Why does it happen?” I couldn’t give a reason, so I told him that I didn’t know.

Then we started talking about my career and about starting my own business. He gave me this advice: “If you work for someone, you are doing the one thing that you know best, but if you are in business for yourself, you have to do all the aspects of the business including those that you don’t know well, like collecting money, which is a difficult thing.” His opinion was that I shouldn’t do it, but he gave me a blessing to succeed at whatever I decided to do.

Later on, I did some consulting and selling of various items, such as pre-cast concrete, granite, stone, etc., and metal doors and frames. The type I sold was not the type which comes pre-assembled but the type which needs to be re-constructed on site. I had trouble with these because they didn’t fit right, and I complained to the Rebbe about it. The Rebbe heard me out and then he said, “Perhaps you should make it like this.” He used either a French or Russian word that I didn’t understand, so he took out a piece of paper and a ruler and started to draw a diagram. When I saw it, I realized that he was describing a compression fitting with an invisible joint. This was amazing to me, because the Rebbe had never seen the problem I was describing, but he’d suggested a solution immediately. Unfortunately, I couldn’t use his idea, because somebody had worked years to develop it and had already patented the idea.

During another audience, when my wife and I went in to see him, the Rebbe said, “Five years ago, you told me about an issue.  What have you done about it?” We looked at each other, and we couldn’t recall the topic.

But the Rebbe did, and he gave us a hint, a clue. I looked at my wife and we were both astounded. After I grasped what he was talking about, I said, “This is shvere arbet – hard work, I haven’t done much on this topic.”

Of course, this we knew – that he worked hard. We also knew that the Rebbe had a fantastic memory. I heard some other people say that they came to the Rebbe and he told them who their grandparents were, although he had never met them before. So, it was no big surprise to us that he remembered a conversation from five years prior, a conversation which we had completely forgotten.

At another audience, my wife said that we would like to do more for Yiddishkeit than what we were doing. And the Rebbe immediately responded to that. He said, “There are Israeli soldiers stationed in the United States, learning advanced weapons technology from the Pentagon. They are young boys, and they are all alone. You could befriend them.”

So we asked, “Where are they?”

His response was, “That you need to find out.”

To make a long story short, we ended up calling the local Israeli Consulate and then the Israeli Military Attaché in Washington. We asked them where these soldiers were located, and their response was: “Ask Chabad. They know.”

In the end, we located those closest to us – who were not that close to Chicago – they were in Ann Arbor, Michigan, four hours away. But they were already serviced by the local Chabad rabbi. However, we learned that the local Israeli Consulate was staffed by Israeli army reservists, and we befriended them, as the Rebbe asked. We visited them and sent them packages for Purim and other gifts. We were even able to convince one family to send their children to a local Jewish school.

Another project we got involved in because of the Rebbe was Camp Gan Israel – both donating and fundraising and, mostly, getting parents to sign up their children as campers. The Rebbe really believed in sending kids to Jewish summer camp, and I recall a talk he gave at a farbrengen on this subject. He said that when Jewish children go to a day school, they may be steeped in Yiddishkeit during the day, but then they return to a home environment that is not Torah-observant. But when these same children go to sleep-away camp, there is no disconnect – they are in a Jewish environment for twenty-four hours a day. And when they return home, keeping Torah comes naturally to them.

Because of the Rebbe, we got involved and had the pleasure of watching first our own children, then grandchildren, and now great grandchildren attending these camps which we helped establish.