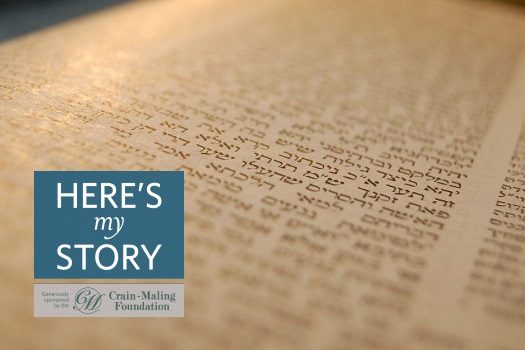 Mrs. Alice Zlotnick is a professional artist presently living in Jerusalem, Israel. She was interviewed by JEM’s My Encounter with the Rebbe project in her home in December of 2006.

I first met the Rebbe shortly after Passover of 1953, after my engagement to my husband, Dov Zlotnick. Dov was a student at JTS–the Jewish Theological Seminary–and he told me that before he met me, he had gone to the Rebbe for a blessing to find the right girl to marry. Now that the Rebbe’s blessing had been fulfilled, he wanted us both to get another blessing for our married life together.

I was twenty years old at the time–quite young. I had come from a long line of Lithuanian Jews, so I was not quite comfortable with this. But I went along with Dov anyway.

Thinking back on that visit now, I remember what an unusual experience it was for me, something of a culture shock. The Chabad Headquarters at 770 Eastern Parkway in Crown Heights looked to me like a yeshivah out of 19th century Europe. I remember seeing a large room filled with tables around which young men sat learning out loud. I looked at this sight, and I wondered how anyone could concentrate with so much noise.

Then we were ushered down a hallway and asked to wait. We waited for quite a while. I assume that the Rebbe never rushed anybody because it was a long time before the people inside left and our turn came.

When we finally went in, the Rebbe proved quite impressive, and meeting him was an experience I will never forget.

The walls in the Rebbe’s room were lined with books. I recall the corner where he sat behind his desk was well-lit. There were a couple of chairs in front of the desk, where we were invited to sit. Although the rest of the room was dim, there was enough light for me to see the Rebbe’s eyes as he spoke. He was tremendously animated. I remember he focused on us, and I do not recall anybody else ever paying me this much attention–an unusual amount of attention.

I don’t remember what we discussed; I only remember the Rebbe and my strong impression of him. That was the first meeting.

Then came the time when the Rebbe had a major impact on the trajectory of my life.

In 1964, while Dov was teaching at JTS, he decided to start a Shabbat afternoon Talmud class in Riverdale for the men in the neighborhood. The class was small at first, attended by just a couple of men, but it quickly grew to about fifteen participants. They followed a study group format–everyone had to prepare the material in advance, and then Dov would expound on it. They would also study various Talmudic commentators, so the class was conducted on a high level. Dov was very proud of this, and the next time he went to see the Rebbe, he told him about it.

The Rebbe listened very carefully, and then asked, “What do the women do during this time?”

Dov answered that the women were in the kitchen preparing the third meal of Shabbat.

“Dov, that’s not good enough,” the Rebbe replied. When Dov came home from his audience with the Rebbe, he informed me: “Alice, the Rebbe said that the women must study too, so you must teach a class to the women.”

“What are you talking about? I’m a professional artist–I’m not prepared to teach a class!” I said.

But after Dov told me how emphatic the Rebbe was that the women must do this, I agreed: “Alright, but you prepare me. Go over the material with me, and I’ll try to teach it.”

That was forty years ago. Since then, as a result of that class, I’ve learned a lot of Mishnah, which is the core of the Talmud. In addition, preparing for the class meant that I got to spend some very special time with my husband, a professor of Talmud, who is well known for his comprehensive knowledge of the Mishnah. One of the books he wrote, The Iron Pillar, is an in-depth study of the Mishnah, which received high praise from scholars in the field.

When word got out that I had established a Mishnah study group, I received a call from the rabbi of the Riverdale Jewish Center, the largest Orthodox synagogue in Riverdale. He asked if I would teach the class at the synagogue. For twenty-five years I conducted this class at the RJC, preparing together with my husband, until eventually I was able to do so on my own. My students read the text of the Bartenura commentary in advance and then I taught additional material that my husband brought to my attention.

Years later, my daughter Karen Kirshenbaum started a Shabbat afternoon class in Mishnah in her neighborhood in Jerusalem. Karen has her Ph.D. in Talmud from Bar Ilan University, and she teaches at various women’s seminaries in Jerusalem. Thirty women attend her Shabbat class, which she teaches on high level. The women prepare and study the text together with the classic Bartenura commentary, as well.

Initially, they started at the beginning of the Mishnah, from Tractate Berachot, and they went straight through the six orders of the Mishnah, studying every single chapter of every tractate, together with the Bartenura. When they had finished the entire Mishnah, I was privileged to attend the siyum celebration.

After that, the class started the Mishnah over again from Berachot. I feel that because the Rebbe suggested to my husband that I do this, he had a hand in my daughter doing it, as well.

The Rebbe was particularly interested in women becoming wellversed in our tradition because generally it is the woman who spends the most time with the children. And even if she has a profession and the child rearing is shared by the parents, the mother still has the greatest influence on her children.

I see this in my own family. Karen’s son, before his Bar Mitzvah, studied with his mother. It took them two years, but he was well motivated, and when his Bar Mitzvah came, they celebrated with a siyum of the
entire Mishnah.

How did our Jewish tradition continue all these years? It happened within families–from parents to children to grandchildren. The Rebbe understood the key role that women play in this process, and it was my good fortune that the Rebbe suggested to my husband that I teach a Shabbat study group.