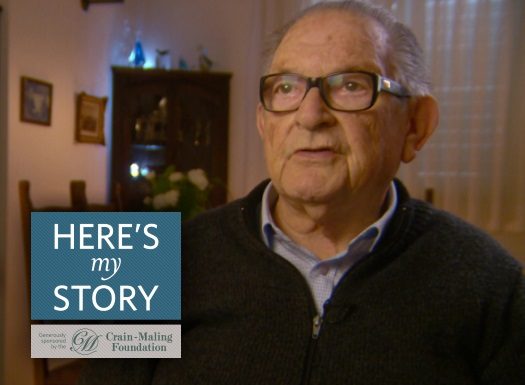 Here’s My Story: A Holistic Approach

Professor Chaim Doron served as Director General of Kupat Holim Clalit from 1976 to 1988. A professor of Community Health at the University of Tel-Aviv, he was interviewed by JEM’s My Encounter with the Rebbe project at his home in Ramat- Gan, Israel, in December of 2012.

In 1976 I was appointed Director General of Kupat Holim Clalit, the leading provider of health insurance in Israel, and as part of my job, I was invited to the United States to lecture on the standards of health services in Israel.

My wife accompanied me on the trip, and when we were in New York, we met our friend Yossi Ciechanover, who served as an Israeli Defense Ministry representative in New York. He asked us if we’d be interested in visiting the Lubavitcher Rebbe, a proposal which we gladly accepted, so he arranged an appointment for us at eleven o’clock on Sunday night.

When we arrived, we were ushered into the Rebbe’s study. The Rebbe was sitting behind a large desk, and we sat down across from him. I remember that from the very first moment we were very struck by the Rebbe’s personality. Of course, we had already heard about his Torah knowledge and his broad general knowledge; we knew that he was a certified engineer and we’d also heard of his great personality. Nevertheless, this face- to-face meeting left a great and lasting impression on us.

Incidentally, I began our conversation in Yiddish, but the Rebbe switched languages and continued the rest of the conversation in Hebrew, which he spoke with impressive fluency. Our meeting lasted more than an hour, much longer than had been arranged. I don’t recall exactly how much time was originally allotted, but I remember the secretary coming in several times to hint that our time was up.

We had come as one of the Rebbe’s first meetings that night, and there were many people waiting after us, but the Rebbe insisted that we cover a broad range of topics at length.

While the conversation touched upon several different subjects, naturally, we began on the topic of health. At the time, with no governmental mandate in place yet, Kupat Holim Clalit served as the health insurance network for three quarters of the Israeli population. Our operation oversaw more than 1,200 clinics and 14 hospitals countrywide, and I guess the Rebbe saw me as someone to who could impact the state of health in the country at large.

The Rebbe started by raising the matter of how medical staff ought to relate to patients. From the way he addressed the matter, it seemed to me that he had received reports that our medical staffs’ bedside manner wasn’t always adequate, and he emphasized the importance of compassion and humanity when interacting with a person who’s sick.

Unsatisfied with just raising the issue, the Rebbe offered a practical suggestion to improve the doctor- patient relationship. Namely, he suggested that doctors be incentivized through setting up an appointment system through which patients can book appointments in advance with specific doctors. You could then offer a premium to medical staff based on the amount of patients they had registered with them in advance.

Of course, today this system has been widely adopted in Israel, but that wasn’t how it worked at the time. We’re talking of a period following a tremendous influx of immigrants, and a serious lack of doctors, mostly in the areas at the border, the villages, and developing cities. In addition, most of the doctors that integrated into the Kupat Holim Clalit clinics were older doctors from the immigrant population. In addition to language and cultural differences, there were also major gaps in the level of certification and professionalism between them and the younger doctors, who were certified in the Israeli schools and worked mostly in the hospitals.

In the wake of this unavailability of doctors, the common method was to resort to urgent care centers, creating a situation of overload and stress. The Rebbe diagnosed exactly what the problem was based on the limited information that he had received, and pointed out that the doctors had become more like Emergency Physicians with a team of triage nurses rather than true health practitioners who build a rapport with their patients and offer them individual care.

The approach that the Rebbe was advocating, of treating patients as individuals and looking beyond their specific disease, is what today we call a holistic approach to medicine.

We also discussed the roles of doctors and nurses respectively. At that time, we were beginning to develop the idea of “family medicine” and the method in which the doctor does not work alone, but as a part of a team of staff. Under this arrangement, it’s the nurse’s job to invest in health advancement, preventive medicine, and tracking chronic patients with home visits.

The Rebbe had heard about this, and expressed a generally positive view about it. However, he did make one important observation: To be cautious of nurses feeling overconfident and providing care for which they are underqualified. While they serve a very important role, they must be aware of their limitations and let the doctors step in where necessary.

We discussed a number of other things covering a range of issues affecting Israeli society. One thing that stands out to me, the Rebbe expressed the importance of rotating power in the government, and avoiding a situation in which one party remains in control for too long. I understood that the Rebbe was hinting to the fact that something big would happen in the near future.

In fact, around a year later there was the major political revolution in which Menachem Begin unexpectedly rose to power, effectively ending the Left’s domination in the years hitherto, and establishing a right wing government for the first time.

When we left the Rebbe’s room, chasidim were clamoring to hear what the Rebbe had spoken to us about. The experience of visiting the Rebbe has been etched on my mind since then. The Rebbe was a very great man, and it was captivating to listen to him speak. We were very impressed by his understanding of everything connected to the situation in Israel, and more so, how close they were to his heart.