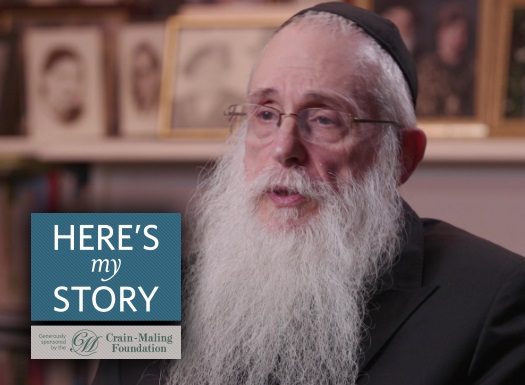 A Chabad emissary in Australia for nearly fifty years, Rabbi Avrohom Glick served as principal of Yeshivah College of Melbourne from 1986 to 2007. Presently he teaches Chasidut in Yeshivah Gedolah, Ohel Chana and Cheder Levi Yitzchok. He was interviewed by JEM’s My Encounter with the Rebbe project in his home in Melbourne in July of 2016.

I grew up in Melbourne, Australia, and as a teenager I went to the United States in order to study in yeshivah. At first, I enrolled in Telshe Yeshivah in Cleveland, Ohio, but in 1964, after a number of visits to Chabad-Lubavitch in Brooklyn, I decided to switch. I was drawn to the Rebbe and to the study of chasidut. I saw that the Chabad students were very serious about their Torah learning, and their “awe of heaven” made a very strong impression on me; I wanted to learn among them.

In 1968, I married a Chabad teacher from Worcester, Massachusetts and on the Rebbe’s instructions, we moved to Worcester. My wife returned to her teaching job, and my role included among other things, teaching in the day school, adult education, and organizing youth activities in the community. I would also give classes in Chasidic thought at various universities in Boston.

In 1970, a position opened up in Australia – at the Chabad day school, Oholei Yosef Yitzchak – and I was invited to return home to Melbourne by Rabbi Yitzchak Dovid Groner, the Chabad emissary there. I asked for and received the Rebbe’s approval and blessings.

After this was settled and we started preparations for the move to Australia, I began to feel as if I was just treading water in Worcester. I wound up my activities and, since it was not appropriate for me to start any new projects, I felt betwixt and between, neither here nor there – not yet gone but with my mind already elsewhere.

During a personal audience, I confided my state of mind to the Rebbe, who responded, “In the Torah we find that during the forty years the Jews were wandering in the wilderness, they would sometimes stay in a place for just one day, yet they would go through the tremendous trouble of setting up the Tabernacle each and every time. The Talmud derives many laws from this, including the principle that, if you find yourself in a place even for just one day, it is as though you are fixed there permanently.”

The Rebbe concluded, “Nit azoi vi men shteit mit a gepakte tchemidan greit arois-tzu-foren – Not as though you are standing with a packed suitcase ready to go.

The Rebbe taught me a very important lesson – he made it clear to me that every day is an opportunity not to be missed. And that’s how I tried to behave in Worcester during my last days there.

Naturally, Rabbi Hershel Fogelman, who was the Chabad emissary in Worcester, was not very happy that we were leaving, but he accepted the Rebbe’s decision to send us to Australia. Subsequently, during his next audience with the Rebbe, an interesting exchange took place. The Rebbe said to him, “I want to give you a special thank you.” He was surprised by this, as it was the Rebbe’s way to urge his emissaries to strive for more, rather patting them on the back. What was the Rebbe thanking him for?

The Rebbe explained: “I recently told a young couple that they should leave Worcester and move to Melbourne. I was expecting to get a letter from you full of arguments against this move. But since you accepted my directive without complaint, I want to thank you and also to assure you that their success in Melbourne will be good for you in Worcester.”

Whenever I saw Rabbi Fogelman after that – we remained very good friends and I saw him each time I made a trip to the United States – he would tease me, “Glick, I know exactly when you’re working hard and when you’re being lazy, because the Rebbe told me that your success in Melbourne would be good for me here. So when things are difficult for me, I think of you!”

Initially, I taught in the Chabad Yeshivah day school and coordinated various youth activities. After three years, my role became more administrative – as the school’s coordinator of Jewish Studies. A significant part of my day was spent on disciplining students, and I began to feel that I was not using my time in the most productive way. Instead of being an educator, I felt I was a policeman.

When I mentioned this to the Rebbe on my next trip to the US, he answered: “Plowing is one of the 39 categories of work that are forbidden on Shabbat. This however, raises a question. The general rule is that an activity that is destructive is not considered work and is not forbidden by the Torah. Plowing a field, which involves breaking up the earth, seems to be a destructive act, which should therefore not be forbidden on Shabbat?

“The answer,” the Rebbe continued, “is that plowing is an essential prerequisite to planting. Seeds won’t grow if the ground is not prepared properly. And if seeds won’t grow, there will not be any wheat and there will not be any bread. Discipline in school works the same way. It’s a necessary prerequisite for teaching, and without it, proper teaching and learning cannot take place. You are not wasting your time in maintaining discipline. Far from it, as you are actually facilitating teaching and learning.”

The Rebbe, in just a few words, reassured me and taught me a profound lesson, namely, that what might seem on the surface like a negative task, is, in fact, constructive and serving a positive end. Just like the Rebbe’s earlier lesson, this too has stayed with me and helped me tremendously throughout my professional and personal life.