« Video: Week 4 at Gan Yisroel-New York
Picture of the Day: Mashpia and Mazkir » 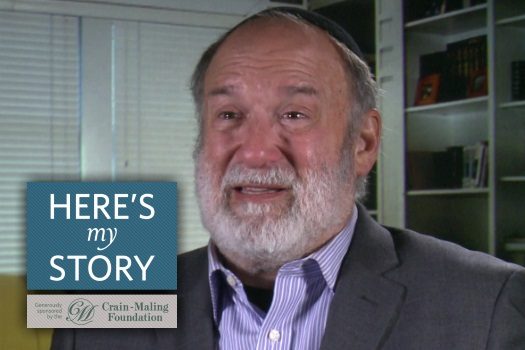 Mr. David Mayer lives with his family in Los Angeles, California, where he worked as an executive in the toy industry for over three decades. He was interviewed in the My Encounter studio in January of 2016.

In 1975, when I was 20 years old, I had the good fortune to meet the Rebbe’s emissaries, Rabbi Benzion Friedman and his wife Esther, in Lomita, California, and that meeting changed my life.

I had come from a very Reform background — I say “very Reform” because my great-grandparents were part of the original Reform Movement back in Germany. I received very little Jewish education from my father who got very little Jewish education from his father. In fact, when I asked my grandfather which one of the Twelve Tribes of Israel I was from, he had no idea what I was talking about. I, myself, when I saw a picture of a friend in front of the Kotel wearing a tallit and tefillin, thought: “Why is he dressed like an Arab?” I didn’t recognize what he was wearing. That’s how little I knew.

I did have a strong Jewish identity mostly because of my mother who came from a Zionist family. One branch of her family founded Zichron Yaakov, a town about 20 miles south of Haifa, in Israel, and when I was 19, I went to Israel as a volunteer during the Yom Kippur War where I learned some Hebrew.

When I came back I met Rabbi Friedman, and that’s when I began a journey back to my Jewish heritage, which I describe as a kind of awakening.

For Passover of 1976, I came to Crown Heights and had the first opportunity to see the Rebbe. At that time I was able to pray together with the Rebbe in the small synagogue at ‘770,’ and to participate in a farbrengen with him — a gathering which the Rebbe addresses, sharing his Torah thoughts and directives. These were very special experiences. But it was not until I got married and we had our first child — who was born in November 1984 — that my wife and I had a direct encounter with the Rebbe that profoundly impacted our lives.

Our son was born with Down syndrome, which is a very devastating diagnosis for any parent to hear. Anyone who has had this experience knows that you first have to go through a mourning process for the child that you wanted to have, and then you can start embracing the child that G-d gave you. So, both my wife and I were going through a difficult time then.

In February 1985, when the baby — whom we named Avraham after my father-in-law — was two-and-a-half months old, we decided to travel from Los Angeles to Florida by way of New York. We stopped in Brooklyn with the hope of getting an audience with the Rebbe and receiving a blessing for the baby.

As it turned out, an audience was not possible, but we were instructed to wait outside the Rebbe’s office and, when he passed by upon his return from the synagogue after Minchah prayers, to ask him for a blessing then.

Seeing us standing there, the Rebbe stopped. He looked at our Avremel, took a coin out of his pocket and put into the baby’s hand. But, because of the Down syndrome, Avremel didn’t have the muscle tone to hold onto the coin, and it fell.

Before I could react, the Rebbe stooped down and picked up the coin from the floor. He put it back into Avremel’s hand and this time folded his little fingers around it. And then the Rebbe leaned toward my wife and said, “These children are my generals. You shouldn’t worry.” Then the Rebbe said something more which she couldn’t quite make out, but she thought he said, “He will be a blessing.”

He certainly became a blessing. Today, he is 31 years old, and he is the light of our lives. He is our blessing. He is also independent, takes the bus and train by himself and has a job. When I meet other parents of Down syndrome children, I say to them, “If the doctors came up with a pill that would make my son ‘normal,’ I would give it to him because that would be the best thing for him, but I would miss him. Because I love him the way he is. He is such a blessing to us.”

This is what the Rebbe helped us see — our appreciation of Avremel stems from the Rebbe.

He called such children “my generals” in what I believe is a reference to his Tzivos Hashem (“Army of G-d”) campaign to engage children in Judaism. It seems that the Rebbe considered children like Avremel the generals of that campaign because they were special.

The Rebbe coined the phrase “special” for the children like Avremel who, before he used that term, were called “retarded.” But they are indeed special, and they are indeed blessed.

I began to understand why some Jews, especially from the Sephardic tradition, view such children as blessed, because their innocence allows them to see the world the way G-d made it, not the way it appears to be.

Avremel is truly special, truly a blessing. He is the best thing that has ever happened to us. But that is not the way I saw it back then, in February 1985 — not until the Rebbe opened my eyes to the gift we had just received from G-d.

« Video: Week 4 at Gan Yisroel-New York
Picture of the Day: Mashpia and Mazkir »