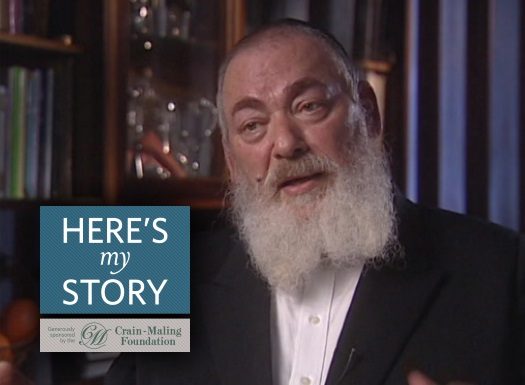 Rabbi Ahron Avigdor Cousin is a veteran educator from London, England. He now lives in the Crown Heights section of Brooklyn with his wife, Malka. He was interviewed by JEM’s My Encounter with the Rebbe project at his home in the summer of 2007.

While studying at the yeshivah in Manchester during the early 1950s, I noticed that the Lubavitcher students were somehow different from the others. At the time, there was a great mix of students in the yeshivah representing various streams of Judaism, many of them survivors of the Holocaust — but the Lubavitchers stood out. They seemed to me more sincere and more serious — when everyone else was out playing cricket, the Lubavitcher students would stay behind studying the latest discourse from their Rebbe.

I wondered what they knew that I didn’t, and eventually I found out — chasidus, the teachings of Chasidism. That’s when I decided that I wanted to become a chasid and learn seriously in a Lubavitch yeshivah.

Many people tried to dissuade me from this path. They said that the Lubavitch way was very different from what I was used to. But I stood firm in my resolve and, in 1956, I came to learn at 770, the Lubavitcher Yeshivah in New York.

Immediately upon arrival, I received an audience with the Rebbe. He had taken over the leadership of Chabad- Lubavitch just five years prior, and it he was remarkably accessible. I explained who I was, asked his secretary for an appointment with him and, a short while later, I was given an appointment. When I saw the Rebbe, one of the questions I asked him was whether I should change the prayer-book I was using for the Chabad liturgy. I was using the standard Ashkenazi version at the time, but I felt I should change to the Chabad prayer liturgy which follows nusach Ari. The Rebbe said it would be a positive change but that I shouldn’t switch right away. He suggested that I change at the start of the new month which was a few days later.

With that he started looking through his desk, but he found no prayer-books there, and he called in his secretary to bring one, but he also couldn’t lay his hands on a spare copy just then.

So the Rebbe said, “Don’t worry — I will make sure that you receive one.”

I went outside, and I sat down to write everything the Rebbe had said to me during the audience, so I had an exact record. After about ten minutes or so, I heard a chasid calling my name — “Cousin! Cousin! Where is Cousin?!” I responded, “My name is Cousin,” and the fellow said, “Come quickly, the Rebbe wants you.”

I returned to the Rebbe’s office, and the Rebbe’s secretary ushered me in. The Rebbe was in a middle of a conversation with someone, but he interrupted it. He stood up and handed me a small red prayer-book. He said in Yiddish, “Zolst davenen b’simcha un matzliach zayn — You should pray with joy, and you should be successful.”

I took the prayer-book, which I have to this day. It is very precious to me, but it’s quite worn now, so I only use it on special occasions.

While I was studying in the yeshivah, I became involved in the Rebbe’s project which was initiated by his father- in-law, the Previous Rebbe, known as Wednesday Hour or the Released Time Program. I was one of the yeshivah students who used to mentor a group of Jewish children in Coney Island on Wednesdays. We had a very large group of boys and girls participating — we would take them out of the public schools in the area and bring them to a nearby synagogue where we would teach them to say blessings, recite the Shema prayer, and other things like that. At the end of the session, we would reward their participation with prizes.

One year my birthday fell on a Wednesday, and I asked the Rebbe if I should participate in the Wednesday Hour that week. Maybe it would be better for me to spend the special day studying Torah?

The Rebbe’s response was most amazing to me. He said in Yiddish, putting a great deal of emotion into his words, “Avadeh zolstu gayn — Of course, you should go!” In fact, he said that I should teach the kids something extra special precisely because it was my birthday.

Clearly, to the Rebbe, the Wednesday Hour was a very important project. I recall that one yeshivah student, a friend of mine, once wanted to opt out of it. He wrote to the Rebbe that he didn’t think that reciting blessings with the children and giving them prizes accomplished anything much. Furthermore, it disrupted the order of his studies. It took three to four hours out of his day — travelling to Coney Island and back — and he felt his time would be better spent sitting and learning in yeshivah. He also argued that the thought of knowing he would have to disrupt his studies preyed on his mind all the week. So he asked the Rebbe’s permission to be exempt.

He didn’t receive it. The Rebbe wrote back to him: “I want you to know that all the souls in the Garden of Eden – even the soul of Moses — are envious of you, because you have the opportunity to recite the Shema with little Jewish children. The mitzvot you do with those precious children certainly will have an everlasting effect.”

When this fellow showed me the Rebbe’s letter, it made a very deep impression on me — I realized right then how important it was to teach little children, how important Jewish education was. Eventually, this realization led me to a long career in the field.

I became a teacher, and after a few years, the headmaster of a boys’ school, a job I held for many years.

There was a point along the way when I thought of going into real estate investments with my older brother, and I wrote to the Rebbe to ask his advice on this matter. I said that I wasn’t planning to leave education altogether, just to combine service with business, so to speak, in order to better provide for my large family.

The Rebbe wrote back, “It’s a pity that you should begin leaving the holy work initiated by my father-in-law for something so mundane.” I guess the Rebbe saw that once I got involved in business, I would begin to spend less and less time in education until I left it completely.

I took the Rebbe’s advice, and I told my brother that I couldn’t join him. And even though I could have made a lot of money since people who were in that business generally doubled their investment, I have no regrets. I see the success of my students — so many students over the past fifty years — and I am happy with what my lot turned out to be.

And, most of all, I am grateful to the Rebbe for putting me on the right path, and I am grateful to Chasidus for the wonderful way of life that it has given me. There is nothing like chasidic teachings to inspire and illuminate and to elevate a person above the mundane. And, for this gift, I will be forever grateful.