« 104-Year-Old’s Unexpected Final Mitzvah
The Untold Story of the ‘Are You Jewish?’ Guys » 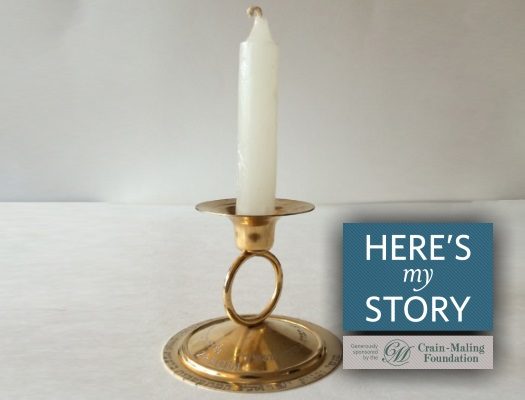 Mrs. Esther Sternberg is the director of the Shabbos Candle Lighting Campaign, a division of the Lubavitch Women’s Organization. She lives with her family in the Crown Heights section of Brooklyn. She was interviewed by JEM’s My Encounter with the Rebbe project in her home in July of 2012.

My name is Esther Sternberg. I’m very fortunate to have been born and raised in Crown Heights. My father, Rabbi Shneur Zalman Gourary, was close to the fifth Chabad Rebbe, Rabbi Shalom Dovber and the Previous Rebbe, Rabbi Yosef Yitzchak Schneersohn, from the very moment he became Rebbe in 1920; and to our Rebbe, Rabbi Menachem Mendel Schneerson, from the very moment that he became Rebbe in 1951. So being brought up in this kind of a home, I had a very, very strong feeling for the Rebbe – a feeling of great respect and love. I felt that to be able to do something for the Rebbe, was an honor and a privilege.

On September 11, 1974, a week before Rosh Hashanah when the Rebbe was giving a special blessing to a Chabad women’s gathering, the Rebbe suddenly started to speak about the fact that we live in a time that is very dark spiritually, and we have to bring more spiritual light into the world. He said he wanted to introduce a campaign that would reach every Jewish woman and girl, as young as three years old, and inspire them to light Shabbat candles. And he went on to say that now many women don’t do it — either because they were never taught, or because they came to believe that in America it’s not applicable. He told us that we should go out and find these women — who either never learned to do it or who just stopped doing it – and make sure that they light Shabbat candles to bring more spiritual light into the world.

Hearing him speak, I remember getting very excited about this beautiful idea and wanting very much to do something about it. Honestly, I didn’t know what to do or how to do it. But, as it happened, one thing metamorphosed into another, and I got very involved in this campaign.

The next day, I got a call — as one of the co-presidents of the Lubavitch women’s organization — from the Rebbe’s office that the Rebbe would like for us to prepare an ad to go into a Yiddish newspaper telling the general public about his message — that Jewish women and girls should be lighting Shabbat candles from age three and up. And when I got this call, I was very taken aback because I didn’t know how to put an ad together, especially for a Yiddish newspaper. So I checked around and I was referred to Rabbi Nison Gordon who was an editor at the Yiddish newspaper, Der Tog Morgen Journal. I called him and told him my dilemma. He said, “You know what? Just write down for me what the Rebbe said and bring it to my house, and I’ll take care of it.”

I transcribed what the Rebbe had said, I typed it up, and Rabbi Gordon put together a beautiful ad with which the Rebbe was extremely satisfied, and I got the credit. So I felt very good that I did something for the Rebbe.

A few days later, at the farbrengen that the Rebbe conducted on the second day of Rosh Hashanah, he said that, because of the new campaign that he started, he would like to give a gift to all the girls that start to light candles — two dimes of his own money. And he announced that anybody who was a teacher or counselor, or anybody who had anything to do with youth groups, should write down the names of participating girls and he will distribute two dimes for each girl.

Because I had taken care of the ad, it seemed to be the natural thing that Rebbe’s office should call me and ask me to find a location for the distribution of the money, which would take place the next day. I couldn’t think of another place, so I said, “It could be at my house.” So, boxes and boxes of dimes packed up into little plastic containers arrived, and people came day and night with their lists of girls to get the dimes that the Rebbe had given.

And that’s how it started. It was called the NeSheK Campaign because it was an acronym for Neirot Shabbat Kodesh, meaning the Holy Shabbos Candles.

The morning before Yom Kippur, when all the men went to get lekach, the honey cake that the Rebbe always gave out at that time, I also went. The reason being, that many years earlier the Rebbe had requested that I come as well, so from then on, I would go annually. When I passed by the Rebbe, he gave me a big smile, and then he asked me, “Do you have enough dimes?” For a moment I was confused. I was expecting the lekach and the very awesome blessing that went with it – the blessing for a good year ahead – so I couldn’t understand why he was asking about money. And then it dawned on me that he was asking about the dimes for the girls to light Shabbat candles. So I said, “I just have a few more left.”

Then the Rebbe put his hands in his pockets and extracted packages and packages of dimes. He had been standing with all that heavy weight in his pockets since 10 a.m. and here it was 1 p.m. He was 74 years old, and yet he stood with all those dimes weighing him down, so he could give them to me whenever I came, because maybe there were girls who would want to light candles before Yom Kippur, and maybe they won’t do it without getting the dimes.

And that’s when I saw how the Rebbe cared about every single girl. He was worried that maybe if she wouldn’t get the dimes before Yom Kippur, she won’t do it. It was so important to him that they light – to bring that holy light into the world.

After that, the campaign really took off — we produced a brochure with candle-lighting times and we began to give out candleholders which were manufactured for us by Mr. Ted Kupferstein. The Rebbe had designed that candleholder and we are still producing it today, years later, the very same one.

Mr. Kupferstein once calculated that he manufactured eight million candleholders for us. And that just goes to show what a great success this campaign was. And the Rebbe was very happy with that, and I felt incredibly privileged that I could make the Rebbe happy, and have a part in his initiative of bringing so much light into this world.

« 104-Year-Old’s Unexpected Final Mitzvah
The Untold Story of the ‘Are You Jewish?’ Guys »