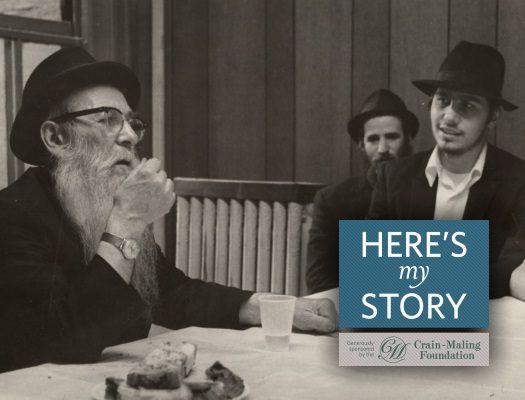 Rabbi Meilech Leib DuBrow, a KosherFit Master Coach, is the founder of Kosher Health & Fitness, based in Los Angeles, where he was interviewed by JEM’s My Encounter with the Rebbe project in September of 2011.

I grew up in a Jewish family that was not Torah-observant and I had no real religious upbringing. I did not become interested in Judaism until my first year of college at the University of San Diego, when I began exploring Chasidic teachings. This eventually led me – in 1971 – to Chabad and to the Chabad yeshivah in New York, Hadar HaTorah.

At Hadar HaTorah, everyone was in awe of the Rebbe. And when it came time for us to have a private audience with him – which usually happened on the occasion of our birthdays – we made spiritual preparations for weeks. We learned the Tanya, prayed, and wrote out our questions or requests in brief letters.

I myself wrote the Rebbe a fifteen-page letter in which I asked him a number of questions. One had to do with changing bad habits. Another had to do with living a life of joy. And a third had to do with a relationship I had with a young woman back in California. She came from a Reform background, and she looked askance at my foray into Chasidism.

In answer to my question regarding changing bad habits, the Rebbe said, “You have to have a firm resolve in your heart of hearts to change any inappropriate behavior. You have to identify what you are doing that is wrong, and you need to avoid those situations which bring about this behavior.” Years later, his answer became the core of my coaching practice. I boil it down to “remove and refocus” – remove yourself from the situation and refocus on what’s appropriate. That is what the Rebbe taught me.

In answer to my question regarding living life joyously, the Rebbe said, “Learn the chapters in the Tanya which deal with happiness.” These are chapters twenty-six through thirty-two in the first part of the Tanya, the seminal work of the 18th century founder of the Chabad Movement, Rabbi Schneur Zalman of Liadi. “Learn them two or three times, and they’ll make a significant difference. You will see that the happier and more joyous you become, the more your capabilities will increase and the more success you will have.” I did as he asked and found that he was right. Today, I call these chapters the “happy chapters,” and they form another part of my coaching practice.

Then the Rebbe came to my question about the young woman. When she had learned that I was going to see the Rebbe to discuss our relationship, she wrote a letter to me. It was not a long letter– just about a page and a half – but it put forth her feelings on the matter. And I had included her letter along with mine.

As I recall, when I entered the Rebbe’s office, my letter was lying on his desk. There was also a long credenza to the right of the desk, where hundreds of letters in legal folders were arrayed like a giant accordion across the top. While talking to me, and without looking, he reached over and produced my girlfriend’s letter. “This belongs to you,” he said, handing it to me.

He then began to answer my question. And, basically, his answer was composed of three parts.

“First of all,” he said, “a wife is not a student. In all matters that your wife should be an expert – all the things that should come naturally to her – this young woman is not, and you would have to teach her. And that’s not a correct relationship between a husband and wife.”

In other words, he was saying that each one has to know and understand the other’s vision for life and support it one-hundred percent. They each don’t have to share the same vision for their lives, but they have to want to help the other person achieve his or her vision.

“When a couple has such a mutual understanding,” the Rebbe said, “then there’s a bond, there’s a foundation for a lasting marriage.” That was the second part of his answer.

The third part pertained to my girlfriend’s statement that she could never keep a kosher home and that the Rebbe would probably break us apart for this reason.

Addressing this, the Rebbe said, “Please tell her that my intention is not to separate you from her, or her from you. However, I do believe that, in continuing this relationship, you are doing her harm. You are confusing her, and thereby preventing her from seeing her situation with a clear vision. And this is keeping her from finding a more suitable match.”

I didn’t exactly understand what the Rebbe meant until years later. After I broke off the relationship, I didn’t see this young woman for many years. And then, suddenly, I ran into her by accident. She had two children in tow, and she told me that within two months of us breaking up, she met and married a very fine fellow. She added, “And do you know what I demanded of my husband? That we keep a kosher home.”

Although she had declared to the Rebbe that she would never keep a kosher home if married to me, she made it a requirement of her marriage to him.

Clearly, this is what the Rebbe meant when he said that she could not see her path clearly because of her confusing, emotional involvement with me, which was confusing her. Only when we were apart was she able to identify her true desire.

Yet the Rebbe understood all this. Needless to say, this also become a core part of my coaching practice.

Before the audience was over, the Rebbe told me that I needed to set up a fixed program of Torah study for myself and adjust it according to changing circumstances in life.

In some ways, this was the most important advice he gave, because I have used it throughout my personal and professional life. Any time I begin a new undertaking or project, I make up a schedule and then I adjust it every two or three weeks. If I don’t, I find that my productivity drops off – it’s as if all the inspiration for the project disappears.

In an audience of about fifteen minutes, the Rebbe put my whole life on track. He taught me how to relate to life, how to mend bad habits, how to live joyfully, how to conduct myself in a marital relationship, and how to organize my life as a whole.

Forty-five years later, the Rebbe’s teachings are still with me, and they are the foundation of my coaching practice, continuing to improve the lives of all the people who come to me for professional help and advice.