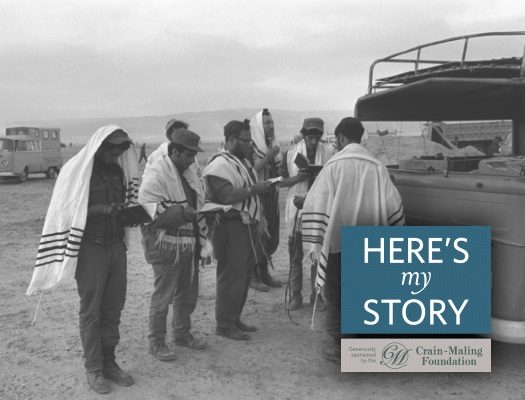 Mrs. Zlata (Freiman) Hertzel is the principal of the Chabad Girls School in Nazereth Illit, in 1996 her husband, Meir, passed away. She was remarried to Rabbi Yeshayau Hertzel, the Chief Rabbi of Nazaereth Illit, where she was interviewed by JEM’s My Encounter with the Rebbe project in May of 2015.

In 1973, just before the outbreak of the Yom Kippur War, I had traveled from Israel (where I was living) to New York to attend my brother’s wedding, and while there, I came to see the Rebbe.

Before the audience was to take place, Rabbi Leibel Groner, the Rebbe’s secretary, instructed me to write down my requests on a piece of paper which would be handed into the Rebbe in advance. I did as he instructed – I wrote that I was married with children, that I was teaching in the Chabad school in Lod, and that my children were in daycare which was costing more than the money I was making. I wanted the Rebbe’s advice – should I leave my job and stay home with my kids, instead of borrowing every month to make ends meet?

When I walked into the Rebbe’s office, he had a big pile of letters on his desk and he reached into it to extract my letter – he pulled it out just like that without even looking for it. He read it quickly and then answered my question with this statement:

“I see you are teaching the children of Israel at the school Reshet Oholei Yosef Yitzchak, which is named after my holy father-in law,” he began. “You should know that the education of Jewish children is a conduit for blessing – both material and spiritual – for you and your family for generations to come.”

Then he repeated those words again, and I felt that the audience was over.

It was only after I left that the Rebbe’s words started sinking in. I thought: “The Rebbe is telling me that my job educating children is a conduit for blessings. So clearly, there is only one thing I can do – keep working.” I called my husband, Meir, and after I told him what the Rebbe said, he concurred with my decision.

Before I could return to Israel, however, the Yom Kippur War broke out and the news we were hearing was not good.

My husband was drafted into a combat unit on a moment’s notice and, because I was still in New York, he distributed our children amongst our neighbors and relatives. I was informed that he was sent to the front lines at Ismailia, Egypt but that’s all I knew. I immediately asked Rabbi Groner for another audience with the Rebbe, but he could not schedule it as I had just been to see the Rebbe a few days before. However, after I broke down in tears, he suggested that I wait outside the office and ask for a blessing for my husband when the Rebbe came out.

My heart was pounding, but I mustered the courage to approach the Rebbe as he passed by and make my plea. The Rebbe responded, “When you return to the Holy Land, you will find that all your loved ones are healthy and whole. Be sure to keep in touch with me and let me know the good news. You can call me collect.”

He said this three times – once in English, once in Yiddish and once in Hebrew – and I knew his words would come true. I was trembling with excitement because I was sure it was going to happen exactly as he said. And indeed it did.

I had a hard time getting a plane ticket back to Israel because all the flights were commandeered for returning soldiers, doctors and other essential personnel. But I begged the airline – telling them that my husband was in combat and I had no idea where my children were – and so they let me on the plane, even though I would have to sit on the floor.

Once I was on the plane, a soldier gave up his seat for me, and I told all the other passengers what the Rebbe had said. I believe they were greatly encouraged by his words. Even people who were not religious. All the men present put on their yarmulkes – those who didn’t have them covered their heads with napkins – and the plane turned into one praying synagogue. It was very amazing and moving to see this.

At some point during our flight, the plane started zig-zagging in the sky because we had encountered a dogfight between our planes and Egyptian planes. I was so scared that I burst out crying when this was happening, but one of the soldiers said to me, “Why are you crying? Your Rebbe told you that everything would turn out all right for you and your loved ones.” And that reminder calmed me down.

When we landed, the airport was absolutely dark, and there was no public transportation of any kind – everything had been turned over to the war effort. But I managed to make my way home, and I located my children.

The war lasted close to three weeks. When the dust settled, though many Israeli soldiers had been killed and injured, my husband came home safe and sound just as the Rebbe said he would. As the Rebbe had requested, I made sure to call New York to report that all was well with my family,.

After the war, I returned to work, and I kept on working. I have now been a teacher in the Oholei Yosef Yitzchak system for thirty-five years. I never wanted to block the conduit that was bringing blessings to me and my family. Yes, there were financial difficulties at the beginning, but after a time, my salary increased and I no longer needed to borrow money to send my children to daycare. I saw the blessings increase from year to year. I saw my children growing up, being educated, becoming successful in marriage, in raising their own children. I saw the Rebbe’s blessing in action from generation to generation.

And today I would say to anyone involved in Jewish education: “It’s a huge thing that you are doing; it’s the most important thing in the world. Our children are our most valuable treasure, and they are in your hands.”

For this reason, I never retired. People say to me, “What? At your age, you are still working? How do you have the energy for this?” And I answer, “I do it for the blessing and for the happiness it brings me.”

Today, I live in Upper Nazareth (Nazareth Illit) where I am the principal of a girls’ high school. The girls are bussed in from the entire region, and they are so pleased to come, so pleased with the school – the good education, the good teachers, the good atmosphere. Our school even won a regional prize for excellence. And I really see the Rebbe’s blessing all around me, still flowing after more than forty years.